A controversial paparazzo who has previously been banned from flying with several carriers has allegedly had his car attacked by a family member of cricketer David Warner. And other media tidbits of the day. 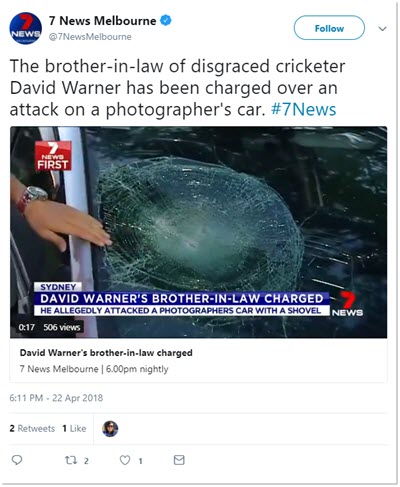 The 21-year-old paparazzo was banned from Qantas and Virgin last year and investigated by the AFP after he posed as Bachelorette Sophie Monk to check into a flight and access the Virgin lounge.

M+C unfair dismissal case settled. An unfair dismissal claim between spinners M+C Partners and Asher Moses, a former executive and former Sydney Morning Herald technology journalist, has settled. Moses sued the company in the Federal Circuit Court, saying he was sacked after he informed his bosses he was suffering depression, and that he wasn’t properly paid out his entitlements. The spin and tit-for-tat got messy in the court filings, with M+C accusing Moses of being unreliable and showing up to work while under the influence of cannabis — claims Moses denied. In a joint statement on Friday, M+C and Moses announced an “amicable settlement”, with confidential terms.

Journo shot dead in live broadcast. A journalist was one of 25 people killed during protests in Nicaragua overnight. Angel Gohana was broadcasting live on Facebook from the latest in four days of demonstrations, and was hit by live ammunition fired into the crowd — the protesters have alleged police were firing live rounds.

Footy Show’s dismal numbers corrected. There was a coding error with The Footy Show last Thursday which meant the late editions in each market (i.e. the NRL show in the southern states and the AFL show in Sydney and Brisbane), the audience was averaged across early and later editions, trimming the numbers for both programs.

Glenn Dyer’s TV ratings. MKR (1.89 million nationally) did it again, this time aided by a slide night for Sunday Night on Seven (1.44 million) and its rather amazing story on Kitty Sullivan (of The Sullivans). That out rated The Voice on Nine (1.57 million, a solid effort) and 60 Minutes — 882,000, not so solid.

In the morning, Insiders was an easy winner — 523,000 watched nationally and saw a masterclass of interviewing by Barrie Cassidy with Kelly O’Dwyer, the Financial Services Minister.

And the Wankley goes to… viral ads, and the 7.30 whispering campaign

I think the header should refer to cricketer Steve’s brother, Mark Warner.

“…showing up to work while under the influence of cannabis — claims Moses denied. In a joint statement…”

An amusing choice of words.

yeh, does sorta stand out don’t it?

Just got back from Nicaragua (to home base in San Salvador) and following events there closely. The report(s) from The Guardian’s Managua correspondent are disappointing to say the least. The journalist shot was one working for Sandinista media, and was targeted by the right wing demonstrators some of whom come to the demonstrations armed. (Disturbing video here: https://www.youtube.com/watch?v=4ZQvwIb0GUU&feature=youtu.be).
Only fleeting mention of the issue that triggered the demonstration – reforms to the social security and pension laws. The Sandinista government is still open to negotiate with COSEP, the business council who walked out of the talks a week ago. The Sandinistas proposed free medical services and procedures for pensioners (including complex ones like hip replacements) to be covered by a 5% impost on the pension and raising employer contributions to the pension fund to 3%. The business council wanted to raise the retirement age by 5 years and to privatise the clinics. Many of the demonstrators seem to be unaware of these issues. Daniel Ortega won a clean Presidential election in 2016 with a 70% vote. The current disturbances are viewed from within Nicaragua as an attempt to destabilise and delegitimise the government as was attempted in Venezuela some years ago, with armed and violent right wing opposition groups. Observers expect the current situation to calm down over the next few days.