Colleagues have remembered the life and work of sports commentator Darrell Eastlake who has died, aged 75. And other media tidbits of the day.

Vale Darrell Eastlake. Nine Network sports commentator Darrell Eastlake has died aged 75, the network has confirmed. Obituaries published this morning for the sports broadcaster who retired in 2005 have remembered him as excitable, larger-than-life, a storyteller, versatile, and iconic.

The revolving door. Business commentator Michael Pascoe, who just this week filed his last column as Business Day contributing editor for Fairfax, has found a new home for his columns at free news website The New Daily. Pascoe’s column was cut last month under new executive editor James Chessell, who told him it was down to a tight budget, but which Fairfax later reiterated as instead a “one-off decision based on a number of factors”. 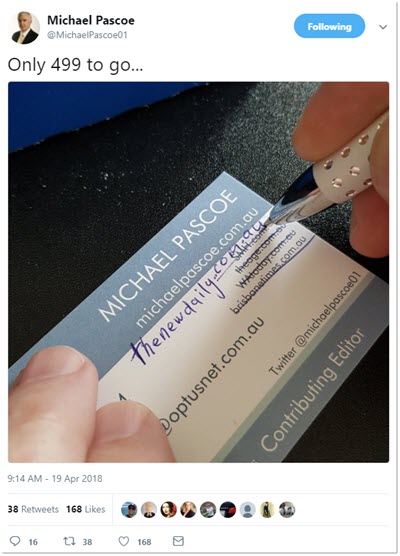 His first column as contributing editor will be published tomorrow.

CBS renewal relief for Ten. Whew, the fevered brows at Ten Network just got less fevered with the news that its US parent, CBS has renewed most of its line up (and Nine and Seven will be happy too).

CBS has announced it will renew 11 series for 2018-19 — Blue Bloods, Bull, Hawaii Five-O, Madam Secretary, MacGyver, NCIS: Los Angeles, NCIS: New Orleans, Survivor, The Amazing Race (Seven here), 48 Hours, and 60 Minutes. Criminal Minds (Seven) remains in limbo, as it has done for the past five years before being picked up for a single season late in the process. — Glenn Dyer

Regulator investigates RT. RT (formerly Russia Today), a Kremlin-funded TV network which is broadcast around the world, is being investigated by the British regulator Ofcom in seven different cases regarding impartiality. RT has a licence to broadcast in the UK, where former Russian spy Sergei Skripal and his daughter Yulia were poisoned last month. Ofcom said the investigations were prompted by a significant increase in the number of programs on the network “warranting concern” since the poisoning, in which Russia denies any involvement.

Polls out for AP. Wire service Associated Press has warned its journalists not to write stories based entirely on polling numbers. The new guidance note in its style book says: “Poll results that seek to preview the outcome of an election must never be the lead, headline or single subject of any story.” The new advice follows the high-profile polling failures to correctly predict the outcome of the 2016 US election, the Brexit referendum and the Scottish independence referendum.

Glenn Dyer’s TV Ratings. Seven easily won the night and the week too with My Kitchen Rules grabbing 2.389 million nationally and over 1.6 million in the metros. End of night. Tonight though is woeful for a ratings period. Thankfully there’s an NRL game on Nine, but Gogglebox has ended on Ten, the ABC resembles Showcase from years ago with Wentworth at 9pm. Seven’s 8.30 program is the UK version of First Dates, which bombs here. Sheesh. SBS at least has fresh eps of Great British Train Journeys and Luke Nguyen’s Food Trail. That is a real foodie program by the way, not a spat or a snark in sight.

Why did Fairfax cut Pascoe? … Yanks tune in for Stormy … Sun’s ‘honest mistake’ …