Alan Jones and Mark Latham launched their new book yesterday at an Indian restaurant to the confusion of diners, everyone else.

Alan Jones might be the laziest cookbook author in Australia. Launching his book Conversations in the Kitchen, “co-authored” with Mark Latham, he admitted that out of the 80 recipes featured, he contributed just one — his mother’s sultana scones (although he claimed he submitted 132 recipes for consideration). However, they do seem like special scones. A sample were displayed on a grandmotherly table complete with lace tablecloth and dainty tea set at yesterday’s launch at Manjit’s Indian restaurant on Sydney’s King St Wharf.

The restaurant wasn’t closed for the launch. Next to rows of what looked like wedding reception chairs, regular diners watched on as the men were interviewed for TV (Sunrise and Sky News crews were both present). Jones and Latham were then filmed in the busy kitchen, while staff tried to work around them preparing dishes for customers.

As launch guests waited for the stars of the show to complete their media commitments — delayed by Jones’ late arrival and organised by celebrity publicist Max Markson — waiters handed around canapes including both items off their usual menu, and food from the book. “Mark’s tuna patties” were described by the waiter as “Mark’s FAMOUS tuna patties”. By way of review, they were definitely tuna patties. 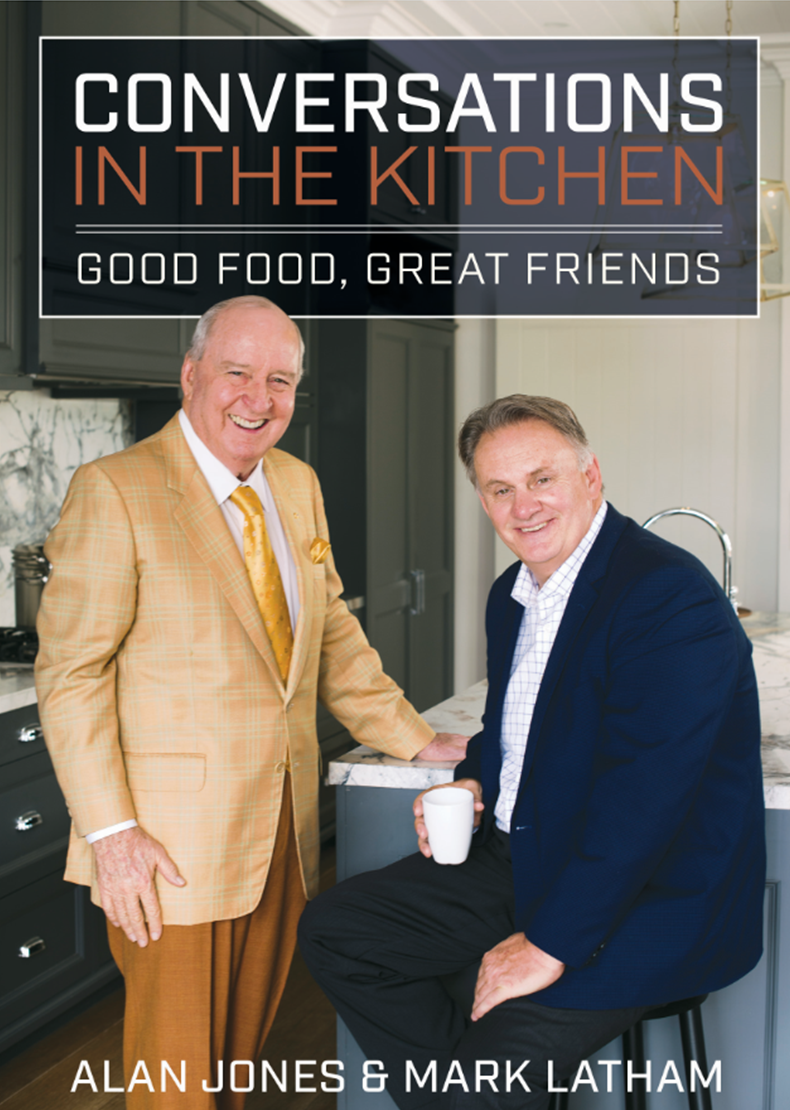 Latham’s former co-host Rowan Dean was there, as was Tziporah Malkah, and Greg Larsen from ABC’s Tonightly. There were whispers that even bigger celebrities were due to attend, but none showed up (it turned out the no-show “celebs” were Married at First Sight‘s Dean and Tracey).

The patties are one of a handful of recipes in the “family favourites” chapter, which also includes shepherd’s pie and a beef stew. Sadly, there is no Latham family recipe for rissoles included — a dish he mocked current Labor leader Bill Shorten for eating last week, when noting the recent release of Chloe Shorten’s cookbook.

“On social media the other day I saw a picture of her serving up rissoles to Bill. Rissoles! Wouldn’t you think the Shortens — they’re the bourgeois left — would do a lot better than rissoles?” he said. “They didn’t look real flash and I guarantee you the recipes in here are a lot better than Chloe Shorten’s rissoles.”

The book came about, Jones said, when his Sky show co-host Graham Richardson fell ill. Jones asked for Latham as his new co-host, but the bosses (perhaps showing some good foresight) thought he was too much of a risk. “I said, I want Mark Latham … they thought he was too controversial and he wouldn’t last, and that’s why the show is called Jones and Co, because they weren’t prepared to put Jones and Latham on the screen. They thought, ‘we may not be here next week’,” Jones said.

And, on that show, they included some cooking and recipe chat — Jones’ idea — in an attempt to humanise Latham, who Jones thought viewers didn’t really know beyond his political career. But when you’re talking about Alan Jones and Mark Latham, it was never going to just be about the cooking, not even in a cookbook.

The book has chapters dedicated to Indian, Italian and “Asian” food — something Jones said was “representative of those culinary changes” as a result of multiculturalism in Australia.

“One of the things this does is it gives a new dimension to the notion of multiculturalism,” Jones said. “People have real concerns about multiculturalism, and Mark does, and I do. The inability to integrate, the failure of people to be able to speak the language of the country they come to, the movement of people to the ghettos where they’re all together. And yet the great benefit of multiculturalism is the culinary revolution that it’s produced in this country and we can share the culinary culture of all these countries that have come here.”

Between recipes, the book includes handy tips (read recipes in full before you start cooking), and “conversations” between the authors include one about what they have in common (“free speech”) and what each likes about the other (Jones likes Latham’s cooking, Latham loves Jones’ work ethic).

The book is Latham’s 12th — an achievement he said on Twitter yesterday was the second-most number of books authored by those who’ve served in Australian Parliament. And, helpfully, Latham noted in his speech, it’s out in time for Mother’s Day. No doubt mothers like Rosie Batty, Lisa Pryor, Gillian Triggs, Claire Harvey and Wendy Harmer will be rushing out to buy it.

11 thoughts on “Inside the bizarre, tuna patty-filled launch of Mark Latham’s new cookbook”