The Commonwealth Games closing ceremony snaffu rolls on, with Seven's Johanna Griggs firing back at ABC's Tracey Holmes' reports yesterday that Seven knew, or should have known, the details of the ceremony before it went to air.

Closing ceremony fallout continues. The fallout from the Commonwealth Games closing ceremony has spilled into another day, with Seven’s Johanna Griggs putting out a statement last night to refute some of the ABC’s Tracey Holmes’ reports yesterday that Seven knew, or should have known, the details of the ceremony before it went to air.

Griggs and her co-presenter Basil Zempilas went on an extraordinary rant at the end of the broadcast, apparently surprised and upset that the athletes hadn’t been shown parading into the venue, or in shots during the ceremony. But Holmes reported yesterday in detail on documents and meetings Seven had been given, detailing the shots that would be available to them.

Griggs followed up with a statement last night, saying that the briefing had not indicated there wouldn’t be any shots of the athletes: “We assumed, like every other closing ceremony ever shown, that the host’s vision would feature athletes non-stop, celebrating, letting their hair down … like we all expect at a closing ceremony.”

The New York Times and The New Yorker share the prize for best public interest journalism for their reporting on sexual abuse of women in Hollywood and other industries and around the world. The Washington Post won the investigative journalism category for its reporting on Senator Roy Moore’s history of sexual harassment of teenage girls, and The Post and The Times were jointly awarded the national reporting prize for their coverage of contact between Russian officials and Donald Trump’s teams.

The winner of the best breaking news photography award, The Daily Progress’s Ryan Kelly won for a picture taken at the Charlottesville white supremacist rally in which a protester was killed — it was his last day at work before he left to run social media for a brewery. Poynter spoke to him about the day the photo was taken.

Seven’s costs bloat. What goes up comes down. Take the shares of Seven West Media. Last Friday they leapt 12.6% to 58 cents as investors hailed the expensive new cricket broadcast rights deal with Foxtel. After a weekend of doing the numbers and removing the fluff from their eyes, down went Seven West shares by 10% and back to 52 cents, which was the closing price last Thursday, the day before the cricket deal emerged.

Why? Investors realised that Seven is taking on more costs at a time when it is in the midst of hacking $125 million from its admittedly high cost base by June 2019. Seven executives ignored the rise in costs in the new contract (for Foxtel as well) which attracted the attention of investment bank, UBS which cut its target price for the network to 60 cents from 70 cents.

This deal adds $82 million a year in costs to Seven’s bloated cost base against the $40 million it was paying for the Australian tennis rights. Nine won the tennis rights with a $60 million a year offer, which, if Seven had gone that far, would still have left it better off than as the junior partner in the cricket with Foxtel. — Glenn Dyer

Front page of the day. The Daily Telegraph has dipped back into its photoshopping ways for today’s front page. 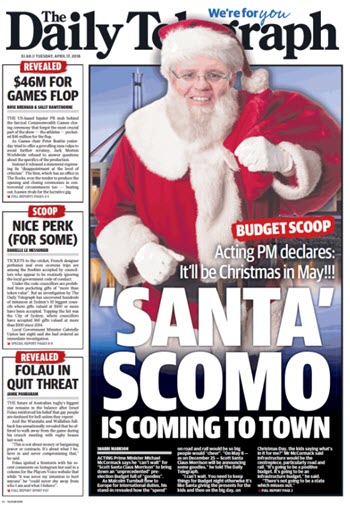 Glenn Dyer’s TV Ratings. Clear air, no games, and Seven’s night as The Voice on Nine (1.32 million nationally) proves to be no real opposition to the reheated bits of My Kitchen Rules (1.8 million nationally). The Good Doctor on Seven ended this season with 1.32 million viewers nationally (the same as The Voice, which failed to crack the million viewer mark in the metros last night with 930,000). The ABC beat Ten into third place — The Bach In Para had 852,000 national viewers.