The Commonwealth Games organisers are in damage control after their host broadcaster NEP failed to show footage of any athletes parading into last night's Closing Ceremony.

Closing ceremony damage control. Seven Network presenters, commentators and athletes have worked themselves into a frenzy overnight over the host broadcaster NEP’s failure to show images of athletes parading into last night’s Closing Ceremony. At the end of the ceremony, Australian rights holder Seven’s hosts Johanna Griggs and Basil Zempilas were at pains to advise viewers that the decision not to show athletes lay, not with Seven, but with NEP. 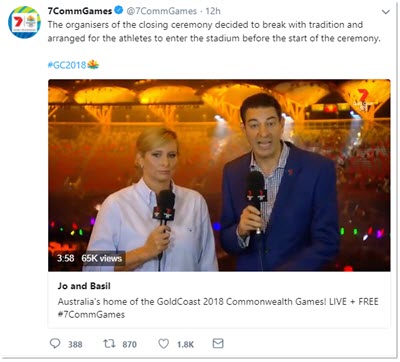 Organising committee chair Peter Beattie has this morning apologised, saying it was a mistake. NEP has also acknowledged the upset on Twitter, referring the decision to exclude the athletes from the live broadcast back to the Gold Coast 2018 Commonwealth Games Corporation.

Rights and media accreditation have been a hot topic throughout these games, with Australia’s two biggest news companies News Corp and Fairfax refusing to apply for media accreditation, citing excessive restrictions. Nine’s accreditation was also  suspended after it “mistakenly” broadcast footage of the Opening Ceremony dress rehearsal.

The Oz’s great readership, according to whom? A headline atop a small story in The Weekend Australian boasted: “Print readership soars — thank you, Australia”. The story said the paper had “maintained its status as the nation’s best-performing major news brand, growing its print readership to 620,000, according to the latest industry date”.

No mention of the source for the numbers, no breakdown between physical sales of print copies, no breakdown of digital impressions for the websites, just bombastic assertions. All very creative and all very opaque. — Glenn Dyer

Daily Fail. Even for Daily Mail Australia — often brutal in its descriptions of its story subjects — a paragraph that got through the subeditors yesterday was a bit over-the-top. At the end of a run-of-the-mill write-up on Bachelor in Paradise cast member Florence Alexandra’s social media post about a cosmetic procedure, reporter April Glover signed off the piece with: “But most people who were educated at a high-school level know these vapid cunts only go on the shows to find mediocre Instagram fame and make a living promoting teeth whiteners and unnecessary cosmetic procedures.” 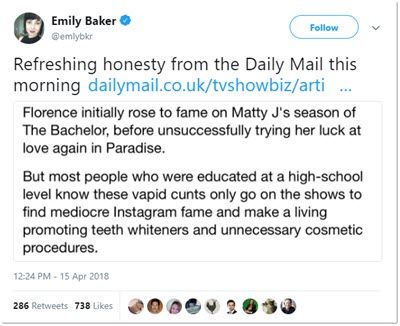 The offending paragraph was left in the story for about two hours before it was removed. The Mail‘s sworn enemy, the Daily Telegraph, wrote up the error on page three of today’s paper, quoting Alexandra as saying she’s consulted her lawyers (and that, with English as her second language, didn’t previously know what “vapid” meant).

In a statement, Daily Mail Australia apologised for the “inappropriate language” in the article, and said the offensive wording was removed when they became aware. It said it would “properly investigate how the offending words were published”.

Ten communications boss departs. Ten’s head corporate spinner Neil Shoebridge is leaving the network to establish his own consultancy. He has been in the role since early 2012, and will finish up towards the end of May. A statement from Ten said he would continue to work with Ten as a consultant. A replacement is yet to be announced.

Glenn Dyer’s TV Ratings. Games over, Games over, normal transmission has been resumed. A total of 1.58 million watched the Glory section and then 1.53 million watched the closing. Averaged across the two programs, a very sold 1.55 million people, which was easily more than any other program last night except for Seven News with 1.99 million and MRK’s  1.88 million.

The Voice — 1.45 million nationally for the launch last night, went head to head with MKR from 7pm and lost out, finishing well behind. 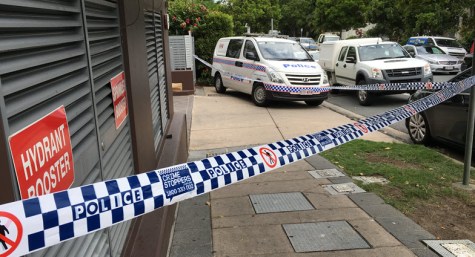 It’s now clear why Peter Beattie got the gig- world champion at apologising for stuff-ups.

Peter Beattie, is the exemplar, the ne plus ultra exponent of making mea culpa a victory speech.
He would give the demagogue in 1984, who turned mid sentence on the hustings from Eurasia being the enemy to it all being a Eastasia plot, a run for his money with that trade mark shit-eating grin and shining empty dome.

Opening ceremony – a volunteer accompanying foreignVIP was asked – What is this all about?
The city – exodus of the 1/3 population – to all points south & North [Sydney , Melbourne ,Tassie, Sunshine Coast] and overseas-the States , Bali – anywhere but Gold Coast.
The residents of Currumbin – imprisoned in their own homes for 3 days – allowed out at 3:00am return by 7:00
Businesses- worst trading in memory – at least Joh budgeted for the expected downturn by Brisbane Expo in the 1988 and compensated small businesses .
Well known economist and paid health gadget commentator – Dawn Fraser – makes expert prediction of a huge financial windfall of visitors. Simple maths show the combined losses of business will never be regained – so just mark up small business suffering!

The workers have lost their Xmas holiday entitlements as they have forced to take their leave for the Games .
Wow! Australia has won a huge amount of medals- competing against teams from second rate countries – One cycling team bought their bicycles from Amart sports store when they arrived.
60% of the private security guards left stuffed up by GOLDDOC – the venues were saved by Police and the experienced military personnel. Any idiot should have left the security arrangements to the Queensland Police Service and the military – QPS have the experience from organising G20 and are the recognised experts within their field.
By the end the finale – 75% [3/4] of the seats in the stadium were empty, only Delhi had long speeches and were shorter than the final Gold Coast speeches – what entertainment? a reunion of TV contestants.
Finally if anyone short lists people with a surname Beattie and Porter for any other jobs give the venue a wide birth – it is sure to be a monumental stuff up!