Is this $1 billion cricket deal all it’s cracked up to be?

After four decades, Nine has lost the broadcast rights to the cricket. But the deal might not be total cause for celebration for new rights holders Foxtel and Seven.

The much talked about deal will see Nine end its 40-year association with the game. Nine was reportedly losing more than $20-30 million a year on the cricket and only making a profit when the Ashes series rolls around (they’ll still be broadcasting the upcoming 2019 series). The network has recently taken up partnership with Tennis Australia, snatching the right from Seven for $60 million a year (against the $40 million Seven was paying). More importantly, the $60 million will be less than the $80 million that Nine was paying Cricket Australia.

The new package with Seven and Foxtel is said to be worth $1 billion, but like the AFL contracts both Seven and Foxtel have, there will be tens of millions of dollars of contra or free advertising for games, clubs and AFL-related services. That’s a benefit that passes to Cricket Australia, but it is a cost for Seven and Foxtel because the contra ads reduce the inventory the two networks can sell to advertisers. Nine has a similar arrangement in its current contract with the NRL.

It is the big sports rights deal that Patrick Delaney has wanted to start his reign as CEO of the newly merged Foxtel/Fox Sports that will be 65% owned by News Corp and 35% owned by Telstra. Foxtel needs a deal like this to try and arrest then build its subscriber base, which has fallen sharply. Foxtel’s costs have been rising, its churn (replacing exiting subscribers) has been costly and the continuing rise of streaming video rivals such as Netflix and Stan (owned by Nine and Fairfax respectively) has drained customers and millions of dollars of subscription revenues away from Foxtel.

News Corp revealed earlier this year that it plans to write-down its investment in Foxtel and Fox Sports by upwards of $1 billion because of the weak outlook for TV in Australia. Perhaps this deal will see it drop that plan or reduce the size of the write-down.

The news of Seven West Media’s involvement will see its shares come under pressure on the ASX too. Because the costs of the cricket deal (or Seven’s share of the rights costs and the production costs) will be much higher than the tennis rights, Seven’s already tough cost-cutting program ($125 million by the end of June 2019) is likely to be intensified. Seven is already facing $25 million more in payments to the AFL this year which previous cost-cutting was supposed to accommodate, but because of its huge debt bill (a net debt figure of $711 million at the end of December 2017), Seven has added to its cost targets and promised investors that it would cut that debt to around $650 million by June this year.

The cricket rights deal, even with Seven paying less than Foxtel, will add millions to the network’s already high costs and could mean staff at the network face even greater pressures on their jobs, wages and conditions. Seven West shares closed at 51.5 cents on Thursday ahead of the announcement expected around 2pm Sydney time on Friday. The shares are down more than 16% this year and more than 27% in the past 12 months because of concerns about the weak outlook, the high debt, the need for cost cuts, and the company’s investment in fading print titles.

Cricket fans will still see the tests and most games on free-to-air TV and the matches that Foxtel will get will be low-rating (probably not involving Australia). Foxtel/Fox Sports already broadcast most of Australia’s offshore tours to places like New Zealand and India; audiences are low compared to those for NRL and AFL games which dominate the most-watched lists every year for the pay TV operator.

With a solid base of cricket fans already there and no sign of any subscription boost when Australian cricket teams tour offshore, its hard to see how this deal will be the big subscription driver Foxtel needs it to be. 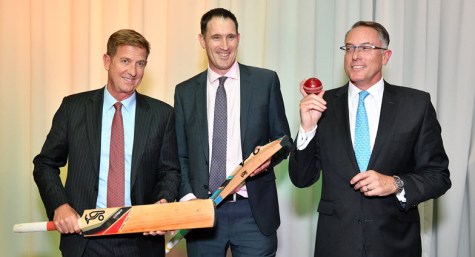 In effect, this is a collusion to circumvent the intent of the anti-siphoning laws, which requires that a pay tv operator “will not acquire the right to televise, on a subscription television broadcasting service, an event that is specified unless a national broadcaster has the right to televise the event on any of its broadcasting services”.
At present ODIs and T20Is played in Asutralia and involving Australia are included on the anti-siphoning list.
If this deal is accepted by whoever the relevant regulator is, it effectively means that every event on the anti-siphoning list can be onsold by any FTA broadcaster for exclusive coverage by a pay tv broadcaster. What would Foxtel be prepared to pay Channel 7 for exclusive coverage of the AFL Grand Final???

One billion from a TV network that allows them to broadcast boring cricket?
No wonder the game is rotten to the core. There will be millions of Australians who are fed up with the game of cricket becoming nothing more than a commercial venture to make money for top management and cheating players.
Like Rugby League, Cricket has now become a boring turn-off. No wonder more people are turning to Optus fetch where you can watch a whole TV series or movies without ad breaks. Or the turn-off from watching multi millionaire cheaters playing cricket, or the grubs, thugs, and drugs of Rugby League.

That should stuff the cricket. Seven is a bloody awful sports broadcaster at Olympic and Commonwealth level. Poor production and dimwit announcers.

The mute button is your friend! As long as Whitelinewireless and ABC grandstand keep covering it, there will be an alternative.

Until Rupert and gang turn up the toes, Cricket on the radio is the only place safe from him (so far). Good thinking, though I will check in on the new lot at Seven to see just how bad it can get. For a laugh or a curse or two as the case may be. Sad

Yes agree. Channel 7 surely would win the most naf award of all the FTAs; their commentary during the c’wealth games has been cringeworthy, and including saturation advertising of putrid shows like “My Kitchen Rules”.
Maybe 9’s worst commentator, Michael Clarke, will migrate, and offer the most fitting climax to this tragedy.

I seriously contest that assessment – none of the Channel 9 lot comes close to Ian Healy for dreadfulness, except when they let KP or Vaughan sneak in! It would be so refreshing if they could actually concentrate on professional broadcasters with knowledge and skills, rather than narcissistic ex-cricketers who could play well, but are dreadful behind a mic.

I don’t think Netflix is owned by Nine. Typo?