Tasting Australia (and Australia itself) has a ‘great male chef’ problem

Adelaide's much venerated Tasting Australia will open with a disproportionately small number of women chefs celebrated. Is this a symptom of a biased industry, or is the festival culpable in sustaining the sausage party?

This Friday sees Adelaide’s Tasting Australia festival opening. The culinary centerpiece of Events SA’s annual program since 1997, the festival plays host to a local and international program with a breadth of food styles and cultural influences. But while the food may be diverse, the festivals choice of culinary “stars” exhibits a significant gender bias. The Australia that crowds will be invited to taste is decidedly male in flavour.

2018 sees a three-man creative team and three male “ambassadors”, with the award winning Cheong Liew as patron across both. They are joined by 37 individual and collective stars. Of these, 27 are individual men, and just three individual women. The remainder is made up one pair of brothers, one pair of sisters, two husband-and-wife teams, and three families.

Over the program, just 7.5% of featured stars are stand-alone women (compared with 75% stand-alone men). If we count all teams with at least one woman involved, the total rises to 22.5% of the total program.

Approached for comment, Events SA noted that “in 2017 there was a focus on women through programming”. That year there were seven individually credited women and 21 men, with women making up 25% of the total program.

There is a loaded and notable distinction in Australian cooking between cooks and chefs. At the 2016 census, 25% of Australian chefs were female, jumping to 54% of cooks. This is a fascinating lens through which to view Tasting Australia’s 2018 program. The festival presents Farida Ayubi, of Parwana Afghan Kitchen, as part the “Ayubi Family”. Similarly, the women behind Adelaide institution Lucia’s are credited as “Lucia’s Family”, and Anant Singh of Jasmin is credited with the “Singh Family.” Cooks are a female-coded role — maternal, homely, and caring — and the family subsumes these women’s identities.

The stories of these women, and this matriarchal familial form of cooking, are important stories to tell. But by regulating these women creators to only these roles, Tasting Australia veers perilously close to the critical misunderstanding brought by telling a single story. Similarly, it excludes male stories of families passing down food culture for a narrative of the typically macho-male chef.

The wider culinary industry’s gender bias has been well documented, perhaps most clearly by Charlotte Druckman, writing for Gastronomica: “Why are there no great women chefs?” Druckman explores the components of an industry that consistently elevates male chefs above their female counterparts: the hierarchical and physically demanding design of kitchens; the disproportionate role of carer women take on; the sexual harassment women face; and an industry and food media which celebrates men far and above their female peers.

It is this last factor in which Tasting Australia’s programming is both a symptom of a biased industry, and also culpable in supporting this bias. They are not alone: the Gourmet Institute have recently released their all-male line-up (with a note from Gourmet’s female editor Sarah Oakes). A report last year found only 18% of special guests invited to feature on MasterChef Australia were female, and in 2017, the “world’s 50 best restaurants” list named just three female head chefs.

While these other institutions should be criticised, there is a particular weight to the gender bias when seen in event run by the state government. And while this may reflect an industry that is male-dominated at a macro-level, at a micro-level it is easy to name accomplished and celebrated women. In particular, The Parabere Forum — an annual international conference centering and supporting women in food — has a database of over 5000 women in the global food industry available to festival programmers, including 50 from Australia.

In a statement provided to Crikey, Events South Australia’s executive director Hitaf Rasheed noted women previously featured in the program, and that this year’s focus is on “culture, generations and families”.

“We are proud of the program we have delivered and we will continue to profile talent which helps tell compelling food and beverage stories — including international and national talent alongside our fabulous established and up-and-coming South Australian talent,” she said.

It is a pity, then, that so few of these compelling food and beverage stories will come from the women. 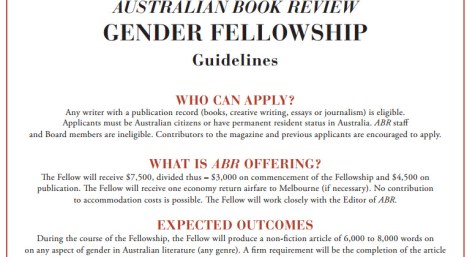 I’ve found it hard to find the right person or forum to leave this comment. Perhaps this one is appropriate. As a frequent visitor to Adelaide from Brisbane, and as a wine lover who likes to BYO, I have found Adelaide’s corkage charges to be uniformly outrageous. Why in Adelaide does a lowly Chinese restaurant, one where the Brisbane corkage charge would be at most $3, feel it has to charge $15 and up. In higher-level Adelaide restaurants it’s even more outrageous. It’s enough to have me dreaming of high conspiracy.

Great article. I get GT and couldn’t believe the all-male line-up. As it’s well-known that women usually have control of the household’s discretionary spending, this sort of programming seems so outdated.