Overnight, the president tweeted that Russia should "get ready" for "nice new 'smart'" missiles. Just what stands between Trump and all out war?

US President Donald Trump blithely tweeted about war again overnight. “Russia vows to shoot down any and all missiles fired at Syria,” he posted. “Get ready Russia, because they will be coming, nice and new and ‘smart!’ You shouldn’t be partners with a Gas Killing Animal who kills his people and enjoys it!”

It was vintage Trump: barely coherent tough guy talk, charmingly unencumbered by traditional notions of what inverted commas are for and which Words Should be Capitalised. 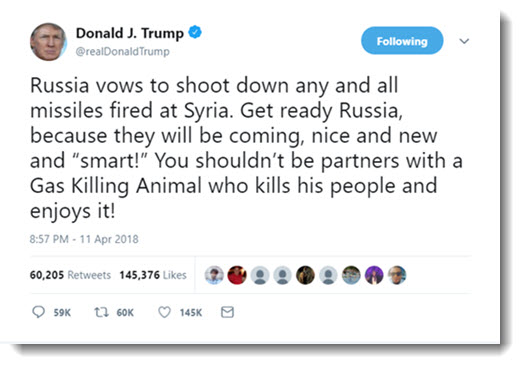 So how worried should we be? What’s to stop the famously impetuous and thin skinned Commander in Chief dragging us all into World War Three? What power does the U.S. Congress have to prevent such all out conflict?

Clinton Fernandes, professor of international and political studies at the University of New South Wales says the US has a system of checks and balances that came about in the wake of a particularly egregious presidential overreach.

“In 1973 the Congress brought in the War Powers Resolution — note they called it a resolution, not an act, because they wanted the president to have some leeway — specifically in the wake of the secret bombing campaign in Cambodia and Laos, which Nixon and Kissinger did without consulting Congress,” he said.

The resolution limits the US military action without the authorisation of Congress, unless it is in response to an attack on the US or it’s troops, or the “imminent threat” of one.

“The argument for self defence and imminent threats can be pretty broad,” Fernandes said. Last year’s attack of the Shayrat Airbase, for example, was undertaken without congressional approval (although members of Congress were informed) but due to it’s limited nature, and the presence of US forces in the area, Ferandes argues it didn’t breach the War Powers Resolution. Bill Clinton’s adventures in the Sudan employed a similar defence.

It’s also noteworthy that the War Powers Resolution has never been tested in court.

“US Presidents have simply asserted their limited self defence and related powers. Obama in seeking congressional authorisation for a Syria strike he ultimately never ordered, said, ‘I have the authority to carry out this military action without specific congressional authorisation.’ His White House counsel argued he could do it due to ‘important national interests of stabilizing the region and enforcing international norms on chemical weapons use’.” Fernandes said.

“Trump’s legal counsel appears to have studied the Obama team closely. In his remarks on the night of the strike, Trump used language his top aides have echoed since: ‘It is in this vital national security interest of the United States to prevent and deter the spread and use of deadly chemical weapons’.”

If Trump was to enter into a war without congressional authorisation, he could face impeachment, which, as Crikey has examined before, is a political process rather than a legal one, requiring both Republican-controlled houses to turn on a man they’ve been happy to accommodate so far.

And of course, “limited attacks” in the name of self-defence can still spark off a major conflict, leaving Congress feeling they had no choice but to approve further war.

“Once in, Congress finds its hands tied.”

Looking forward to the Trumpster declaring WW number 3 by tweet.

This well may happen.

All one need to do is to look at the faces of the men in the top picture to know things around the world are in a really bad state of affairs.

As Caesar did not say, “give me fat & bloated men, so bound up with delusions of adequacy, for they will always be prey to lean & hungry types” – cop the faces of those late middle aged men, it’s obvious that they’ve never know joy or pleasure in their cramped, constipated lives.
And they don’t see why anybody else should not have to endure the same.

What will happen if the Ruskis do shoot down all the missiles?
That would mean that the Ruskis have better weapons than the Sepos. Following on from that the land of the free and home of the brainless would go into full on panic mode. And from there where?
Remember glasnost when the Ruskis declassified some of their weapons that the Sepos and the rest of the world didn’t know about. Those 600MPH rocket torpedoes
and missile systems that shook everyone to the core?

Well!
He did and they didn’t.
So eat drink and be merry we live to panic another day.

While this is true in theory, I’d respectfully suggest that in practice congressional checks and balances offer cold comfort. The war on Libya, for instance, was waged on false pretexts without congressional approval in 2011, as were further strikes in 2016. Now the country is a failed state, 1.3 million people are in need of urgent humanitarian assistance, African refugees are being sold in open slave markets, and nearly one third of the population has fled country.

One thing that differentiates the current situation in Syria from that of Libya is that, with Russia on its side, Syria can fight back. On my assessment, this is what protects the Syrian people from US attack, not the War Powers Act or Congress. As far as impeachment is concerned, Trump has been threatened with impeachment for seeking détente, not for threatening war or bombing Syria, which attracts bipartisan support.