Anne Edmonds’ comedy is truly, madly, deeply Australian – and that’s why it works

For comedy to work, here in this country, it must be truly Australian. It must evoke the minutiae of a time and place, be unashamedly local.

My father has physical need for uncontrolled laughter. This may be genetic, as I suffer the compulsion, too. Neither of us is especially funny, but we have long been especially committed to seek the funny out. It was Dad — a man who claims to have acquired a hernia during a 1972 screening of The Adventures of Barry McKenzie — who urged me to become a newspaper comedy critic about twenty years ago. “It’ll be good for your career,” he said, “It’s prestigious.”

There is, as you know, nothing prestigious about this low form of review. Nothing lucrative, either. Dad, who had always hoped I would become a union lawyer, was really just in it for the free tickets.

He’s nearly eighty, now. Still, most years, he drives down the Hume from Canberra to the Melbourne International Comedy Festival in the hope that we’ll see one or two shows, with our complimentary passes, that will make us lose all our shit.

Fortuitously, we have similar taste. Dad has approved many of my four- and five-star awards and holds Nazeem Hussain, the Kransky Sisters, Denise Scott, the opera Keating! and Eddie Perfect among his favourites. But, he never laughed so much as he did in 2015 when comic performer and writer Anne Edmonds enumerated all the foods she ate to overcome a hangover before boarding a light aircraft in the show You Know What I’m Like.

My memory of the routine is not good, and this is due entirely to Dad who seemed to be retching as Edmonds described every awful bit of deep-fried rot she’d crammed into her face. At one point, he looked at me and said, “CHIKO ROLL! WHO TALKS ABOUT A CHIKO ROLL!”. He resumed dry-heaving and then, as Edmonds recalled a gastrointestinal distress suffered in a small lavatory, he fell off his chair.

“I’m not that fucken funny, Grandpa,” she said to Dad, now climbing back onto his chair. He began to laugh-cry, wiped his eyes then announced to the small room, “That girl’s a true Australian!”. He fell off his chair once again.

I’ve been reviewing comedy and considering its criticism for decades. Still, I’ve never been satisfied with any theory of the form. This is due, in part, to comedy’s very physical nature — its truest criticism is a laugh. The individual critic, however, can determine those comic techniques most likely to produce that physical reaction. When Dad pronounced Anne a “true Australian”, it clicked for me. Truly Australian work is truly funny to me.

Eddie Perfect sings so often of flat Australian suburbs and the franchises within them. The Kransky Sisters perform a white Queensland spinster gone sour in the sun. Hussain is often misunderstood as a “big picture” comedian, probably because he is Muslim and brown. But, really listen to his stuff and find that it is rich with details of a life lived in this territory. There’s meals and tiffs and Uber rides and all the micro stuff that connects a comic and their audience to a place and a life.

Among the comedians in receipt of the annual Dad and Helen award, there are none who proselytise. Minutiae, hints of the Australia we know, or one we may not fully know — these are the things that work. And, the comedian prepared to show themselves a little nakedly. That works. It’s very Australian, says Dad. It’s very Australian to find yourself at least a bit distasteful.

“My interest is in showing deep humiliation,” Anne Edmonds told me yesterday. “I mean, otherwise, what’s the point?”

“If I’m not prepared to reveal my own horror or sadness, I’d rather not bother. And if I can’t use the details that affectionately describe that horror or sadness, like, say, a US country music artist does ” — for Edmonds, these details may include discount clothing outlets, airport food, low income suburbs — “I’m not funny.”

“I get something into my head and I decide it will be funny and then I have to do it. There’s nothing, no sense of mortification or whatever, that will stop me. And I guess that’s why I breastfed a man on stage.”

I’m still a comedy reviewer every so often, so remain bound to offer no spoilers. But, let’s say that Edmonds goes well beyond breastfeeding in the vulgar, exquisite and very Australian work Helen Bidou: Enter the Spinnaker Lounge. This white midlife woman whose identity is divulged through details, self-loathing, aspiration and naked horror would probably give Dad another hernia.

Fortunately, his annual colonoscopy could not be rescheduled for this performance. If yours can, and you can find a ticket, go see it. Like Hussain, Perfect and all the others beloved by me and dad, she’s a true Australian. 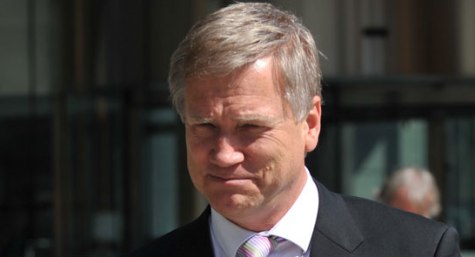 Bolt uptight: when did the right lose its sense of humour?

OK. Talked me into it.

I love comedy and I think that I’d like your Dad too.

Cripes Helen, you’re a bottler! I wish I could see Anne Edmonds’ show but your piece is a worthy substitute. The Adventures of Barry McKenzie is the perfect example of Australian humour and those who worked on it, and I’m one of them, will swell with pride at the news of your Dad’s hernia. Barry Humphries knows exactly how to enunciate our anxieties and desires. I offer one gorgeous example: “I’d crawl half a mile over broken glass just to hear that little sheila piss into an empty jam tin.” True love.

I haven’t see her standup but her segments on The Katering Show have had me in stitches! Hope she comes down to Tassie some day soon!