Some sibling rivalry erupted between News Corp stablemates over an "exclusive" story, and other media tidbits of the day.

Exclusive watch. There was a bit of News Corp Adelaide competition playing out on Twitter yesterday in claiming credit for breaking a yarn about a costs blowout on the new Royal Adelaide Hospital. At 4.33pm, The Advertiser’s official Twitter account tweeted its “EXCLUSIVE”: 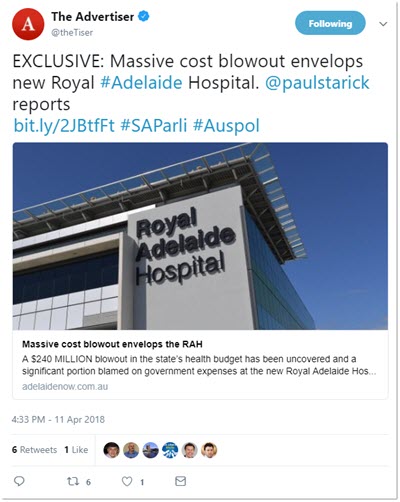 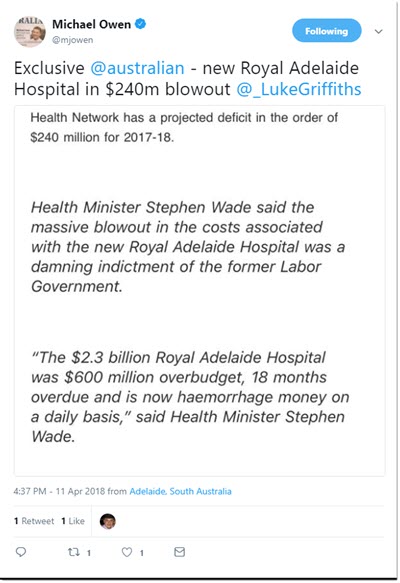 To the dark side. Sky News anchor Jim Middleton, who previously worked at the ABC for more than 40 years, has taken an advisory job with SA Senator Tim Storer. Storer is an independent who was previously with the Nick Xenophon Team, and replaced NXT Senator Skye Kakoschke-Moore who resigned last year after being caught in the citizenship scandal.

Russian journos sneak into double agent’s hospital. Two Russian journalists had to be asked by police to leave a UK hospital where a former double agent is being treated for exposure to a toxic nerve agent. Sergei Skripal is in Salisbury Hospital where two Russian TV journalists snuck in during the night to film a story. The hospital and the UK’s National Union of Journalists have condemned their actions, saying patients have a right to privacy.

Raids over European sports rights. Two of the world’s major media companies and a huge telecommunications group have been drawn into the aggressive EU investigation of possible sports rights fixing. Dutch group Vodafone Ziggo was raided after Fox’s London headquarters were subject to the same yesterday as part of the investigation.

Vodafone Ziggo is owned by Vodafone and the US cable giant Liberty Global, which is controlled by John Malone. Malone is a reclusive cable magnate who controls a media empire encompassing basketball, travel, TV and film production, cable TV, internet, broadband and satellite broadcasting.

Ziggo’s cable arm owns the Dutch rights to the UK Premier League, Spain’s La Liga and the UEFA Champions League. It is Fox’s main competitor in sports broadcasting in the Netherlands. 21st Century Fox, the owner of Fox Networks owns a controlling stake in Eredivisie Media and Marketing (EMM), which owns the Dutch Premier League (known as the Eredivisie) media and sponsorship rights. — Glenn Dyer

A new boss for CBS. So will the Ten Network get a new boss? Ten’s new owner, CBS chairman and CEO Les Moonves could be resigning, according to US media reports. Moonves could be out at the US network if Shari Redstone, major shareholder in CBS and its stablemate, Viacom, is unhappy at the lack of progress in merger talks. The Redstone family’s National Amusements controls more than 80% of each company, and for the past month or more has been trying to get them to engage and merge. A similar attempt in 2016 failed.

To pacify Redstone, CBS last week launched a low-priced all-share offer for Viacom valued at around US$12 billion, which Viacom rejected, demanding one of higher value. Moonves and CBS has baulked at that. The big problem for both companies is that non-Redstone shareholders might sue the companies if they feel too much is being paid (by CBS) or the company is being sold too cheaply. It seems unlikely that Moonves would go, but US analysts are not discounting it. — Glenn Dyer

Video of the day. BBC reporter Mike Bushell found himself in a spot of predictable bother when interviewing the English Commonwealth Games swimmers in a pool. 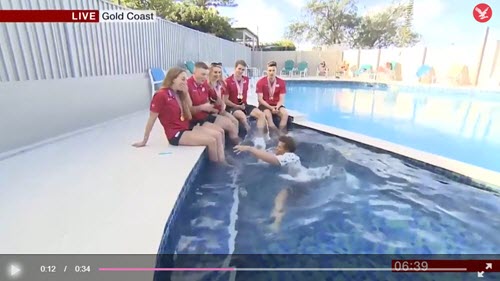 Re ruskies seeking out Skripal – “the UK’s National Union of Journalists have condemned their actions, saying patients have a right to privacy”.
True but could there be an element of embarrassment that the entire UK journo. mob have been played like a cheap fiddle throughout this whole farrago?
Rather than doing… what was it once called, investigative work?

The Advertiser tweet includes their exclusive spelling of “envelops”.