Conservatives have found a new reason to yell at Yassmin Abdel-Magied. Plus, other media stories from the day.

Good feud guide. It took barely a few hours for conservatives’ favourite punching bag Yassmin Abdel-Magied’s new ABC program to raise the ire of The Australian, Andrew Bolt on his blog and senators Eric Abetz and Cory Bernardi. The program Hijabistas, to be aired on the ABC’s streaming platform iView, is about Australia’s hijabi fashion scene. 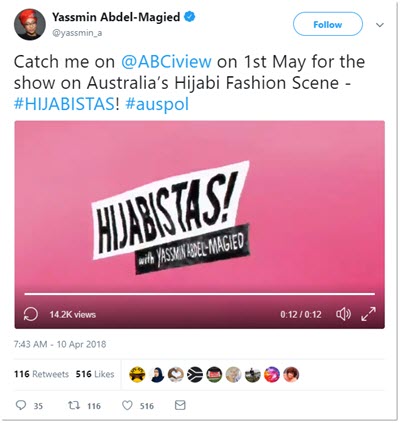 Magied shared a promo for the show on her Twitter account yesterday morning, and by the evening, The Oz was on the case, as was Andrew Bolt, and Abetz was ready to quiz the ABC’s managing director Michelle Guthrie about the show at Senate Estimates this morning.

Abdel-Magied has previously written about the attacks she has endured from the Australian conservative media, which contributed to her decision to move overseas.

Marie Colvin targeted. Court documents newly filed by war correspondent Marie Colvin’s family in a civil lawsuit demonstrate that she was tracked and assassinated by the Syrian regime, her family claims. The US federal lawsuit is against the Syrian government, suing over Colvin’s death as she covered the war as a US citizen.

As The Intercept reports, Colvin’s final report for the Sunday Times of London was focussed on the human toll of the war. The court filings claim that Colvin’s Skype interviews to TV networks from Syria betrayed her location, leading to her being targeted in a rocket attack.

Fox offices raided. Fox’s London offices have been raided by investigators from the EU’s competition watchdog looking at possible competition law breaches in the area of sporting distribution rights. The investigators seized documents and computer records. Other, so far unnamed, companies were also raided in a coordinated operation.

The EU later confirmed the raid saying it was part of an antitrust probe regarding sports rights. It said it had “concerns that the companies involved may have violated EU antitrust rules that prohibit cartels and restrictive business practices”. The officers raided the London headquarters of Fox Networks, which distributes TV and cable channels and content around the world (this includes content from Fox Sports channels owned or controlled by Fox in the US, Europe and Australia). — Glenn Dyer

ITV circles Endemol Shine. In a deal that will turn global TV production on its head, the UK’s ITV television network and production company (the world’s largest independent) is rumoured to be looking at buying Endemol Shine, half-owned by the Murdochs’ 21st Century Fox. Deadline reports that ITV has started exploring a deal as the other half-owner in Endemol Shine, the US hedge fund and private equity group, Apollo Global Management, looks to sell its stake.

It all depends if Disney wants to retain the Fox stake in Endemol Shine in the US$66 billion carve-up of the Murdoch family’s key content company. Other reports say Apollo has already talked to Disney about combining their stakes in Endemol Shine and putting them on the market at the same time — a move that would guarantee a sale, rather than each partner selling their stakes separately once the Fox-Disney deal has settled. Buying Endemol Shine would cost ITV more than Talpa Media (producer of The Voice), its previous largest deal, which cost it an initial cash consideration of half a billion euros (more than AU$820 million).

ITV is known to be looking at expanding its TV production business. Endemol Shine produces Masterchef in various markets, All Together Now (which is about to start on Seven here) while ITV owns The Voice, Broadchurch, Vera, DCI Banks. In Australia it produces Shane Micallef’s Mad As Hell and The Doctor Blake Mysteries — both for the ABC. — Glenn Dyer

Ten is hanging in nicely given the strength of the opposition on Seven, thanks to the Bachelor in Paradise with 874,000. The show does not depict paradise — far from it, it is a living hell for everyone. But it is not sport, and it is not the contrived prequel antics of Young Sheldon on Nine (1.04 million).