The media near unanimously showed the face of a man climbing the Sydney Harbour Bridge this morning. Plus, other media tidbits from the day.

To blur or not to blur? The Sydney media was almost unanimous in its decision this morning to clearly show the face of a man who’d illegally climbed the Sydney Harbour Bridge in the early hours, causing huge traffic delays across the city all morning. No motive or reason has yet been identified for the man climbing the bridge, but police negotiators were working with him for several hours, trying to get him down.

The breakfast TV programs Sunrise and Today both ran footage throughout their programming, zooming in on the man’s face. And Seven was running live footage on Twitter of the man as he was arrested and handed over to paramedics, and strapped onto an ambulance stretcher.

Online, all the major news websites had early images of the man’s face, including on the homepages of The Daily Telegraph and Sydney Morning Herald. The ABC was, for a while, running a screenshot of a Nine close-up of the man’s face, but this was blurred a little later in the morning. 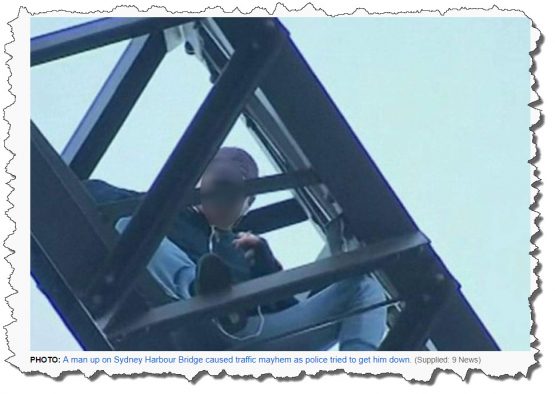 The only outlet that responded by deadline to Crikey‘s questions about why the man’s face wasn’t blurred in case there were mental health issues involved, was the Tele‘s editor Chris Dore, who pointed out that every other outlet had also published the image “unadulterated, as they should”.

“We don’t make assumptions about what motivates people to act out in public when covering an event that shuts down the city,” Dore said. “If we were to assume mental illness in the coverage of every news story we would become The Daily Pixelate.”

Tracking shooting fake news. News of the shooting at YouTube headquarters in San Bruno, California this morning prompted the now-familiar cycle of fake news, hoaxes and misinformation pumped out on social media sites. Within hours, social media posts had (incorrectly) named various people as suspects, and a writer for right-wing website The Gateway Pundit had suggested the shooter was a woman wearing a headscarf. BuzzFeed is collating the false reports it’s finding online here.

The revolving door. Mark Llewellyn has returned to Nine, following his departure from Seven last month. Llewellyn will take on the role of creative director of news and current affairs at Nine, where he previously worked as news director, which ended in a high-profile unfair dismissal suit. Llewellyn was founding executive producer of Seven’s Sunday Night, but was moved to a different role after a fight with another producer. He produced the ill-fated Murder Uncovered for the network, and he left last month when his contract wasn’t renewed.

Sunrise segment investigated. The Australian Communications and Media Authority has independently opened an investigation into a Sunrise segment about Aboriginal child welfare that included commentator Prue MacSween suggesting that “we need to do it again, perhaps”, referring to the Stolen Generations.

The broadcast regulator has received a number of complaints, but a spokesperson said the investigation was opened as an “own motion investigation”, without reference to any complaints that had been made. NSW Greens MP David Shoebridge was one of those to have made a complaint, Guardian Australia reported last week.

“In this instance, the ACMA made the decision to open an own motion investigation into the licensee’s compliance with the Commercial Television industry Code of Practice. That investigation is at an early stage but will follow the normal course, including an assessment of submissions from the licensee,” a spokesperson said.

Anna Wintour out at Conde Nast? Anna Wintour, the famed editor-in-chief of Vogue and current artistic director of its parent company Conde Nast could be on her way out according to rumours circling the US publishing industry. Page Six reports that Wintour will be leaving after her daughter’s wedding in July, a claim that Conde Nast has strongly denied. But Page Six is confident, reporting that Vogue UK’s editor, Edward Enninful, is likely to be the replacement US Vogue editor, while it’s not clear who would step in as Conde Nast artistic director.

Glenn Dyer’s TV Ratings. Nine’s night with Young Sheldon (1.31 million nationally and down 100,000 from Monday night), the fresh episode of The Big Bang Theory (1.20 million and also sliding) and a repeat of Big Bang at 8.30pm (1.04 million). Young Sheldon was tops nationally in the metros and regions when it started last week. Last night it was third nationally, fourth in the metros and third in the regions, with the audiences at series lows. It is a one-off hit and will fade.