Greens purge to commence tonight? ... arguments in mediation ... the interesting résumé of the new ACMA CEO ...

ACMA new chair. So a few eyebrows arched at the announcement that Creina Chapman had been appointed CEO and deputy chair of the Australian Communications and Media Authority. That Chapman, of famously anti-media-regulation News Corp?

It’s worth remembering that the Oz didn’t launch into full attack mode until 2014 — also the year that then-editor-in-chief Chris Mitchell threatened Media Watch host Paul Barry with an ACMA referral — after Chapman had moved on, to Tony Abbott’s office. Which, incidentally, she had left before Abbott criticised ACMA for not going harder against the ABC:

He also sympathised with broadcaster Ray Hadley, when he complained that ‘right-leaning’ shock jocks such as himself were regularly referred to the Australian Communications and Media Authority, while the ‘left-leaning’ ABC was ‘left to their own devices’.

‘I can understand your frustration, Ray, because at times there does appear to be a double standard in large swathes of our national life,’ the Prime Minister said.

Despite the pedigree of her employers, we’ll give her the benefit of the doubt for now.

Spitting the dummy? What is going on with Victoria’s Accident Compensation Conciliation Service? We hear there’s a great deal of unhappiness at the Spring Street offices of the ACCS — which acts as mediators, guarding injured workers’ rights and reducing costs in the Victorian workers compensation scheme. Much of it is about the the way things are headed under their current leadership.

A tipster tells us the 2017 staff satisfaction survey was cancelled because mediators aren’t within its scope. Meanwhile costs have ballooned and resolution rates have noticeably dropped, a fact backed up by a look at the ACCS annual reports. Similarly, the number of workers and employers rating the service they receive as “good” or “very good” has steadily dropped over the last few years. Know more? Send us a tip.

Getting Sirius. Reality is settling in as fences and a “for sale” sign have finally gone up on Sydney’s Sirius building. The brutalist social housing building has technically been for sale since the end of last year but the sale has been vigorously fought by locals and activists. Last month, its last tenant, the 91-year-old Myra Demetriou was named Sydney’s Woman of the Year. Ms Tips understands that security is high around the building with six guards in place at the time this photo was taken (with thanks to Tim Ritchie for the update). 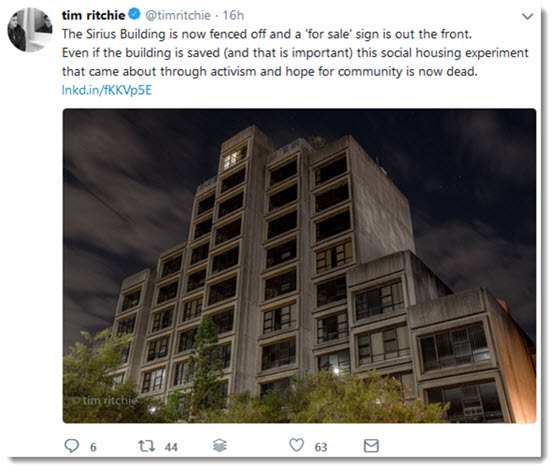 Throwing them in the Dare-bin? We hear the Greens Darebin branch — which gave us all such joy during the Batman election as it attempted to not so much shoot itself in the foot, but amputate its legs with a bazooka — is tonight having its first meeting since the Alex Bhathal failed to dislodge Labor from the seat. Are we going to see the purge Richard Di Natale promised us? Are expulsion motions imminent? Will the leaker to the mainstream media be reprimanded? Know more? Give us a yell.

Not sure if serious.

Whatever you call the Oz during the Rudd-Gillard years, it was in rabid attack mode filled with baseless propaganda. It may have got even worse since, that doesn’t mean it was at all reasonable before 2014.

“after Chapman had moved on, to Tony Abbott’s office”

Not a ringing endorsement.