Aussies get sledged ... Minister gets shirty ... the search for happy NBN users ...

Minister gets shirty. Normally Easter shows are places for showbags, carny folk-operated rides, exasperated parents, snacks to drive public health lobbyists wild and those log-chopping contests where the primary interest is whether someone will lose a foot.

But for some reason, one NSW government department has a stand at the Sydney Easter Show, personned by public servants clad in carefully selected clobber to pitch the department’s message. Only problem was, the relevant minister showed up to the stand, took one look at the shirts and immediately took exception to the slogan on the back: “Be part of our plan”.

We’re with the minister — that sounds more like a line from a Bond villain (“Come come, Mr Bond, you get as much fulfillment from planning as I do.” “I admit, planning you WOULD be a pleasure.”) than an appropriate bureaucratic slogan.

In demonstration of the flexibility and agility of NSW public servants, they then turned their t-shirts inside out for the rest of the day, before someone was dispatched to Lowes for some replacement plain shirts.

Cricket and brands. The ball-tampering scandal has been a gift that just keeps on giving; for columnists who need a topic, for rival teams who want to give their bitterest opponents a good kicking, and for politicians who wish to be seen to take a stand while saying nothing even slightly controversial.

It’s also been a major David Boon for brands who want to have a bit of a knockabout fun at Australia’s expense in a way that might potentially go viral. Here’s a little rundown of our faves: 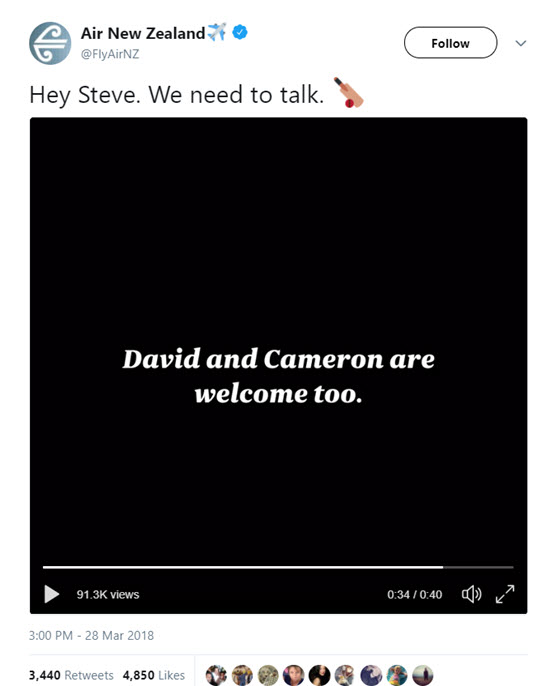 Still with our Tasman neighbours, Mitre 10 in Christchurch is now offering sandpaper with all its backyard cricket sets: 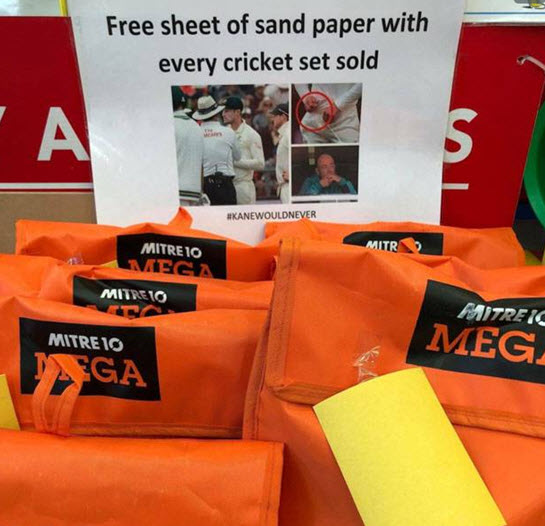 Look, fair cop, but Ms Tips won’t be forgetting this if it turns out anything untoward aided New Zealand in their recent thrashing of England.

Back home, Koko events is offering a special for anyone using the code SANDPAPER when purchsing its Backyard BBQ/Cricket packs. They, of course, also come with sandpaper. A swinging good deal, they assure us.

Who would work for this guy? Which federal MP has seen an exodus of staff for their quick temper and verbal abuse, even going so far as to rip a clock off the wall in his Parliament House office? Know more? Tell us on the tip line.

NBN experiences. One of the government’s ongoing PR failures is the roll-out of its NBN service — just this week in question time, Prime Minister Malcolm Turnbull faced questions about the “over-budget and under-performing” Hybrid Fibre Coax roll-out. So what better way to flip the narrative than to showcase all those people who regularly get in contact to express their delight at how well their NBN is working?

Except, it would appear they haven’t got those handy.

The post has since been removed, but if they’re still on the look-out, Ms Tips can think of one fairly high profile NBN user who’d be happier than most with their internet speeds?

Government noobs? In further government internet use news, Innovation Aus reports that the Australian government has signed up to a service that monitors their email addresses for breaches and notifies users in real-time if one occurs.

Not a terrible idea in itself, obviously, but Ms Tips couldn’t help but be amused by the name: Have I Been Pwned? To save you the search, pwned (pronounced pohned) is video game speak for being savagely beaten; how long before this trips up a minister in question time or during a presser?

turnbull inherited a rolls royce NBN then put a mini minor motor in it and wonders why it uses so much fuel and is so slow , go back to merchant banking trumble, the caymans need your special talents.