Indi band. Are the Nationals testing the waters for Wodonga’s mayor, Anna Speedie, to run in Indi? Earlier this week, after funds were announced for an investment in local rail, there was an ad in the local paper featuring Speedie with Nationals Leader Michael McCormack and his deputy Senator Bridget McKenzie. Naturally, eyebrows were raised.

Letters to the editor were penned by curious locals, and questions about the relationship were raised in an ABC Goulburn Murray interview with the pair. A large article in the Border Mail (“Mayor’s OK with being in Nats ad”) dismissed speculation that Speedie was running in the upcoming Victorian state election, but is the wording of the response — “Asked if she had future plans to stand for higher office, Cr Speedie was unequivocal when it came to the Victorian election” — perhaps suggestive?

Amazon new venture. As Amazon battles to bed down its Australian entry, it has shown its hand in France by teaming up with a major supermarkets group to do its food delivery. Rather then go it alone — as it has done in some US markets, Germany and the UK through Amazon Fresh — the online giant has done a deal with Casino Group, one of France’s major supermarkets chain.

So, the question becomes, who will Amazon select in Australia to partner with — Coles or Woolies?

MacTiernan gets raw. Former minister for infrastructure, and longtime Western Australia Labor stalwart Alanah MacTiernan seems to have been taking a page or two from the Tony Abbott (recipe) book. A story about her ruling out running for the seat of Albany (on the cover local paper the Albany Advertiser) is somewhat overshadowed by the accompanying image of her taking a massive chomp out of a raw, unpeeled potato. 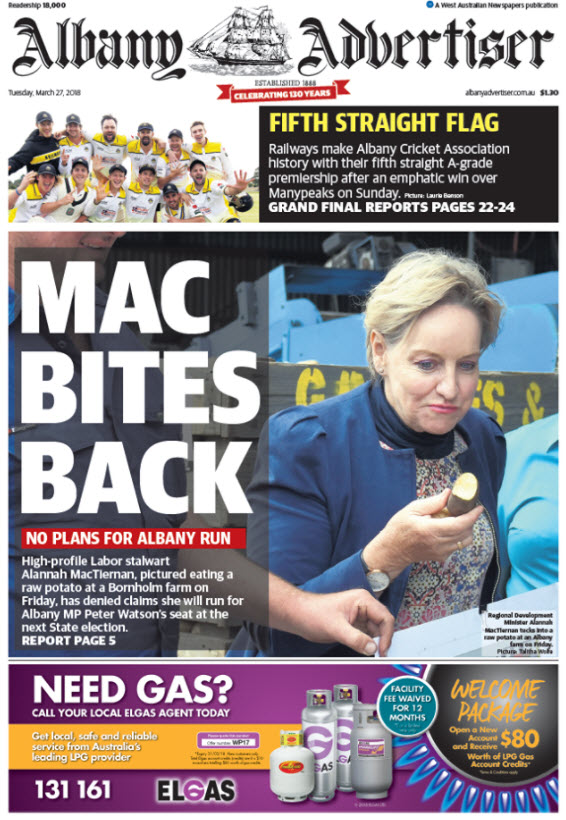 Worse than Abbott’s onion in 2015? The question is causing a great deal of controversy in the Crikey bunker.

Knox’s poor form. Earlier in the week the take-storm that was the media’s response to the ball-tampering controversy had one particularly bright lightning bolt — Fairfax columnist Malcolm Knox’s assertion that this was cricket’s #Metoo moment. The piece attracted its own little flurry of condemnation on account of what many saw as a dubious tone-deaf reading of the situation.

We all have secrets, don’t we? She that is without sin, let her cast the first stone? Jah rule, mon. Come in close and I’ll tell you mine.

Brethren, I couldn’t understand what you were saying.

I didn’t take offence when you were charming ole sparkly eyes, because me didn’t have the foggiest idea what was comin’ out you mouth. Is you even speaking English? Me rasta brethren too – me spend seven days and six nights on a Qantas Holiday at Negril one time – so me jive talk better than any white man, cha! But the Universe Boss go too fast even for the I. So no offence taken!

Alannah and a raw potato.
That’ a snap that’s right in so many ways.