Senior executives at Domain will be leaving the recently-floated company in a restructure. Plus, other media news from the day.

Domain shakeup. Senior executives at Domain will be leaving the recently-floated company in a restructure. In an email to staff yesterday, executive chairman Nick Falloon said the restructure was “entirely distinct form the ongoing workplace review”, which was implemented after CEO Antony Catalano suddenly resigned in January and a complaint of a “boy’s club culture” at Domain was revealed.

ABC reporter’s “court showdown”. ABC journalist Louise Milligan has had the cameras and headlines turned on her, following her appearance as a witness in the Melbourne trial of Cardinal George Pell in Melbourne yesterday. Milligan’s book Cardinal included allegations against Pell, as did a 7.30 report she compiled for the ABC.

The New Daily reported that Milligan and Pell’s barrister Robert Richter clashed as he questioned her in “often heated exchanges” that included suggestion she had distorted information so as to “poison the public’s mind” — a claim Milligan rejected.

Seven sells Yahoo7. Seven West Media has sold its stake in website Yahoo7 to Oath, which was also a majority shareholder. In a statement, Seven said it was “now focused on strategic development of Seven’s market-leading news and public affairs brands”, saying the move was the “natural next step of the strategy”.

The sale follows a bizarre press release last month, which managed to say not much at all, other than indicate there might be some redundancies. The Guardian reported after that press release that two-thirds of Yahoo7’s almost-200 staff would be made redundant. 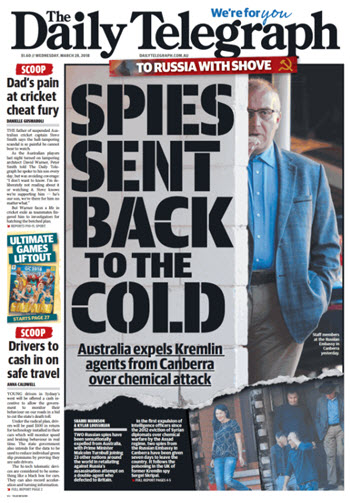 Television ad recession. The US TV industry has entered what one leading forecaster calls a permanent ad recession. After six successive quarters of falling spending in the midst of a solid recovery to the end of 2017 in the US economy, the huge US market is heading into years of falling revenues — with flat growth at best in election years and falling growth in the rest. According to US marketing research group Magna, the US TV sector (the biggest in the world) will experience a permanent recession from now on.

For TV groups like CBS and Fox (which already get more than half their revenues from retransmission, affiliate and other fees) the forecast won’t be too bad. NBC, which is owned by Comcast and cable networks (many of which get retransmission fees from cable carriers like Comcast, Time Warner and Charter will feel the pain because the forecast fall in revenue will come on top of falling subscriptions.

The US cable industry had its worst year in 2017 with 3.7% of subscribers ending their deals with the cable companies. While many switched to broadband services from the same company (such as Comcast), that was to concentrate on the cheaper streaming video services.

Magna’s new ad spend outlook for the US calls for digital to grab the majority of US ad spending some time this year. But while total spend will now be up 5.5% this year to US$197 billion from December’s 5% rise, Magna says the story is the erosion of TV’s share of ad spending.  — Glenn Dyer

Glenn Dyer’s TV Ratings. Young Sheldon (1.41 million nationally) and The Big Bang Theory (1.17 million nationally) might have done it for Nine for a second night in a row but you have to ask how long the joy will last for the network. Young Sheldon’s audience fall more than 10% from Tuesday night’s debut of 1.57 million, while there was a 20% slide in the audience for The Big Bang Theory from Tuesday night’s 1.48 million.  But at least Nine ran a couple of programs of interest. The other networks had zilch on last night, and that includes the worthies the ABC and SBS. Ten at least ended up third ahead of the ABC.

And tonight it is even worse as Nine and Seven fragment their offerings to accommodate the AFL Footy Show and The Front Bar in AFL markets. The rest of the country (NRL markets) will have to make do with low grade movies. Ten has nothing — repeats of Bondi Rescue at 7.30pm says it all. The ABC has Hard Quiz and Mad as Hell.

Just what is in this deal for Nine?

Oh dear Crikey. Here I was quietly admiring you for staying out of the “Skripal poisoning” beat-up, but then you go and run the front page of that trashiest tabloid in a country of trash tabloids, The Daily Telegraph. Sigh*

Fortunately one can go to other, far more credible sources of news, follow-up developments and vigorous reader commentary and exchange of views to get the real picture. There are many, but this one I find particularly good:

I did email this link to Julie Bishop, suggesting that in “standing in solidarity” with Theresa May she was essentially standing knee-deep in BS, but Julie seems not to have noted, for next she was standing by Malcolm Bullturd as he delivered his deranged Russophobic rant. Oh well, one can only try.