Why did Fairfax cut Pascoe? … Yanks tune in for Stormy … Sun’s ‘honest mistake’ …

Fairfax face questions over the departure of Michael Pascoe. Americans go nuts for the Stormy Daniels interview. Plus, other media tidbits from the day.

Why did Fairfax cut Michael Pascoe? Fairfax hasn’t explained the reasons for cutting long-running business columnist Michael Pascoe from its roster of contributors. Yesterday, a spokesperson told Crikey the cut was a “one-off editorial decision based on a number of factors”, despite newly appointed group executive editor James Chessell telling Pascoe in an email it was down to budget reasons.

In the email, seen by Crikey, Chessell said the decision was made “in the midst of preparing budgets for next financial year”. “There is a renewed focus on cutting costs from contributors and keeping costs (in general) down,” Chessell wrote, saying there had been some “tough choices” made. He did not give any further reasons for cutting Pascoe’s column.

Americans tune in to Stormy Daniels. Sex sells on mainstream US free-to-air TV. American viewers loved Stormy Daniels on 60 Minutes — and Americans are going to get more of her after she and her lawyer made major changes to legal action against President Donald Trump. 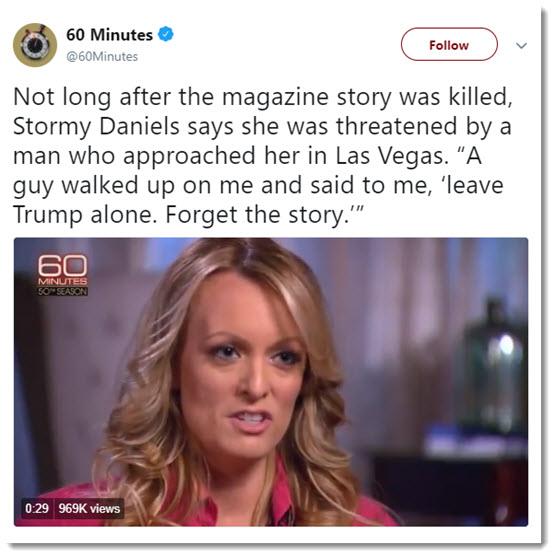 According to Nielsen ratings data, the Stormy Daniels interview on Sunday night was watched by 21.3 million viewers — a 10-year high. That was up 111% from last week and was its most-watched episode since the interview with Barack and Michelle Obama in November 2008, shortly after he was elected president which attracted 24.5 million people. And, annoyingly for Trump, it was also considerably more than his own post-election appearance in 2016, which averaged 18.8 million viewers.

Incidentally, none of these interviews came anywhere near the 48.5 million who watched when Barbara Walters interviewed Monica Lewinsky on ABC’s 20/20 program in March 1999 about her affair with President Bill Clinton. An estimated 70 million people watched at least six minutes of that two-hour interview program. — Glenn Dyer

The Sun’s “honest mistake”. British tabloid newspaper The Sun has retracted and apologised for a breakdown of savings it said British shoppers would get once the UK left the European Union and no longer was subject to EU tariffs.

The list, published in February, was run under the headline, “Here’s some of the high street savings we can make after Brexit if Jeremy Corbyn doesn’t become PM”. Four people complained about it to the UK press regulator for failing the accuracy standard, and an extensive clarification of all the calculations was published as that complaint was being processed.

The Sun‘s calculations were made based on retail prices, but the tariffs are applied when the goods arrive in the UK. There were a number of mistakes in calculations and facts, all set out in a clarification published yesterday. The paper, which has campaigned heavily against Labour leader Jeremy Corbyn and for Brexit, said the errors were all an “honest mistake”.

Nothing to see here. The Australian Financial Review editorialised today about how a “loss of purpose lies behind all our scandals”. On page 5 of this morning’s paper, we got a perfect example of that loss of purpose. There, the paper’s two senior political reporters, Laura Tingle and Phil Coorey jointly reported on how a secret survey from the Business Council “shows tax cuts won’t go to jobs”. It is an explosive report that undermines the BCA call for corporate tax cuts and the Financial Review’s wild-eyed support for the idea.

As we saw this morning that story started: “Fewer than one in five of Australia’s leading chief executives say they will use the Turnbull government’s proposed company tax cut to directly increase wages or employ more staff, according to a secret survey conducted by the Business Council of Australia.”

The BCA has 130 members, so that means around 26 of them would increase pay or boost employment — the rest would either return more funds to shareholders or lift investment. The latter would have been a good outcome, but the split between rewarding shareholders and investment was not broken down. So why relegate this quite significant story to page 5? Well perhaps page 1 prominence might have embarrassed the AFR. After all it was only last week that it trotted out the letter to senators story from the Business Council and 10 (out of 130) of its members. The 10 pledged to reinvest the proceeds of the corporate tax cuts with the ultimate aim of increasing wages. The Tingle-Coorey story throws the sincerity of that claim into considerable doubt.  — Glenn Dyer

TV ratings. A solidly entertaining night, thanks to Nine and the ABC — assisted by The Project running the Stormy Daniels interview from US 60 Minutes. Young Sheldon (1.57 million nationally) on Nine was a more than OK prequel to The Big Bang Theory, and the ABC’s usual Monday night line up of Australian Story (1.07 million), Four Corners (1.07 million nationally) and Media Watch (930,000 nationally) was the strongest it has been for some weeks.

But then,  the competition — Australian Spartan, 676,000 on Seven and Batchelor in Paradise, 838,000 on Ten — wasn’t great. In fact despite all the hype for Bachelor, the ABC still beat Ten both in total people and overall, and the ABC’s post 7pm programming ran second to Nine’s. Oh, and the ABC’s main channel (16.4%) finished second to Nine’s 20.5% and ahead of Seven’s 15.3%. Ten’s main channel share at least managed to climb above single digits, where it spent much of last week and the week before.