Industry publication AdNews has been taken in by a satirical post from The Betoota Advocate.

If there’s one thing journalists should know, it’s not to publish something from a satirical news website without checking it first. It’s a lesson industry magazine and website AdNews is reflecting on after publishing a story about The Betoota Advocate.

For a short time this morning, the site published a full story based on a post from The Betoota Advocate claiming to be a legal letter from Cricket Australia over some of their coverage of the ball-tampering scandal. 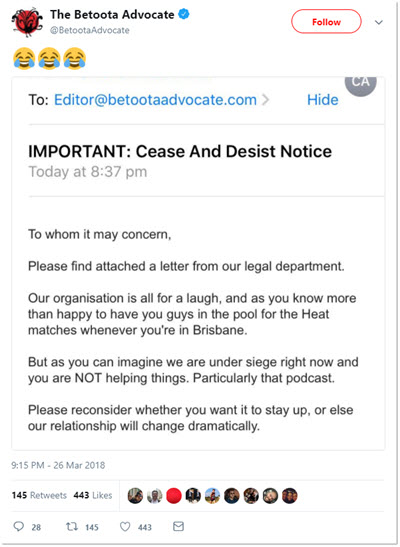 The tweet, posted last night, featured a fairly obviously fake email from “Cricket Australia”, which threatened legal action over some of the website’s content, “particularly that podcast”. “We are under siege right now and you are NOT helping things,” the email supposedly read.

Though the AdNews writer speculated the tweet could be a joke, the site published the story without comment from either the Betoota Advocate or Cricket Australia. The story was taken down shortly after it was posted. 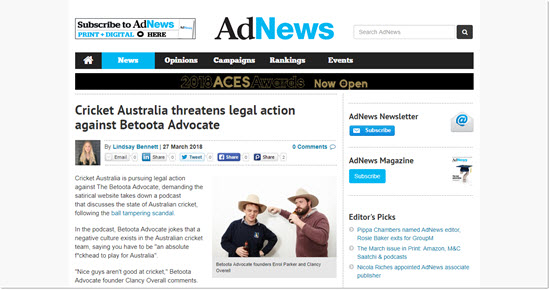 When the story was still live, Cricket Australia confirmed to Crikey that it did not have anything to do with any legal letter sent to The Betoota Advocate and there was no such legal action being taken against the site.

“It was an innocent mistake — sometimes these things happen and we always correct the record,” he said.

A fine line between (bad) satire and fake news.

Everything from the mudorc’s Augean stables is fake news and the satire is entirely unintentional – being so far from reality that the myrmidons can’t tell the difference.

AR: Congratulations for the excellent use of the word myrmidons. It’s great to see a dram of decent english.

Ta – Zeus made people from ants to repopulate the land after a plague but the mudorc turns people into ants to spread his plague of partisan poison.