Australian media has absolutely lost its mind for this cricket scandal

Five years on from the “blackest day in Australian sport“, Australia’s cricketers, and the media, seem to have found an even darker shade of black. The cheating scandal has dominated talk radio, news bulletins and all of Australia’s front pages dominated by the story.

Former captains and players have been readily available for op-eds and TV appearances. Michael Clarke first appeared on Nine’s Sunday Sport yesterday morning, then again on Today this morning. Simon Katich, Brad Hogg and Adam Gilchrist have all made appearances to share their thoughts, and the Daily Telegraph today has an op-ed from another former captain, Ian Chappell, calling it a “dark day in Australian cricket”. As part of its coverage, The Australian ran pull quotes of tweets and comments from Shane Warne, Ian Healy, Kevin Pietersen, Mitchell Johnson and Jason Gillespie.

Of the many think pieces getting a run today, Fairfax cricket writer Malcolm Knox’s pulls the longest bow, calling the scandal cricket’s “MeToo moment”, a reference to the movement encouraging victims of sexual harassment and violence to speak out.

And the prize for the quickest advertiser to capitalise on the story must go to sports compression apparel company Skins, who took out a full-page ad in The Sydney Morning Herald, published on page seven. The ad is a letter/lecture from executive chairman Jaimie Fuller to the Cricket Australia board, calling on it to reveal the details of the scandal in the coming days. Fuller wasn’t afraid to give himself a pat on the back in the letter, with a line referring to “collusion” between the cricket governing bodies of England, India and Australia to take the biggest slice of revenue: “It was a terrible chapter in cricket’s history and, thankfully, on that is now right — courtesy of the work of campaigners, including my own company Skins”. 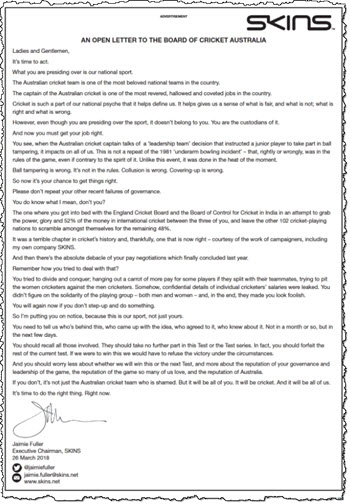 It isn’t just the media. Everyone I know is shocked beyond belief and completely disgusted by the actions of some senior members of our test cricket team. Steve Smith seems not to understand the seriousness of what he has persuaded a junior team member to do, and the effect it will forever have on his career. The phrase, “it’s just not cricket” didn’t come from nowhere. Cricketers – especially Australian cricketers as they have often been at the top of the game – should be beyond reproach.

Ah, but Lucie, if you’re up for a sledge (give it to him Warner), or if you’re prepared to virtually take a dive when your shoulder is nudged by the triumphant bowler (go on Steve, fall on the ground in tears), you are not beyond reproach (scold, censure, disapproval) and you never intended to be. Perhaps we shouldn’t take our test cricketers (once called flanneled fools) quite so seriously.

My thoughts exactly Hugh. When it is deemed ‘just part of the game’ to be a complete and utter prat, a foul-mouthed fool, an abusive and insulting cricket ground warrior, and then imagine that there is some line that you can’t cross – just don’t veer into race, and don’t call out my wife and/or children and/or mother – just leaves them dizzy constantly weighing up right from wrong, without realising that they were already way way out on the ‘wrong’ side.

Not surprised that this has happened, and plenty of evidence prior to cameras that this was a regular event, picking at seams etc.

It’s just not cricket was always a wayward saying, since bodyline I’d say. Should be changed to ‘It’s just not golf.’

… “it’s just not … lawn bowls… croquet?”
Have we really, rilly come to this?
yeh, probs

SA captain has been caught twice & found guilty on both occasions….. Smith at least admitted his guilt.

Smith colluded with other senior players to cheat, bravely delegated the task to a junior team member (someone who probably could not say ‘no’), then seemed to think that saying ‘gee, I’m really sorry’ would be a get out of gaol card.
Smith has shown poor judgement bordering on stupidity in the conspiracy, execution and handling of the fallout of this event. In addition, he’s acted in a cavalier fashion with regards to the future of his team mates. It doesn’t seem to have dawned on them yet the permanent damage they have done to their own careers on and off the field.
Our national represetatives have behaved like entitled brats and deserve to be called out.

Meanwhile the Australian Women’s cricket team is touring India courtesy of a Commonwealth Bank sponsored tournament.
It’s almost like there isn’t a Royal Commission going on at the moment exposing the Commonwealth Bank for its unethical and grubby behaviour. Can’t imagine why sportspeople think it’s ok to cheat when the very companies that effectively pay their wages are the biggest cheats on the planet.

This bit of cheating shouldn’t be surprising, given the now-complete victory of greed and aggression over ethics and fair play. With Trump in the White House, the BCA, the IPA and the right-wing religious lunatics running Australia and the Tories stuffing up the UK how could we expect anybody to play by the old-fashioned rules?

Absolutely, Rumtytum. A sign of the times – Banking Royal commission anyone?

Weird it is.
People in my orbit today are obsessed with it also.
Maybe it’s a sign of something more in the air in Australia in these times.
Sort of the last straw; even bloody cricket’s not being played in the spirit of the game.

Does anyone else think this whole episode is an example of today’s Talkbull (yes that pollie and his mob, but also the standard of everything here) 2018 Australia?
We seem to becoming a cheap imitation of dog eat dog, lie and win, cheat and win, bribe and win, might is right, and who cares anyway America.
It is time to remove the following words from the Dictionary: Ethics, Honesty, Integrity,
Responsibility, Compassion, Principle and similar.
I would suggest Principle gets confused with Principal and needs redefining. It has been said often, “the last time any of our Politicians had a principle was when they were in High School.”