There has been another high-profile victim falling to Fairfax's budget cutting measures. And other media tidbits of the day.

Fairfax cost-cutting. Fairfax is cutting again, with vastly experienced business commentator and regular contributor Michael Pascoe announcing this morning on Twitter that he was the victim of another purge at the battered company. “Fairfax cost cutting continues, including inexpensive contributors. I’ll be filing my last column for @smh @theage @brisbanetimes @WAtoday on April 15,” he tweeted.

But Fairfax said in a statement the decision to remove Pascoe from its roster of contributors was not simply down to cost-cutting: “This was a one-off editorial decision based on a number of factors. Decisions are taken from time to time to change our roster of contributors and we always seek to serve the best interests of our readers. We have thanked Michael for his contribution over the years.”

In May last year, Fairfax announced 125 jobs were to be cut, as well as a reduction of the contributors’ budget.

Front page of the day. The success of the AFL women’s competition is still a distant second to the men’s game, especially if measured by the front pages they get. The grand final on Saturday just made the front of The Sunday Age — a far cry from the days and days of front-page coverage dedicated in both Melbourne papers for the AFL grand final. 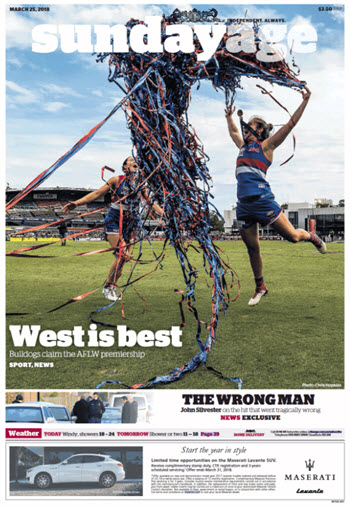 Cricket scandal’s rights impact. Three days ago an unhappy Cricket Australia told the networks bidding for the future broadcast rights to lift their game. After the Steve Smith betrayal in South Africa, it’s Cricket Australia that will have to take what it can get from the media giants. Fairfax reported on Saturday that networks were told to resubmit bids just days after the first deadline, with none acceptable.

Twelve hours later the ball-tampering scandal broke and the value of the rights went south, especially for test cricket, one day and T20 internationals. The Big Bash rights are probably not impacted because test players, especially Smith and vice captain David Warner, are not involved. Cricket Australia had hopes of getting around $1 billion for the rights for the next five years, against the $500 million for the current contract that is about to expire. Fairfax and other media suggested the first round bids are around $900 million. After this scandal, that will be too high. — Glenn Dyer

Facebook’s apology. Facebook founder Mark Zuckerberg has taken out full-page ads in some British and American newspapers with an apology for the “breach of trust” that has been the Cambridge Analytica scandal. The ads were written as a letter signed by Zuckerberg, under the headline: “We have a responsibility to protect your information. If we can’t, we don’t deserve it.” The apology comes a week after Facebook announced it was suspending Cambridge Analytica’s accounts, suspecting that it violated Facebook policies. That was prompted by an investigation by The Observer in the UK and The New York Times, that reported the company had harvested personal data belonging to more than 50 million Facebook users.

Glenn Dyer’s TV Ratings. Ten started Bachelor in Paradise and it could only grab 939,000 nationally for the launch ep. Tonight is the big test — how many of those will return? Seven snuck the first final of Australian Spartan into the schedule last night and it could only manage 758,000 viewers. Grand Designs on the ABC (958,000) from 7.40pm beat Bachelor and Spartan — a big message for Ten and Seven there about serving up crap. Ten at last ended up third in front of the ABC in the metros. But it wasn’t much of an achievement.

Insiders dominated morning TV — 580,000 on the ABC main channel and ABC News. The cricket ball tampering scandal saw the audiences for Offsiders boosted to 363,000 on ABC News and the ABC main channel, while Nine’s Sports Sunday saw its audience jump to 317,000. That’s over 650,000 people tuning in for sports chat for half an hour or so. The 207,000 that watched Insiders on ABC News is one of the biggest audiences ever for the ABC’s news channel.

NOTE: This story has been updated to include a statement from Fairfax.

Sad to see Pascoe go. He has enough experience to understand and set out the bigger picture in an issue. I considered him to be similar to Alan Kohler in that respect.

Interesting – Fairfax jettisoned Michael West and now Michael Pascoe, both centre leftish, but took on David Crowe, who is very rightish. The paper seems to be moving right – I guess reflecting that only old people still buy papers. The fact that there are a whole lot of old lefties out here seems to have escaped their notice, despite the fact that many of those who waste their time and energy making comments on articles identify as children of the 50s and 60s.

Agree with both these comments re Michael Pascoe and Michael West, we are being dumbed down yet again. Who’s next, Ross gittins?
Michael Pascoe is also great on The Drum when he very occasionally appears, unlike those morons Greg Sheridan and Judith Sloane. Don’t mind rightish if they are vaguely sensible like say Chris Berg, but some are off.

Fairfax have for years been driving away their old subscribers and going after the Herald Sun’s readers. Why they think this is a smart strategy, rather than going for the unserviced market in the centre and on the left, is beyond me; it seems to more a reflection of the Fairfax board’s political leanings than an actual business strategy.

Perhaps if holding “our” information is too difficult, it might be a great idea not to collect it in the first place?

“After this scandal, that will be too high.”

This is short-term thinking. With respect, the rights run for 5 years and much bigger scandals than this have blown over. The value of the AFL rights was not harmed by the “blackest day” and the Essendon drugs saga, the Olympics survived Munich, Atlanta and drugs scandal after drugs scandal, etc.