Even critics of Trump's company tax cuts didn't predict just how much of them would flow into boosting share prices and looking after shareholders.

We’ve been tracking the remarkable surge of share buyback announcements by US companies this year for some time, and the pattern is now clear. The Trump tax cuts aren’t going into new investment — in fact, remarkably, investment has fallen in January in the US — but into share buybacks that reward shareholders and goose the share price to the advantage of company executives via their remuneration packages.

But what no one seems to have expected — not even critics of the tax cuts — are just how massive the rise in share buybacks actually is. JP Morgan analysts are now predicting that 2018 will see — by far — the highest level of share buybacks in US corporate history, smashing the previous record of 2007 and topping $840 billion. Even if actual buybacks come in a little under forecasts, as they have in recent years, it will still be a easily the biggest year in share buybacks ever. 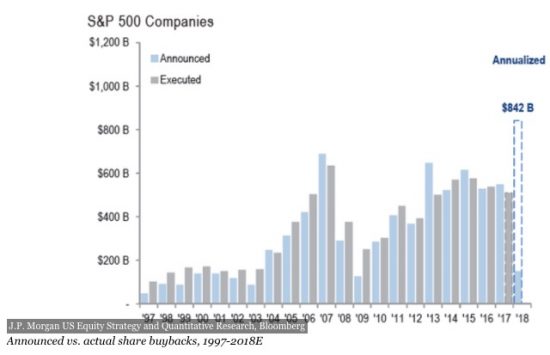 It provides a reality check for the lies being peddled to crossbench senators by the Business Council — and repeated by media stenographers — that tax cuts will simply flow perfectly into new investment and wage rises. Sadly, you won’t read about the buyback bonanza in outlets like the Financial Review, where the topic is apparently verboten for Not Fitting The Narrative.

Mother Jones’ Kevin Drum a month ago:
“Republicans said their big tax cut would spur corporations to invest more and give their employees big raises. Everybody else said it was far more likely that corporations would spend most of the money on stock buybacks, which would increase the value of stock owned by CEOs and wealthy investors. It looks like everybody else was right:”
https://www.motherjones.com/kevin-drum/2018/02/surprise-corporate-tax-cuts-are-making-the-rich-even-richer/

Corporate numberdunces’ “grow the pie”of wealth by putting labour to work on their capital, no, not when they can instead artificially inflate their share values on the basis of nothing at all in increased wealth creating capacity; sham wealth, in other words, which will be measured in dollars which must depreciate.
The equivalent of Adam Smith’s lairds who, upon inheriting the treasury, invest in another useless wing on the family seat, or more Parisian diamonds (Marie Antionette anyone?) for the family jewels, leaving the next inheritors plain broke.
The next GFC to be precipitated by Russia and China”interfering” in this market, while setting themselves up to survive?
Or will the West just conveniently just bury itself with no outside help needed?

Derryn Hinch, have you read this? Is this just and fair, Justice Party person? Will you vote down the company tax cuts or play to corporate self interest and greed?