Interviewing Helen Garner made me question the journalistic process

The author of Skin in the Game explains the slightly awkward process of learning how to interview Australia's best known true crime writer.

As an interviewer, my earliest and most formative experience of the journalist-subject relationship was a university assignment I did on Helen Garner.

Garner had agreed to talk to me for a political profile on the condition that the piece was not for publication. Over a four-hour lunch, we talked in depth. I was star-struck as she spoke as if to an equal about feminism, politics, her life, her work and her relationships. I wrote down her answers as fast as I could. Without a second thought, I proudly posted her a copy of what I’d written as soon as I’d finished it. I couldn’t wait for her reaction.

She was not pleased. On 10 June 1980, she wrote to outline 15 (she numbered them) “inaccuracies” she wanted cut or changed. (But it was too late as I’d already handed the work in.) Her letter said:

I think I assumed a certain detailed knowledge on your part which shouldn’t have been assumed — I suppose the gap between our ages makes that a difficulty. I also think that, unless I have a false idea of the way I speak, you have somewhat distorted my tone, which in written talk exists in turns of phrase: some of the turns of phrase you’ve attributed to me I am sure I would never have said, in a fit. But that is just a matter of experience, I expect.

I wrote back apologising for the inaccuracies I was prepared to acknowledge and arguing the toss on others. Garner replied:

It is always traumatic to see the way another person has perceived you, especially when you feel you have talked a little too freely about things which would have needed much more careful explanation in order that they be fully comprehended by the other person. The oddest thing about the written interview, for me, was the strong sense of our being from different historical periods. This shocked me in the same way that one is shocked by any unexpected revelation of the fact that TIME PASSES. Also, I talked to you about things I ought not, like Bill and our marriage and subsequent events – not because they’re secrets but because (forgive me) you are too young for me to be so flip about it and for you to understand what’s behind flip talk like that. I have learnt a lot, as I probably said, from all this and I think you have to. Please forgive me if I have been offensive.

When I look back on that assignment and Garner’s handwritten letters which, at 18 I saw as so patronising and humiliating, I now know how she felt. I cringe at my spelling mistakes, careless segues, youthful presumptions, inaccuracies and misinterpretations. Where she had been flip, I had been flippant about her story in what I now see was my attempt to emulate the raw, edgy style of the underground press for which she had once written. But inexperience had led me to be clumsy and to cut corners with expression.

In 2011, I began work on my doctorate of creative arts, which explored the ethics of storytelling. Just as interviewing and the ethics surrounding it had become of great interest to me, the same was true for Garner. I wanted to talk to her about what had gone on between us — with me as interviewer and her as subject — all those years ago. I wondered if it would be possible to create an account of an interview with which we could both be happy — a departure from a traditional journalistic interview, a collaborative experiment. The idea thrilled me.

But when I contacted Garner to ask if she was prepared to revisit our 1980 experience together, she told me she had no recollection of it. I said I was surprised. When I ran into her in Elizabeth Bay in Sydney during the 1990s, she greeted me by name. And we had only met that once. “Something is stirring in the mud of my memory,” she replied.

She could not remember the details of the original interview but agreed to be reminded of it and to work with me to piece together a reflection of it. A few weeks later we met face-to-face in Melbourne. I asked Garner whether she had ever interviewed someone who had opened up to her too freely without realising what they were doing and how much they were revealing. She said:

In a long interview the person will talk more and more freely, and then they’ll cross a line. You sense it, that moment when you’ve drawn blood. But often the person doesn’t realise. That’s when you get anxious. You know you’ve hit pay-dirt, but it would be superhumanly noble to stay, ‘Stop now! You’ll be sorry if you tell me any more about that.’

Late in 2011, I sent Garner my edited transcript of the raw (second) interview, which had lasted two hours. Over the next few months we were in regular contact by email, text and phone to negotiate edits. Garner was professional, patient and engaged; demanding of me but equally of herself. She was exacting.

I learned a lot about how her writer’s mind works through exchanges like these:

Because is a word that should often be cut in interview transcripts. In speech it acts as a link and time filler but on paper it’s dull, ugly and not logical though it claims by its very nature to be logical. You could use punctuation more to make it run more intelligibly!

For Helen Garner, the raw interview is like an unrefined mess. She fully expects her words and ideas to be transformed by the interviewer into an elegant form — not necessarily to change or twist meaning but to sharpen and hone the thinking and language into something well shaped.

It was here that I began to realise how things between us might have ended so badly in the first instance. To a newspaper journalist, the raw interview is your most precious resource. You can push it around and shape it, sure. But only so much. For there is a certain purity to the interview, especially in a news context. You stay pretty close to the rhythm and spontaneity of the conversation. Deadlines usually see to that. Garner doesn’t. She delves much deeper, for longer, interprets with more licence and uses fewer quotes.

My 8,000-word edited conversation with Garner was finally published in Meanjin in winter 2012. A few weeks after its publication, Garner emailed me. She was happy with how our collaboration had turned out.

So was I. And, for the most part, I still am, although I have since reflected more deeply on the idea that the collaborative interview could risk being so choreographed it may deprive the reader of the fruits of a spontaneous interaction between author and subject: that the two could conspire to construct their story. Or, as Garner might put it: no one loses any skin so nothing happens.

This is an edited extract from Skin in the Game: The Pleasure and Pain of Telling True Stories by Sonya Voumard (Transit Lounge).

Anna Krien opens up to Helen Garner on sex, sport and consent

Helen Garner cheats death — unlike some of her subjects 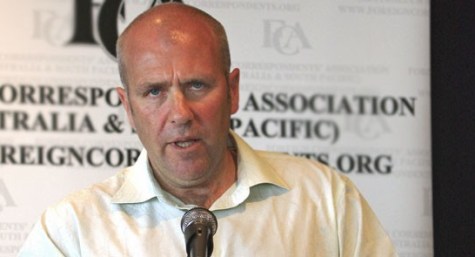 For someone presumably now around a half century old, “look at me!” is pretty weak.
What is Crikey playing at lately?
It’s not as if there were not many issues of importance but instead we get more & more stuff that belongs in a suburban writing group, with ‘must do better’ in red ink.