Journalist Louise Milligan, author of Cardinal: The rise and fall of George Pell, has been ordered to transcribe her shorthand notes as she prepares to give evidence in Pell's court case.

A journalist’s nightmare. ABC journalist and author Louise Milligan is facing a journalist’s nightmare after being ordered to dictate or transcribe 100 pages of her shorthand notes before she appears as a witness in the Cardinal George Pell court case. Milligan is expected to give evidence about her book Cardinal: The rise and fall of George Pell and a report about Pell for the ABC’s 7.30 program. The court was told Milligan was too busy to transcribe her notes, which were “indecipherable”.

Milligan has responded to reports of the request on Twitter, saying she had taken “weeks and weeks” of her time complying with court requests in relation to the case. 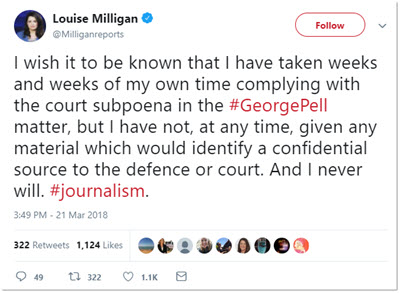 Exclusive watch. The Daily Telegraph loves to employ its red “exclusive” tag on stories. But, as our former Crikey colleague Josh Taylor pointed out on Twitter this morning, this “exclusive” was particularly bold, given the third paragraph quote and crux of the lead is attributed to another publication, The Verge.

Murdoch still recovering from boating accident. Rupert Murdoch has now been absent from the office at 21st Century Fox and News Corp for three months as he recovers from a holiday injury that has left his son Lachlan in day-to-day charge of both boards, with James Murdoch running 21st Century Fox. Some US reports now speculate the injury, a compression fracture to his back, is so debilitating that Rupe’s involvement in the affairs of both office will have to be curtailed.

The Hollywood Reporter overnight wrote that Murdoch has been taking meetings at home and recently hosted a cocktail party at his estate for board members of Fox and News Corp. “I’m doing great. I appreciate if anyone is worried about me but they shouldn’t be. I’ve been busy with meetings at home but I’m looking forward to being back in the office in a couple weeks,” Murdoch told THR in an email.

With the Easter break a week away, it is clear Murdoch will remain at home (and on his back) in LA until mid-April at least. No doubt we will see a contrived scene that shows Murdoch walking into an office, possibly in New York where the Fox and News Corp HQ’s are, to try and reassure investors and others. — Glenn Dyer

Glenn Dyer’s Tv Ratings. Married At First Sight ended with a bang last night, hoovering up a record 2.4 million national viewers (to become the most watched program of the year so far). More than 1.75 million watched in metro markets, and 648,000 in regional areas.  This helped the ailing AFL Footy Show — 460,000 national viewers including 250,000 in Melbourne (up from 174,000 last week and 173,000 the week before). But the reliance on the grande finale of Married means last night’s boost is meaningless — still no doubt Nine and Eddie McGuire and his gang will take heart from it.

But another way of looking at the figures, especially in Melbourne, is that over half of the 550,000 viewers for Married deserted Nine before the AFL Footy Show. That is a big turn off for a heavily promoted program, especially with the AFL season starting tonight. Buried by this result was another bad night for Ten, fourth again behind the ABC (Seven was crushed by Nine). Ten’s main channel share was 7.3%. It’s total share of 11.3% was pipped by the ABC’s main channel share of 11.4%. That tells us how weak ten was last night.