Former Fairfax editorial director Sean Aylmer has called journalists "insecure" and "miserable", while describing how he needed to pull back from being "too honest" in talking about restructures at the media giant because of leaks to rival outlets.

Fairfax boss: Journalists are ‘miserable’. Former Fairfax editorial director Sean Aylmer has called journalists “insecure” and “miserable”, while describing how he needed to pull back from being “too honest” in talking about restructures at the media giant because of leaks to rival outlets. Aylmer was speaking at an event hosted by content strategy company Filtered Media yesterday, and Mumbrella reported some of his comments:

For me, what I was doing was effectively making people redundant and downsizing and trying to explain this to a news room of cynical, smart journalists. As soon as I lied, I mean I never lied, but as soon as I stretched the truth, you’re in all sorts of trouble.

Tele defends Rush story (again). The Daily Telegraph has responded to yesterday’s adverse court findings against it in Geoffrey Rush’s defamation case. The Federal Court struck out the Tele’s truth defence, and a slab of its qualified privilege defence in the case brought by the actor over a front-page story accusing Rush of inappropriate behaviour while performing in the Sydney Theatre Company’s production of King Lear. In a statement, editor Chris Dore said the Tele was considering whether it would apply for leave to appeal this judgement — just one element of the legal proceedings. “The Daily Telegraph considers that its conduct in publishing the articles concerning a complaint made to the STC against Geoffrey Rush was reasonable,” he said.

Good feud guide. Conservatives have been getting increasingly worked up over an ABC Tonightly sketch which described an Australian Conservatives politician as a “cunt”. Yesterday, Communications Minister Mitch Fifield chimed in. The sketch was about renaming the electorate of Batman, named after Melbourne founder John Batman, who was involved in the murder of Aboriginal people in Tasmania. 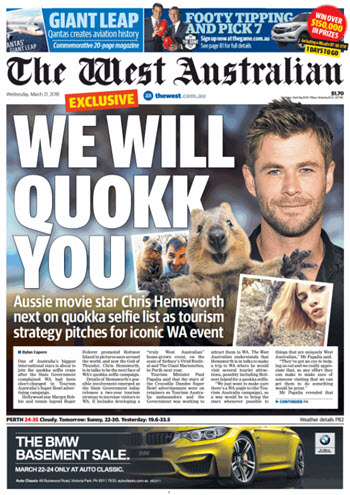 Glenn Dyer’s TV Ratings. Married On Fight Night, 2.22 million nationally — end of story, Nine’s night, as expected. Seven was left behind. The ABC and Ten shared third in total people (13.7%), but the ABC (9.7%) pipped Ten (9.3%) for third for yet another night in the main channels. My Kitchen Rules averaged 1.47 million nationally and was third behind Married and Seven News — a confirmation of its slide. the Good Doctor managed 1.37 million for Seven, but couldn’t pull it over the line last night.

Tonight Married At First Sight ends, so the ratings will be big for Nine. The AFL Footy Show follows in AFL markets (Melbourne, Adelaide, Perth and associated regions and Tassie). With a 2 million plus lead-in, it has to do better than the first two weeks, especially in Melbourne where it has attracted 173,000 and 174,000 viewers.

Re the C bomb on Tonightly.
Greg Larson the perpetrator, is a dark comic genius, his interview with Mark Latham earlier in the series was brilliant TV.

Being offended by something is not illegal.

I’m offended by this LNP government all the damn time yet none of them ever get locked up.