Hanson’s henchmen caught with their pants down, and the bereaved pay the price

From toilets to Twitter, the delusions of One Nation run deep.

Here’s a rare example of the combination of the most blatant political lie you’ll ever see, and an example of the truism that no good deed ever goes unpunished.

On Monday night in the Senate, One Nation supported the government’s welfare crackdown bill, the Social Services Legislation Amendment (Welfare Reform) Bill 2017, which would have, inter alia, cut access to (and the level of) bereavement payments to people who had lost a spouse, for a grand saving of $1 million. It’s a demonstration that extravagant cruelty doesn’t necessarily yield extravagant savings. Except, a couple of One Nation senators didn’t show up to the vote, and the government lost the vote on a tie.

So the government asked to “recommit” the vote — a legislative version of the schoolyard “rolls replay” — so the One Nation senators could vote this time.

Why weren’t the One Nation senators there? The dog ate the homework of one of them; the other was in the toilet.

Labor reluctantly agreed to a do-over.

Which the government won, cutting access to bereavement payments.

Because denialism runs so deep in One Nation, or maybe just because they’re a bunch of far-right wingnuts, they then decided it was Labor that was trying to kill the bereavement allowance. Malcolm Roberts, who now works for Hanson when he’s not investigating the role of the Rothschilds in global conspiracies, was quick to point fingers in this tweet: 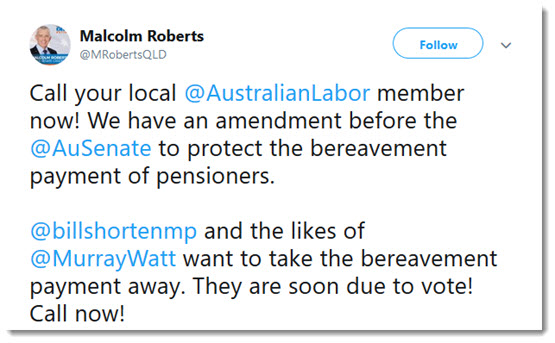 Don’t forget, these jokers are paid $200,000+ a year to sit on the toilet instead of doing their jobs.

Those PHON fellas contributions to Parliament are best left in the toilet.

We could all do with an update on how Malcolm Roberts’ pursuit of the Rothschilds is progressing. He recognises urgent global priorities & continues to make an invaluable contribution to Australia.

His best contribution was leaving parliament.

Was the senator supposed to cr4p himself in the chamber?