The other share economy. A speakerphone call between Karl and Peter Stefanovic, apparently recorded (or, more legally “memorised”) by an Uber driver has prompted two lines of inquiry in the media. First, what did the call reveal? And second, what’s the morality of the Uber driver sharing what he heard with the press?

It is reported New Idea paid the driver of the Uber up to $50,000 for information. According to finder.com, the average hourly income of an Uber driver in Australia is $35-$40 per hour. Uber takes 25%. So that works out to — at the higher end — $30 an hour. If you work the equivalent of a full-time week, 38 hours, that translates to $59,280 per year. But, of course, Uber drivers aren’t employees, they’re business owners, entrepreneurs — that money doesn’t count as a wage, it’s revenue. Out of that comes insurance, petrol, servicing loan repayments and any other costs associated with maintaining a car at a professional standard. It assumes the driver goes a year without getting ill, needing to care for a child or elderly relative, doesn’t have their car/workplace break down or be vandalised. That Uber driver hasn’t taken a holiday, or needed to attend a funeral on a day they would normally work. So, when a celeb sat in his back seat, speakerphone in his hand, this driver spied an opportunity to make, potentially, an amount he’d be lucky to otherwise cobble together in a year. It’s textbook entrepreneuralism, really.

Tim Wilson the social media influencer. We here in the Crikey bunker have been guilty of taking a dig at IPA-er turned Liberal MP Tim “Freedom Boy” Wilson. But his long relationship and eventual marriage to school teacher and utter dreamboat Ryan Bolger hasn’t been one of them … until now. After Wilson and Bolger tied the knot, he tweeted out a lovely little tribute: “Occasionally time stops. It is because of moments that can’t be re-lived. A snapshot in time. Of love. Of calm. Of comfort. A time when your joy overcomes.” Ending with “Thank you @InStitchu for dressing that moment.”

The shout-out at the end is to a high-endtailored menswear outlet that, according to Wilson’s declaration of pecuniary interests, provided a “wedding present” of a suit, two shirts and a pair of chinos for the happy couple. Dressing the Wilson’s with surely help Insitchu hit that coveted market of “classical liberal”, free speech campaigners turned Tory backbenchers. For Wilson’s part, it’s just solid fiscal management. 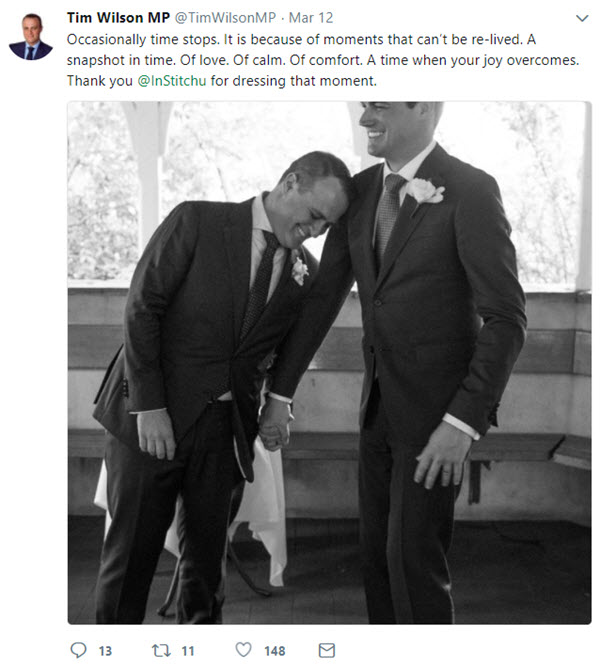 Triggs-er warning. Former president of the Australia Human Rights Commission Gillian Triggs is many things: a literate and committed advocate, an erudite speaker, a steadfast and dignified withstander of a News Corp Jihad. Until now, she’s never been renowned as a gag merchant, a bringer of zingers, if you will. But it would appear she’s been brushing up on her comedy material, having been included in a roster of comedians — including Zoë Coombs Marr, Dee Fidge, Aaron Gocs and James Colley — to deliver the laughs for “Nailed it!” in Melbourne in April. Describing itself as: “the ultimate experiment in dragging page views offline, Nailed It! assembles Australia’s finest comedians, journalists and everything in between”. We assume Triggs was booked under the “in between” category.

Insurmountable Rydge. Any human resources practitioner will tell you that the key to a good working relationship is honesty and clarity — be clear and communicative about the responsibilities of a job from the very beginning, including the job advert. And it would appear hotel chain Rydges is either being very frank about what their jobs are like, or, more likely we suspect, they’ve been hacked by someone who thought they could be a bit clearer. A tipster sent us a few screen caps of Rydges’ Seek.com profile, which replace the usual dot points describing tole role’s selling points (to pick a random example: “High Profile Sydney CBD hotel, Diverse operation and team with huge growth potential, Australian Owned and Operated Entertainment Company with staff benefits”) with some slightly less generous, all-caps descriptions of what the job offers: 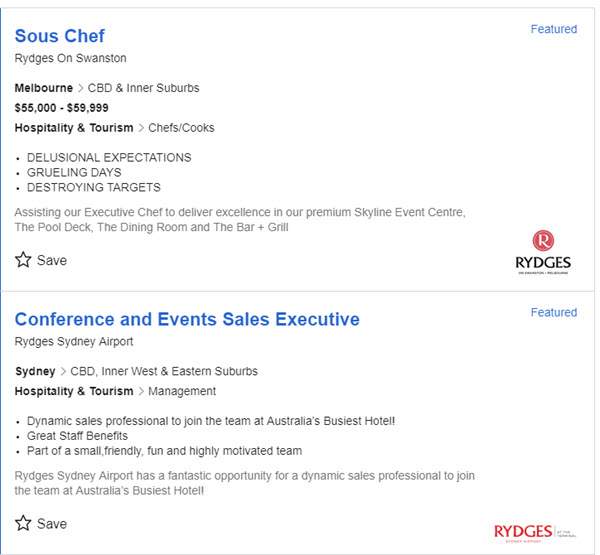 Watching the site over the morning it appears that as Rydges takes one tainted ad down, another pops up in it’s place — Hydra-style (the sous chef ad in our screen cap appears to be gone, but an assistant executive housekeeper role bearing the same imprint is still up). We asked Rydges if they knew who was behind this, but they didn’t get back to us before deadline.

Trust a Liberal to be tacky and vulgar on their wedding day. When you add all the freebies up you really start to wonder whether these politicians ever pay for anything themselves. Or maybe that is the whole idea of being a politician.