Coverage of bushfires in Victioria and New South Wales has illustrated which breakfast TV faction can handle an emergency, and which preferred to show Richard Wilkins on a rollercoaster.

Who takes news seriously in the important breakfast time slot? Judging by this morning’s coverage of the NSW and Victorian bushfires, there was one gold star, one merit badge and one fail. Work it out for yourself.

Seven’s Sunrise and ABC News Breakfast treated the terrible fires in Victoria and Southern NSW as big news stories — Sunrise hosts David Koch and Sam Armytage were in Bega for coverage of the Tathra fires, and Natalie Barr and Seven Melbourne reporters were in southwest Victoria. Their extensive coverage had the unfortunate side effect of bumping a counterpoint to last week’s disastrous panel that discussed white families adopting Aboriginal children.

Aboriginal Health last night tweeted that Sunrise had advised that their response, scheduled for 6.45am today had been postponed due to the bushfire coverage: 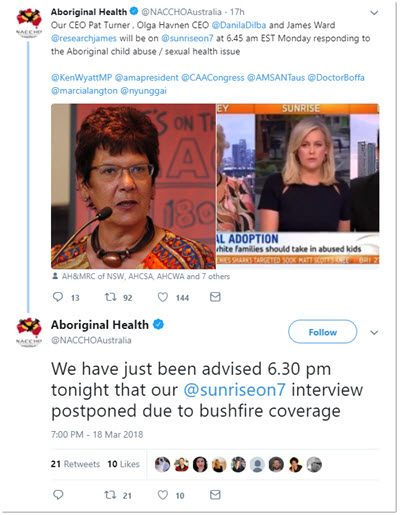 Over on the Nine Network, Today hosts Kark Stefanovic and Georgie Gardner were anchored in Sydney, with reporters in the field. But the coverage was hardly extensive — the show also included soft reports on the Commonwealth games and petrol pricing, and Richard Wilkins on a rollercoaster.

The decision to run the show as normal comes as Stefanovic is in the midst of (another) scandal, in which he reportedly blasted Nine bosses for being “out of touch”. Stefanovic and brother Peter were the subject of New Idea‘s cover story today, with details of a conversation they had on speakerphone in an Uber revealed, in which the brothers reportedly took digs at Gardner, Wilkins and news journalist Mark Burrows. The weekly magazine (owned by Seven West Media) said Karl spent the ride:

Detailing what was wrong with other well-known shows like 60 Minutes, Karl pointed out that ratings were down, and was even big-headed enough to outline advice for his bosses who have supported him through thick and thin,” New Idea reported. “‘He said they didn’t know anything and thinks they are out of touch,’ he (the Uber driver) confirms. “Both the brothers clearly think they are better than what they do and spent a lot of time complaining.”

ABC News breakfast hosts Michael Rowland and Virginia Trioli were in Melbourne in the studio, but had regular crosses to reporters in Tathra and south west Victoria.

At 8am, News Breakfast and Today hosted their news coverage from Melbourne and Sydney, while Koch and Armytage hosted Sunrise‘s from Bega.

I’ll still take Wilkins on a rollercoaster ahead of the show which lets Armytage and two more right wing cohorts todo a fact-free Pauline Hanson impression while inviting two more right-wing racists to smear indigenous Australians. Hardly their first rodeo with pandering to the Hanson demographic either.

not that I watch morning tv but i’d rather not see blanket coverage of other peoples misery due to unfortunate events out of peoples control (unless there is more informed debate on causes e.g. link between bushfires and climate degradation). Same goes with terrorist attacks, western media seems to collectively lose their st with blanket coverage of the misery on nightly news for many days (ABC is worst culprit for this). There is still real news out there during these times.