What’s an ABC story? … Panahi’s new Sky gig … how to cover a cyclone …

An internal review at the ABC has found that the national broadcaster focuses more on federal news and less on "hip pocket" stories, prompting recommendations to up the amount of human interest pieces.

What’s an ABC story? The ABC released on Friday a review of its news coverage compared to other outlets. Unsurprisingly, it found that the ABC covers more federal and international politics than its commercial competitors, and fewer general interest and “hip-pocket” stories. One of its observations was that there was an “opportunity for the ABC to increase the number of lighter, human or general interest stories it runs without trivialising or ‘dumbing down’ its (TV and radio) bulletins”. There has been regular criticism of the ABC that it is becoming increasingly tabloid in its approach to news.

Rita Panahi’s new Sky gig. Herald Sun columnist Rita Panahi is joining Sky News with her very own program. The program will air on Friday afternoons — called The Friday Show — and, she said in a statement, “will have the usual mix of politics and current affairs that Sky News viewers know and love but will also include pop culture, social issues and plenty of sporting content”.

According to Sky’s press release about the program: “Rita is passionate about a number of issues from the plight of women in the Muslim world to the suppression of free speech in the West.”

Wet journos. The weekend’s cyclone dominated the NT’s news coverage over the weekend, including a good dose of the particular genre of TV reporting that we see during such weather events: wet journos. The ABC’s Jano Gibson made several appearances in his raincoat during the day on the ABC, as did his colleague Kristy O’Brien. 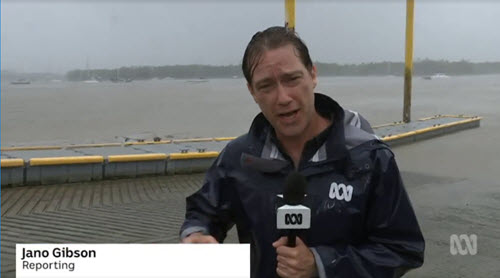 A special mention, though, should go to another of their colleagues at the ABC, Dijana Damjanovic, who reported live into Saturday night’s bulletin, in front of her own car, which was under a fallen tree.

The revolving door. Seven’s Mark Llewellyn has quietly left the network, The Daily Telegraph reported over the weekend. Llewellyn was executive producer of the axed Murder Uncovered on the network — a program he moved to from a dramatic stint at Sunday Night.

Exclusive watch. After Batman, comes the hour, cometh the bulldust. Here’s John Ferguson in The Australian today: “It was The Australian that broke the story of the infighting among local Greens, and bickering escalated as the campaign progressed …”

Well, we’re accustomed to the Oz plastering “exclusive” all over the TV listings, bowls results from Moama, etc, but this one tickled us in particular. Y’see, not only did this publication and this correspondent break the story of the internal complaints against Alex Bhathal, and the factional divisions associated with it, but the Oz actually credited us with it: “Reports in the online news journal Crikey said Ms Bhathal faced a complaint from some party members …”

Glenn Dyer’s TV Ratings. Married At First Sight is into the home stretch, so it will be Nine’s week, as it was Nine’s night last night with Married attracting a touch over 2 million viewers. Seven’s MKR was left behind again with 1.55 million nationally. Meanwhile the slump in Ten’s ratings continues — a 10% metro share in total people and a 6.3% main channel share, which is laughable. NCIS was Ten’s most watched program at 8.30pm with just 440,000 national viewers, just ahead of Ten News at 5pm with 416,000. The Sunday Project — 348,000 for 7pm and 292,000 for 6.30 pm —  also attracted pitiful figures.

Insiders was watched by 574,000 national viewers — 350,000 on the ABC’s main channel and a record 224,000 on ABC News. Landline was watched by close to an all time high of 467,000 national viewers.  In context: Insiders had more viewers than any program on the Ten Network in the whole of Sunday, as did Landline. Both had more viewers than the better resourced programs on Nine and Seven in the morning, and The Project and Ten News. And yet this success is ignored by the people who run ABC News and CEO Michelle Guthrie.

Yet again, tonight. I watched ABC 7.30 story on US gun control or lack thereof, marvelled at the fact that while letting their interviewees get away with the old furphy that ‘they’re trying to repeal the 2nd amendment’ and arguing teachers should be able to be armed, without once mentioning the fact a teacher was apprehended just a couple weeks ago running amok with a gun in a school in Georgia.
I switched off when they followed that story with another of those interminable, mind numbing medical/human interest/celebrity time filler stories. Why am I not surprised Insiders is beating commercial station rubbish.
Thank you [god] for the internet.

Friday is the day of prayer. I hope Rita’s show isn’t in the early afternoon lest the more devout members of her Iranian Muslim family miss out on seeing her on TV.

Just what Sky News needs. Another so-called journalist who makes gibbering right wing morons look intelligent. This would be the same Rita Panahi who, when given the golden opportunity to interview alleged betting syndicate swindler Bill Vlahos a couple of years back, absolutely squibbed it. Her insipid initial questions to Bill were waved away by him with pious platitudes and outright lies, and not once did she call him out on it, or follow up with anything resembling an actual incisive query. I can only imagine the steam that must have been coming out of the ears of her Herald Sun ‘colleague’ Andrew Rule when he read the putrid garbage she served up as investigative journalism that day.

‘[the ABC] is becoming increasingly tabloid in its approach to news. ‘ A large dose of castor oil should do the trick.