The Herald Sun's Paul Tatnell has taken a shot at The Daily Mail Australia in an ongoing pass-ag war over content theft. And other media tidbits of the day.

Casting the first stone. A favourite pastime of News Corp types is pointing out the regular ripping-off Daily Mail Australia does of its stories. The Daily Telegraph‘s digital editor Peter Brown will, on occasion, run the Mail‘s stories through a plagiarism checker to see how much they’ve taken from the Tele and tweet the results, and the Herald Sun‘s chief of staff Paul Tatnell last night tweeted about the quick turnaround at the Mail, rewriting the Hun‘s front page splash before it even hit newsstands: 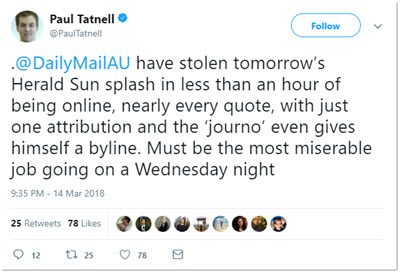 They should perhaps be a little careful, though, about going too hard on the Mail while News Corp Australia’s most popular (and free) news website, news.com.au, isn’t above ripping content from the Mail. Within hours of the Daily Mail Australia‘s low-brow story about a man caught having sex on a train was posted, news.com.au had ripped the quotes, with one link back, for its own version of the story.

More media gender pay gap reports. In the UK, national broadcaster ITN and Guardian News and Media have revealed their gender pay gaps of 19.6% and 11.3%, respectively. The reports follow revelations of a pay gap of 9.3% at the BBC. In a statement, Guardian said it was aiming for a 50/50 balance in the top half of the organisation within five years.

Facebook wooing publishers. Facebook is reportedly planning to launch a new daily news section, according to Axios. It would be a standalone news product in Facebook’s Watch platform, which would run for at least a year. Watch was launched last year in the US as a tab on Facebook for long-form video, carrying TV shows and sport.

Recycling (and re-recycling) Australian TV. There is very little that is new in TV here, or anywhere in the world. Formats are dreamed up, reworked, spun off, fiddled with, sold, buried, and brought back. Just take separate announcements from the Seven Network and from the ABC:

A dating show called Take Me Out is coming to Seven — based on a UK show of the same name, which was based on a former Ten show, Taken Out, which aired in 2008-09. Seven announced Thursday that comedian Joel Creasey would host the Australian program. In the program, the aim is for a single man to get a date with one of 30 single women on stage, each with a light they can turn off during a series of rounds where they learn about the man.

The ABC will screen Foxtel’s Wentworth and Grand Designs Australia. Wentworth (which is a spiritual successor to Prisoner, the classic Ten network prison drama from decades ago), starts on the ABC on April 12. GDA’s night wasn’t announced, but the ABC could slot it into Sundays at 7.40pm (after the news) where the UK version of Grand Designs is currently screening. — Glenn Dyer

Glenn Dyer’s TV Ratings. Ten’s most watched program was the 7pm part of The Project with 645,000 national viewers, but This Is Us (an American drama) could only manage 259,000 nationally (it just doesn’t click with Australian viewers) and The Graham Norton Show could only grab 356,000. Those figures are not even satisfactory for metro markets let alone nationally. An overall metro share of 12.7% and a main channel share of just 8% isn’t good enough.

The ABC had an overall share of 17% and a main channel share of 12.1% and will beat Ten into third for the week. The question now is how long CBS will allow this state of affairs to continue before lopping heads. But sacking people isn’t the rational way, finding and investing in new content and people (talent, not suits) is the best way. Elsewhere, Married At First Sight averaged 1.68 million and was number one nationally. It had tops in the metros with 1.18 million (and was the only program in the five metro markets to grab a million or more viewers). Nine’s night, easily.

The thought of NewsCorpse & the Daily Heil using each other puts me in mind of Ouroborous.

“A dating show called Take Me Out is coming to Seven — based on a UK show of the same name, which was based on a former Ten show, Taken Out, which aired in 2008-09. Seven announced Thursday that comedian Joel Creasey would host the Australian program. In the program, the aim is for a single man to get a date with one of 30 single women on stage, each with a light they can turn off during a series of rounds where they learn about the man.”

Isn’t this also basically a description of the Chinese megahit dating show “If You Are The One” which airs here on SBS?

I know we’re talking about channel 10 here, but you’d think the people at 7 who have spent countless hours of promo time during costly major sporting events on pushing such failures as Zumbo’s Just Desserts, Cannonball and Australian Spartan would be worth a bit of sacking…