Lehmo to replace Whateley … no equal pay for the Queen … Netflix’s news project? …

Lehmo is heading to the ABC. Plus other media tidbits of the day.

The revolving door. The ABC will replace Gerard Whateley with comedian Anthony “Lehmo” Lehmann for its Saturday and Sunday AFL radio programs. Lehmo was sacked from Melbourne’s Gold FM at the end of last year, and told the Herald Sun he would bring something different to the programs than Whateley: “It is a slightly different ball game because the agenda with Gerard last year took a more serious look at issues. We’ll definitely cover the big issues and I love serious footy chat, but I like to finish every conversation with a laugh.” Lehmo will co-host on Saturdays with Angela Pippos, and Sundays with Emma Race.

No equal pay for the Queen. Producers of Netflix drama The Crown have admitted Claire Foy, who plays the main role of Queen Elizabeth for the first two seasons, was paid less than Matt Smith, who played the Queen’s husband, Prince Philip. At a panel discussion in Jerusalem this week, producers said Smith earned more than Foy because of his fame from Doctor Who, but creative director Suzanne Mackie said in future seasons, where the entire show will be re-cast, no actors would be paid more than whoever is playing the Queen.

Netflix’s news project. According to US media reports, Netflix are developing a news program, similar to 60 Minutes. Marketwatch quoted a TV executive who has worked with Netflix on a documentary series as saying the streaming giant is looking at starting a weekly magazine-style current affairs programs similar in format to 60 Minutes or 20/20 on ABC.

“Netflix have spotted a hole in the market for a current affairs TV show encompassing both sides of the political divide and are seeking to fill it,” the unnamed executive told Marketwatch. Netflix didn’t comment on the plans. — Glenn Dyer

Sky News boss steps down. Sky News’ executive editor Rob Raschke has resigned as he awaits sentencing for assaulting his wife. Raschke, who has been on leave from the network, pleaded guilty to the assault last month. He had been with Sky for two years, after almost 19 years at Seven, and an earlier stint at the ABC. Sky News would not comment on the resignation.

Fake news. Elon Musk has reportedly been poaching former staff from satirical news website The Onion for his own secret project. The Daily Beast reports that Musk is financially backing a new comedy project, and has employed former Onion editor-in-chief Cole Bolton and executive editor Ben Berkley, who left last year after difference with company management.

Front page of the day. The New York Post‘s front-page splash on US Secretary of State Rex Tillerson’s sacking harks back to another memorable Post front page. 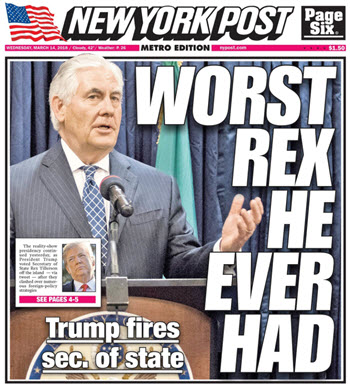 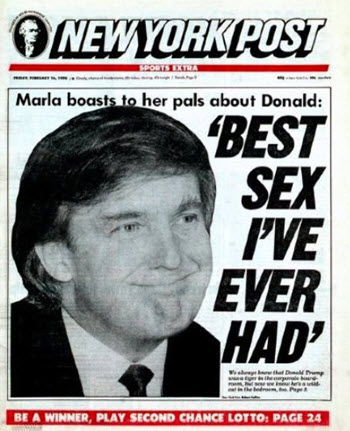 Glenn Dyer’s TV Ratings. Tuesday is The Good Doctor night and it was a win for Seven, while — post I’m a Celebrity — Ten struggled to make an impression. In fact Ten’s most watched program nationally was the 7pm part of The Project. From then on it was downhill, and as I have said before, Ten, you do have a problem with Hughesy — the 567,000 from 8.30pm last night is nowhere near enough. That was fourth behind Seven, Nine and yet another series on the human body on the ABC. Ten will finish fourth again tonight with its weak line up against the ABC’s News, 7.30, Hard Quiz and Mad as Hell.

Married was again tops nationally with 1.70 million. It was also top in the metros with 1.23 million, but fifth in the regions with 476,000. MKR was second nationally with 1.56 million, second in the metros with 1.03 million but tops in the regions with 530,00. The Good Doctor again was the star with 1.36 million from 9-10 pm, easily cleaning out the opposition and pushing Seven to its now usual Tuesday night win.

If you read on from that NYP headline, Marla continued “…was afterwards when Donald left the room to take a shower and I managed to bring myself to orgasm”.

One of the most respected and insightful sport’s commentators in the country replaced by a mediocre comedian. Right…