What can we learn from Tasmania’s surprise economic boom?

The success of Tasmania's economy, which has turned around from being one Australia's least impressive, could be self-perpetuating if state and federal governments can find a way not to screw it up.

I must confess to a mistake. A few years ago I wrote a couple of stories about Tasmania. They were negative — inflammatory even.

“Tasmania is struggling to keep up,” I wrote in 2013, before suggesting we kick them out of Australia’s currency union for their own good. “It’s clear Tasmania needs a kick up the bum,” I said.

I am pleased to announce that Tasmania has since applied that kick to itself. Radical measures were not required. In fact, the Tasmania story is a thing of beauty. It’s a redemption tale the equal of anything you might see in the cinema. In 2013 Tasmania’s economy was a disgrace. It had the worst unemployment in the nation, at 8%. Since then, the Apple Isle has got its act together. It overtook the mining states as they slumped, and more recently it pipped Victoria too. 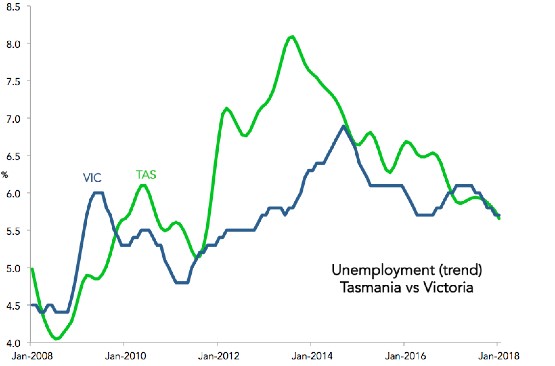 This is not the only sign of economic strength.

If Tasmania has figured out the recipe to turn a sluggish economy around, we need to know what it is. The rest of the country could use it. The Tasmanian government will want to take credit for what has happened, and so will MONA. But the answer could well be something else. What we see in the last few years is that Tasmania turned around its population problems. Instead of seeing people trickle out, there is now net inflow of Australians moving to Tassie. 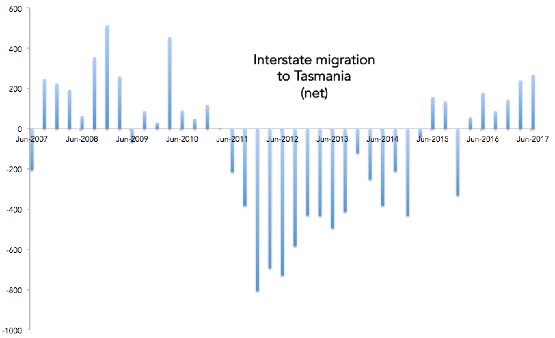 House prices are a possible explanation for this flow of people. The median dwelling price in Tasmania is the lowest in the country at $370,000. You can still pick up a large and beautiful heritage home in Hobart for under a million dollars. You can buy an ornate gothic mansion pretty reasonably too. If the choice is between living on Sydney’s far western fringe or ten minutes from town in Hobart, I can see why people might be keen to move.

If this is the explanation then the trick Tasmania is pulling is one Australia is already trying: immigration. Australia uses its wiles to attract people and prop up the economy, and Tasmania is doing the same, using what it offers best, which is affordable real estate.

Tasmania’s problem has long been a sense of decay and decline. Falling population, falling government revenue and falling GST share all buttressed each other. A booming Tassie comes with optimism that can, if the federal and state governments don’t screw it up, be self-perpetuating.

Tasmania has a couple of things it should do to keep the party going. Foremost is to get a bigger slice of Australia’s booming international tourism market. International visitation to Tasmania is barely ahead of the ACT. For such a beautiful state blessed with World Heritage Areas, this must change. One suggestion would be to reduce reliance on that slow and expensive passenger ship and instead encourage more passenger flights, more cheaply. International visitors don’t bring their own cars anyway and they are the growth market.

The second thing for Tasmania to do is put all its eggs in one basket. No other Australian state has two comparatively large cities as Tasmania does with Launceston and Hobart. With cities, scale matters, and modern services economies are driven by cities of scale. Politics means Tasmania can’t ignore its south at the expense of its north, or vice-versa. But imagine how broken SA would be if Woomera and Adelaide had half the population each. A big advantage of MONA has been to clearly mark Hobart as Tassie’s vital epicentre. Betting more on Hobart won’t hurt.

So, Tasmania, I apologise for being so rude five years ago. You had more guts and pluck than I expected. Tasmania has a huge future, not least as one of Australia’s most temperate places in an era of climate change. Here’s to more success in future.

Should we all move to Tassie?

Tasmanian recession? Not at David Walsh’s bizarre world of art

A visit by Xi Jinping has been pretty useful in flogging Tassie to Chinese tourists, as will be the soon-to-be-scheduled direct flights from Hong Kong. Already the airport terminal has been upgraded, although they still make the punters disembark into the elements with no skybridges.

Some population growth demographics would help enormously to understand Tasmania’s situation. Jason wrote, “If Tasmania has figured out the recipe to turn a sluggish economy around, we need to know what it is.” and “If this is the explanation [cheap housing] then the trick Tasmania is pulling is one Australia is already trying: immigration.” What Jason seems to be saying is that Tasmania’s ‘trick’ was to make it a place that no younger locals wanted to live thus driving down property prices and driving up unemployment (don’t mention education levels). The less dense population levels, beautiful natural attractions and cheaper housing makes it a perfect place for retirees who want a quieter life; I know of plenty who have made, or are thinking of making, the move (and it will cheer-up Bernard who thinks they are “corrupt” because they live near the big cities). If the population growth and economic upturn is due, to a significant level, to retirees moving there then it is a very different phenomenon to the short sighted economic argument for international migration. If the trend continues Tasmania will, in time, become like many small mainland coastal communities which have been loved to death. The reason for moving there will be destroyed and we are back to square one only with a significantly damaged natural environment.

Actually the most important thing Tassie has to do is to protect its assets – especially its wilderness areas and its built heritage – from over development. As is the case on the mainland, planning laws have changed in favour of developers, who are threatening the natural environment and the very quality of life that attracts tourists and tree changers alike. Oh – and building public housing for Tasmanians who have been displaced by rising house prices and rents is pretty essential too. Though the tourists won’t see them, there are people camping at the showgrounds for want of proper housing.

Yes we hear reports that the economy is doing well, but is it? As stated housing for renters and young people is not available – surely housing is a human necessity, and should not be a casino. Then there is the total lack of investment in infrastructure – a drive to work from where I live beyond the airport (only about 20 k from the CBD) is now like the traffic in Melbourne from which I fled – there is no public transport, apart from an infrequent and expensive bus service. The education and health systems are in crisis, due to zero planning or investment. The tourist boom owes far more to the MONA effect than any government policy, and even then the politicians are incapable of delivering necessary infrastructure to upgrade dangerous narrow roads or accommodation. Sewage and water are non-existent in many areas – we rely on tanks, so when the electricity supply is interrupted you cannot even get a glass of water as there is no power to pump water from the tank. I see no evidence of a desire to tackle any of these issues. Politics is corrupt – no further evidence needed than the recent election which was won by Federal Hotels and other gambling interests.

It’s only booming for some. Wages remain low, much more so toward the bottom end of the job market, while housing is experiencing unprecedented price growth. The rental market has contracted to 0.1% vacancy in some suburbs, people are seeing 25%, 30% price rises or simply non-renewal in favour of AirBNB (I’ve seen streets with 1 in 3 homes turned short term rental; an unassuming working class outer suburb has seen 94% growth in STRs year on year). Families are sleeping in tents at the Showgrounds caravan park in Hobart because there are literally no rental properties available. The influx of no-risk late career professionals with significant financial mobility has more or less collapsed the job market in many professions. All up for many people the situation has become a blazing inferno of insercure and under-employment, insecure housing and economic alienation from the very forces so lauded for the state’s transformation.
The present government’s best economic action in office for the last term was its near complete lack of action. The state is riding on a global lift after the storms of the post-GFC recessions receded, and any one economic shock internationally could very easily bug-splat the recovering economy.

I blame Rosehaven.
Another series will be fatal to the Merkin Isle.