A flow chart from the global strategy document sent to staff at the ACT government.

Yesterday, audio was leaked of Australian Capital Territory Chief Minister Andrew Barr expressing his hatred for journalists (which, you know, fair enough) and offering a brutal assessment of the commercial fortunes of local rag The Canberra Times.

“I’m over dealing with the mainstream media as a form of communication with the people of Canberra,” he told an assembled group of communications specialists. “What passes for a daily newspaper in this city is a joke and it will be only a matter of years before it closes down.

“We need to completely overhaul the way we communicate as a government and that’s exactly what we’re doing. My challenge to everyone in this room is to be at the cutting edge of communication, to put up contentious, risky and interesting ideas about how we can communicate.”

So with this in mind, we thought we’d check out the communications strategy for the ACT government and see what they’ve come up with now that, as they claim, the mainstream press has turned to carrion.

The strategy comes with a glossary of related terms, which veers between the delicious peaks of meaningless public sector speak (“deliberative democracy”), to the troughs of defining both conversations and listening, four different versions of “meet with the public” (minipublic, citizen panel, citizen jury, community panel) and several definitions that leave you no closer to the meaning of a phrase (“kitchen table conversations”, we’re looking at you).

Check out some of the highlights below: 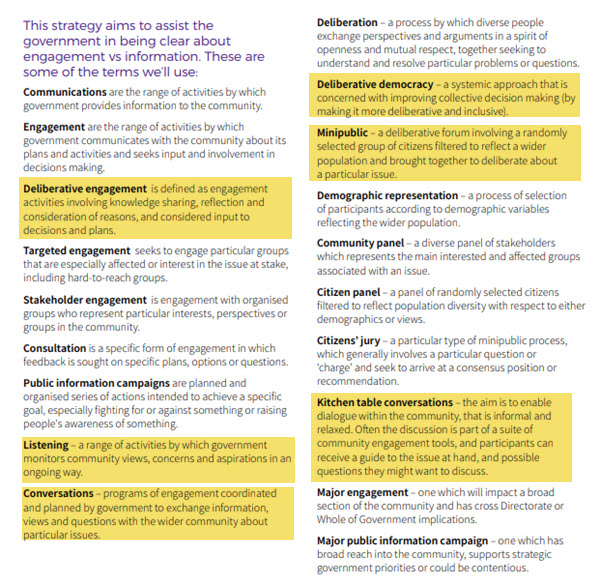 Despite being gifted an apparently guaranteed vote-winner, the ACT Liberals have failed again. Maybe land tax isn't the political killer it's made out to be.

Antipodean election junkies are preparing for a double dose tomorrow as voters go to the polls in New Zealand and the Australian Capital Territory.

Here is the latest on coronavirus social distancing rules in the Australian Capital Territory. This article will be updated on a regular basis to keep you informed.

Did you ‘google’ “deliberative democracy” in the process of writing this?

Is Andrew Barr living in a glass house?

You are kidding – “(click to enlarge)” -no way!
That would mean being able to see the abomination clearly.

I’d like to add a term to the strategy:
Voting booth: A deliberative democracy activity designed to impact a broad section of the government with an alternative lifestyle that results in non-engagement with the Canberra Times.