Studio 10 co-host Jessica Rowe made the surprise announcement on the program this morning that she would be leaving the network. In a statement on-air, Rowe said she wanted to spend more time with her family and be a "more present" mother.

Rowe out at Studio 10. Studio 10 co-host Jessica Rowe made the surprise announcement on the program this morning that she would be leaving the network. In a statement on-air, Rowe said she wanted to spend more time with her family and be a “more present” mother. 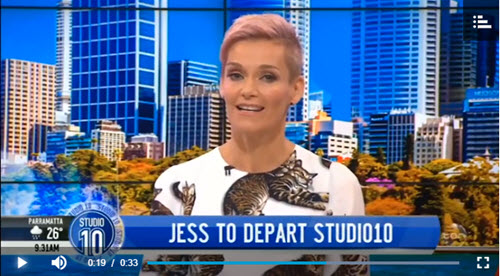 Former executive producer Rob Knight tweeted shortly afterwards that the Ten Network had been trying to get rid of Rowe for a year — a claim quickly rejected by Rowe’s manager David Wilson.

Rebel: ‘There is clear media collusion’. Actor Rebel Wilson, who won record defamation damages from magazine publisher Bauer over articles published in Woman’s Day, has accused the media of “collusion” in a series of tweets about the case. Wilson and Bauer have been back in court this week to determine costs to be paid to Wilson after she won the case. Bauer has appealed the $4.56 million in damages that the Victorian Supreme Court awarded Wilson last year, and most of Australia’s biggest media companies have joined together to argue they should also be heard in the appeal, saying the special damages could lead to routinely higher payouts. Regarding the appeal, Wilson tweeted: “What reputable Australian journalist or media organization, (*cough* hello, ABC who is funded by taxpayers *cough*) would stand with ‘journalists’ who have been proven guilty of making up rubbish stories and printing them knowing they are fake, all in the name of corporate greed.”

And, in another: “There is clear media collusion and they are now twisting what was a very simple story.”

Thumbs down for the Footy Show(s). After the first night for the 2018 seasons for the AFL and NRL Footy Shows, the message from viewers is clear — this could be the start of another miserable season.

Viewers stayed away from the Eddie McGuire-hosted AFL Footy Show. A total of 251,000 people watched in Melbourne, Adelaide and Perth, down from 273,000 from the opening night a year ago and its lowest ever opening audience for a new season, and a new low for Melbourne.

Last year the program was hosted by Craig Hutchison who was later gazumped by Nine management, and Eddie McGuire and his production company brought back to produce it. The McGuire-ed revamp started last August and failed to have any impact as ratings fell and Seven’s more modest offering, The Front Bar, moved past the Nine stalwart into top position in the pecking order for AFL programs on Melbourne TV.

NZ newspaper merger plan shelved. A merger agreement between New Zealand’s two biggest newspaper companies has been terminated while a competition regulator decision to block the merge goes through the courts. The NZME and Fairfax New Zealand, now known as Stuff, weren’t allowed to merge, with the regulator citing a lack of media diversity, where the plan to go ahead. They have appealed the decision to the High Court, and in a market statement yesterday said they would negotiate a new agreement if they were to be successful.

Glenn Dyer’s TV Ratings. Seven won last night by default — it had My Kitchen Rules in the line up and Nine had the NRL season’s first game. MKR had more than 1.4 million national viewers and the NRL 765,000 (an extra 261,000 watched the NRL game on Foxtel). Gogglebox Australia on Ten at 8.30pm had 829,000 nationally, which tells us the NRL is going to struggle this year to add viewers. Ten’s Eyewitness News at 5 to 6pm has fallen into something of a hole this week – -last night’s 375,000 viewers in the five metro markets was low, even for a Thursday evenings.

A move up from AFL for Seven’s Perth footy commentator Basil Zempilas as he starts at Weekend Sunrise this weekend. Seven says that from Saturday, he replaces Andrew O’Keefe as co-host alongside Monique Wright. Meanwhile America’s ABC network has some good news for struggling Seven — ABC has just given an early “yes” to a second series of The Good Doctor.

Nine axes the NRL Footy Show after ratings crash. Will the AFL be next?

Is it time for Nine to put the AFL and NRL Footy Shows out of their misery?

“What reputable Australian journalist or media organization, (*cough* hello, ABC who is funded by taxpayers *cough*) would stand with ‘journalists’ who have been proven guilty of making up rubbish stories and printing them knowing they are fake, all in the name of corporate greed.”

Well, when the Gillard government wanted to do something holding media organisations accountable for printing stuff they know is fake, all the big media organisations colluded to trash the hell out of them for it, so we already kind of knew that. It lowered my respect for a lot of journalists a great deal – if you’re willing to stand up for propaganda, you’re no better than the propagandists in my book.