IWD cringefests ... Xenophon loves the art not the artist ... the political party connections of a teensy local paper ...

International cringefest day. Ah, International Women’s Day, a chance to recognise the amazing progress already brought about by women around the world, and to identify and rail against the many maddening areas in which no progress has been made at all. A chance for companies that otherwise feed off and reinforce unhealthy ideas of what it is to be a woman to share a Beyonce quote and make their banner pink — you know, the way ladies like. Please set your mouth to wince and your toes to curl as we share our favourite International Women’s Day cringefests:

1. One tipster got in contact to tell us she was asked to speak at corporate sponsored International Women’s Day event that was unpaid, and offered no childcare. Perfect.

2. The University of Western Australia alumi podcast put together a interview for IWD about inspiring women with … the photo that comes with the frame? 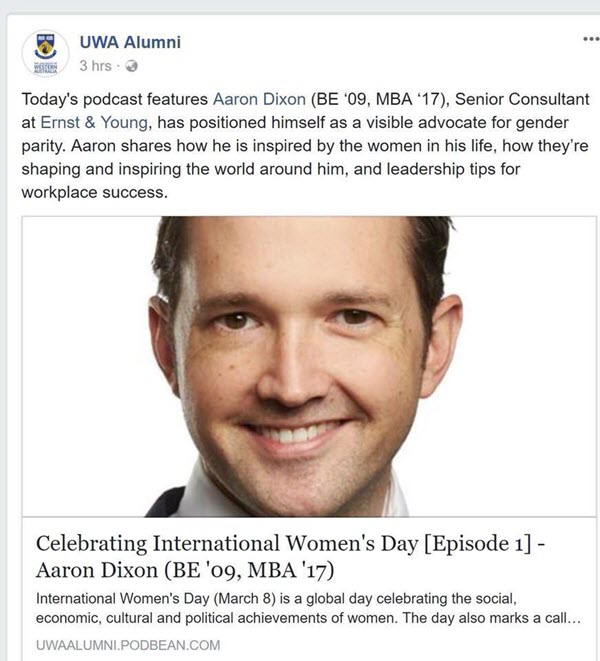 (The alumni were, to their credit, able to find two whole women to feature in the next two episodes).

3. Awesome hipster brewery Brewdog launched a pink IPA (in place of their usual Punk IPA) aimed at redressing pay inequality (dedicating 20% of their sales revenue to various inequality causes), promoted with an advert that manages to encapsulate the heady rush of gorgeous youth by being painfully earnest and mirthlessly ironic at the same time — something they had to clarify after facing an immediate backlash. 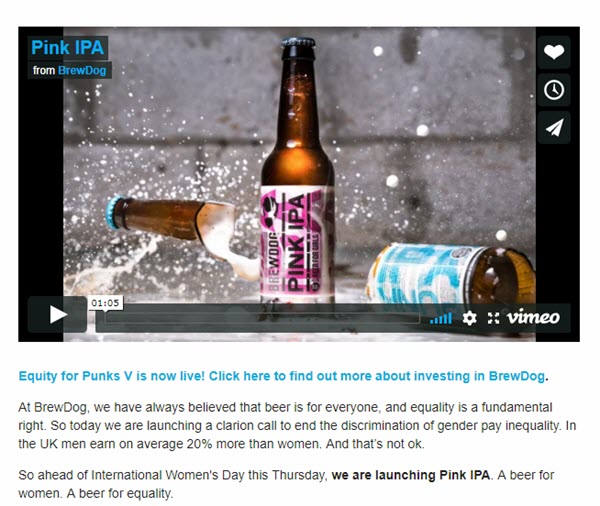 We’ll file this one under “well intentioned, but poorly executed”.

4. Of course they are not the only company to attach their brand to the day — a McDonalds restaurant in California flipped their arches to make a W, and Johnnie Walker became Jane for an entire month. Meaningful reforms, I think we can all agree.

5. And finally, a gift that keeps on taking, in three parts: after an Oxford political theorist took a poignant photo of a female cleaner scrubbing “Happy international women’s day” from the steps of a building at Oxford university (apparently at the behest of security), she was asked by ongoing atheist validator the Mail Online whether they could use the image. 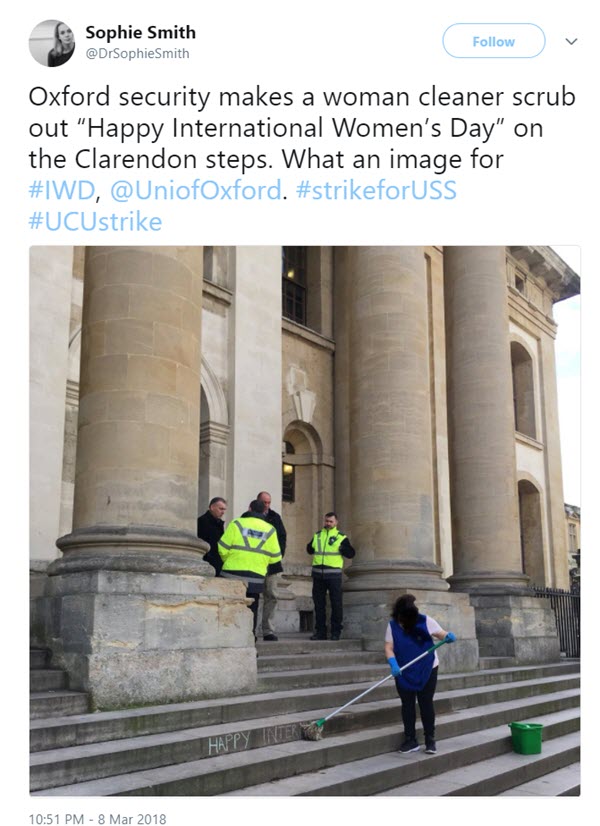 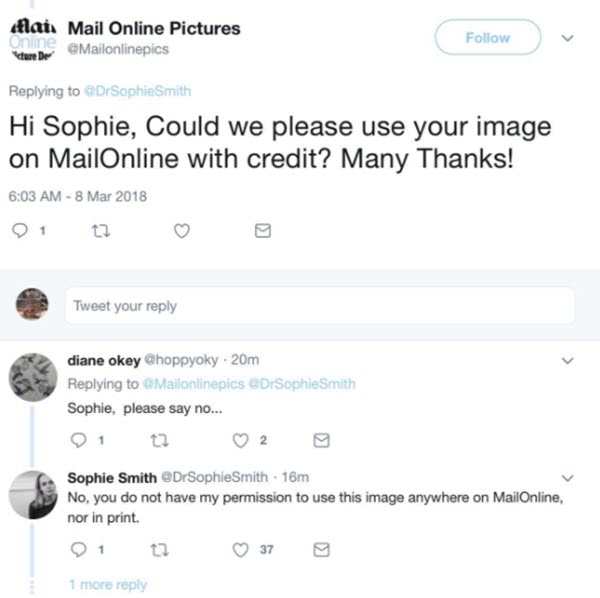 They ignored her and ran it anyway. 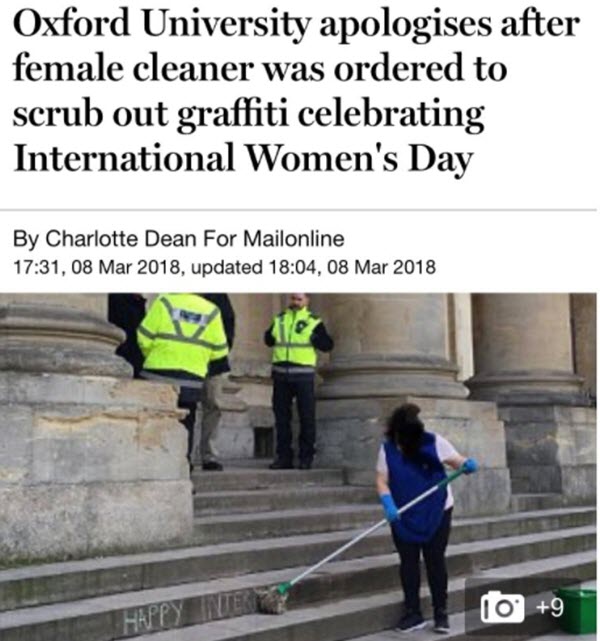 Seen anything else that really sums up the worst impulses around IWD? Let us know.

Fringe politics. In other news, the highly unpredictable South Australian election has gotten a blast of glamour with Advertiser Journo Matt Gilbertson using his fringe festival cabaret alter ego, Hans, to do a 20 questions style interview with party leaders.

As ever, attention magnet Nick Xenophon’s interview contains a few note worthy moments — Xenophon’s incredible inabilty to conjure a single fringe show he’s ever seen. He says Annie Hall is the one film one must see and yet, when he asked the obligatory question about who would be your ideal dinner guests, Xenophon first says he doesn’t know, and then as Hans is asking the next questions he says something like “well, I used to like Woody Allen until he married his step daughter”. 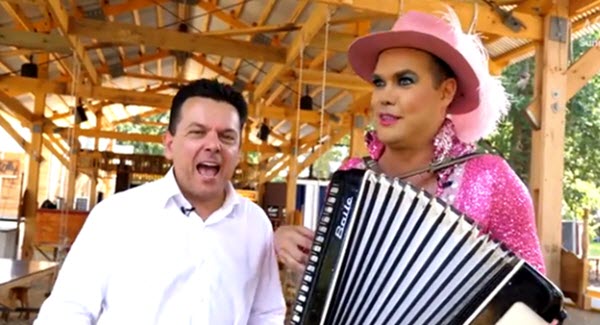 After a lot of talk of KFC and dates, he would not marry nor snog Jacqui Lambie, and the whole thing is rounded out by a stirring accordion-based rendition of the SA Best ad jingle. You can watch the lot of them here.

All in the family. Staying in South Australia, Liberal candidate for the seat of Narungga, Fraser Ellis gets a decent run in the local paper, The Yorke Peninsula Country Times. According to a tipster, “each week there are pics of young Fraser handing out trophies to almost every sporting club — from the under 10s netball to the seniors bowls teams — anywhere on the peninsula”.

Well, young Fraser just happens to be the son of The Yorke‘s proprietor Michael Ellis — indeed, each week he prints a disclaimer in eight point type on the bottom of page two informing all readers of young Fraser’s link to the owner and publisher. Hell, young Ellis has even written for the old man’s paper for quite some time.

Our tipster mentions this paper has a history of connections to the Liberal party. According to them, editor Amie Brokenshire is the daughter of Robert Brokenshire, the deputy leader of the Australian Conservatives, once Family First and, before that, Minister for Police in the short-lived Liberal government under John Olsen.

The best way to celebrate International Women’s Day would be to give the female workers the day off (fully paid) and have their male colleagues do the jobs the women do, at 40% less than the men usually get paid. Might give some of them a bit of insight.

10+.
I’d especially love to see them doing the fun jobs that make this society run.
Not so keen on living with the results for even 24 hours.

In other words, the reverse of ABC radio giving men the day off (still getting paid) and making women do all the work to celebrate, in a rare moment which managed to piss off feminists and Andrew Bolt at the same time for different reasons.

An Oxford political theorist? You mean a student then. Someone who doesn’t want to be named obviously. Your grammar is cringeworthy, I’ll say that. And thanks for jumping on the bandwagon and smearing Xenophon. Pathetic stuff.