The ABC has bumped its male talent off air for International Women's Day. Plus other media tidbits of the day.

Women get on-air roles for ABC’s International Women’s Day. The ABC has pushed most men off-air again for International Women’s Day today. Repeating last year’s stunt, most on-air presenters will be women across programming on the ABC’s radio and TV networks. Male presenters still have to go to work, but not on-air. In a statement, the ABC said last year’s effort was well-received. But it’s more than the metro newspapers could muster for their front pages — Sydney’s Daily Telegraph, The West Australian and The Australian Financial Review were the only papers with a woman’s solo byline on the front-page story today (The Australian had two women, with a shared byline, out of eight bylines on the front page).

Desperate Seven’s new show. Seven’s desperation is starting to show, as the much-hyped Australian Spartan has sunk without a trace, ignored by viewers. Now the network has grabbed a Shine Endemol format that aired on the BBC earlier this year called All Together Now. It rated OK — 3.5 million viewers to start with and finished on Saturday night with 3.7 million — but it didn’t beat The Voice, Pointless Celebrities or Ant and Dec’s Saturday Night Takeaway. But here’s how a Guardian reviewer rated All Together Now:

Quite possibly the most half-arsed talent show of all time, All Together Now is an illustration of how, even when the barrel has been scraped clean, commissioning editors remain resolute in their belief that we will watch any old bollocks just as long as they throw in a Spice Girl.

This, naturally, is a show with a ‘twist’. So rather than having contestants perform in front of the usual hatchet-faced judging panel, our wannabes are required to strut their stuff in front of ‘The 100’: a throng of ‘experts’, among them cruise-ship entertainers, West End performers, pub singers, wedding crooners, session musicians and tribute artists, all arranged vertically like the Galactic Senate in Star Wars. It is, to put it charitably, the hopeful leading the hopeless.

Department of Corrections. The Sydney Morning Herald found itself in an unfortunate position today, having to correct not one, but two of its front-page stories from yesterday: 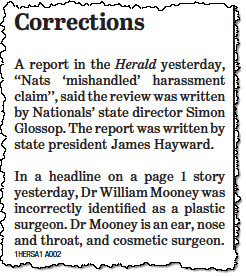 Press Council finds breach in suicide story. A detailed account of a man’s suicide attempt in the Southern Free Times, based in Warwick, Queensland, breached one of the Australian Press Council provisions but has been cleared of others, the council has found. The report, published in March last year, didn’t mention the man’s name, but it did include his workplace and other details that his family, who made the complaint, felt would identify him. The council found that while reporting on suicide could be in the public interest, the paper did not give enough consideration to the fact that the man’s family had asked they not run the story.

Outrightly outrageous behaviour demonstrated on ABC, and one wonders why discrimination still exist in society. If it was the other way around wonder what would have been the reaction, as I didn’t observe same policy applied on International Men’s day. Moreover, it is government subsidised network. Today, the only one in the year, will not be watching ABC due to appalling hypocritical behaviour.

ABC “Revenge Day”? Doing the things they condemn men for doing?
Imagine what would happen in the event of an all male panel on The Dum, or Q&A? A mirror of the cases when there have been all women?

I recall a sublime moment, possibly back in the 90s, when an Australian Democrat (sic!) brought to the attention of the Senate Acting President that every person in red leather surrounds on that drowsy afternoon session, the staff, the Senators, perhaps even Press – though as the Fourth Estate they may not be referenced – were of the distaff persuasion.
Warm daze.

“as the much-hyped Australian Spartan has sunk without a trace, ignored by viewers” – What’s the success rate for shows which Channel 7 overhypes relentlessly for months before they debut, especially with ads which are not only in every ad break in the tennis but also in voiceovers and crawls along the bottom of the screen during the tennis (and this year in the winter Olympics)? Can’t be very good.

Perhaps Channel 7 should give some thought to the fact that they are wearing their audience out on shows which haven’t aired a single episode; it feels like you’ve seen 20 hours of the show already, no need to ever watch it even if at first you might have been intrigued.

Outrightly outrageous behaviour demonstrated on ABC, and one wonders why discrimination still exist in society. If it was the other way around wonder what would have been the reaction, as I didn’t observe same policy applied on International Men’s day. Moreover, it is government subsidised network. Today, the only one in the year, will not be watching ABC due to appalling hypocritical behaviour.

Haha…. How’s it feel being a special interest/ needs group women ??
ABC on a winner here, lots of kudos for discrimination