Sacred Cows is a new series dedicated to overrated cultural artefacts and the more deserving ones we’ve lost sight of in their shadows. Each installment will pose an argument for one or the other, re-evaluating the worth of a text and the praise it has (or hasn’t) received.

There’s nothing quite so virtuous in Australian literature as the naifs and curmudgeons who spring from provincial Australia. Tim Winton’s Cloudstreet — a book centred around the tribulations of two struggling Australian families who co-habit a decrepit house in suburban Perth from 1943-1963 — is a cultural extension of Australia’s institutional love affair with the world outside of Australian cities.

The Australian city — a sus inner-suburban ring of decay and debauchery, once occupied by a combative white and ethnic working-class, and now by “craft beer wankers” — is the0 place where big moral pollution hovers, threatening to contaminate the suburbs beyond its borders.

The characters on whom Winton’s novel claustrophobically focuses are the Pickles, who emanate from the bucolic fishing town of Geraldton, and the Lambs, who arrive in Cloud Street after failing to make a fist of farming. And, while they’re brought into a suburb in Perth, Cloudstreet is no urban novel. The city to the extent it functions in the novel does so as a sort of rapacious backdrop, a sink of doom and diminished values. It’s a place Mark Latham watches suspiciously through his culture binoculars.

Cloudstreet is a communitarian project that focuses on the redemptive power of home-spun homilies, truisms and eternal forgiveness. It’s a paean to the truncated world of timeless institutions; the family, the Bible, the ALP, and cuckolding. It’s also a book of preposterous mythological wetness, and its story potential is boxed in by a checklist of thematic touchstones, archetypes and sugary colloquialisms.

And this is still where we find ourselves in Australian literature today, all too often looking past the mirror of contemporary urban society and through some rustic window, searching for some wistful core that is meant to represent the “real” Australian experience. A cursory glance at prescribed novels for VCE or ESL courses is replete with Australia’s geographic obsession for life outside the city, despite the fact Australia is one of the most urbanised nations on earth.

The motivations are partly bureaucratic, political, and commercial, but clearly there’s a cultural obsession at play. American literature explores the American soul through the salesman — the great loser floating down the American river — we continue to explore, incomprehensibly, the Australian psyche through the bushman.

A book demands drama and Winton delivers it — an eating disorder, a dissolute mother, a gambling father, a tragic accident — but Winton’s thematic peccadilloes mean he doesn’t seem to recognise that the cloistered world of these families is the problem. Stop me if I’m wrong but Cloud Street is the wellspring of every character’s misery in this book. It’s a macabre house of hokey horrors.

But my major issue with the novel is its fey language, its bowdlerised representation of Australian culture, its grasping allusions and overwrought metaphors. Water serves as a constant reference point in the book which is fitting because Cloudstreet is dripping with wet language. Characters are constantly chiacking, skylarking, saying “whacko”, “bonzer”, “flamin”, “cripes”, “buggerizin”, “dinkum” and so on. When we first meet Fish, he’s apparently well thought of about town for lighting paper bags with turds inside: the neighbours — presumably with shit on their heels — proclaim “it’s just Fish Lamb and his fun”. Two pages later Fish has his accident and we’re supposed to be tits deep in pathos. Unfortunately, a lot of the emotional developments don’t feel earned but chalked out.

I’ll admit this is a bit of a user-end problem; I’m a booster for contemporary, urbane and urban-based stories, like those of Christos Tsiolkas, but live in a world where kitsch nostalgia casts a long shadow over the Australian cultural landscape. Where’s the healthy morbidity? Stranded in the moral pestholes of the city no doubt. 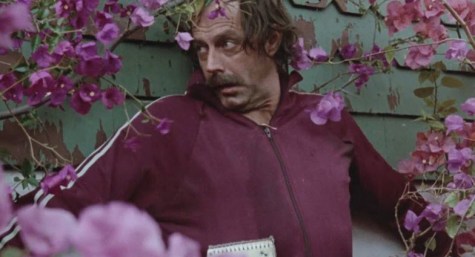 Total agreement-I thought it was just me who thought this unthinking canonisation of anyone from the so called bush was not only silly but not really believable. Books where virtually everyone is either weird, harbouring big secrets and major personality defects or get themselves into totally unlikely scrapes ( the best example has to the vastly stupid World According to Garp) cannot be taken seriously. I think the youth of the author played some part in Cloudstreets elevation but at the end of the day actual content has to be considered the same as any other novel. Cloudstreet is more silly than affecting, very unworldly even to being gauche, leaves no lasting impression, provided little original thought and is really I’m sorry to say forgettable. My favourite Australian author remains Henry Lawson and I am yet to see bettered, although I know it is only a short story, the Drovers Wife for perfection of actual writing about the “bush”.

While there’s ample room to criticise Cloudstreet we instead get this list of counter-cliches. Topped off by naming the equally, if not more, pedestrian Tsiolkas as a fitting goal of our adoration.

If this series continues Crikey, I hope we’ll get better than this intellectually sparse, self-satisfied inner-Melbourne slapdash.

old greybearded one
Reply to  Bob the builder

I am not going to be as nasty to Tsiolkas, but otherwise, Yep.

Bob the builder
Reply to  old greybearded one

Yes, that was a bit unfair. What I meant was I think they are writers of a similar calibre, with Tsiolkas slightly behind.

Norm
Reply to  Bob the builder

I’m willing to be as nasty to Tsiolkas. Though I was as disinclined to read this article (skimmed it) as either of the authors.

Plenty of worse novels than Cloudstreet, especially some of the rubbish I read in High School. Personally, I much prefer “Breathe”. However, a few of you urban hipsters need to remember that the other world is still there. As to the “Drover’s Wife”, yep a great yarn and “Past Carin'” is a great poem. Not everything Henry wrote is great though and Tim Winton has other stories, which are great, and capture a kind of person that is there in reality. Patterson wrote of a life from high in the saddle, Henry wrote from down in the gutter. I knew people like the drover’s wife when I was young.

Yes, yes, yes – except for liking Tsiokas! I’ve always felt somewhat out of the loop, or perhaps looking to be a little too much of a try hard – but I’ve NEVER liked Winton’s work. Grumpy, damaged, dark blokes who find life difficult – not an unusual premise for a novel, but I feel manipulated by the plots instead of being immersed in them. As for rural quirkiness – ergghh – spare me the cliches. Winton as an activist and essayist is a different person though, and I admire that work immensely.

Cloudstreet is a novel that brought me around to enjoying Australian fiction. For that it’s noteworthy in my library. I’m not sure I read much in this article to convince me it’s unworthy.