How the rich weaponised NIMBYism to wage class war

The Grattan Institute report on housing released today illustrates how, when it comes to housing, Australia’s middle- and higher-income earners have successfully waged economic war on the young and low-income earners over the last 40 years. 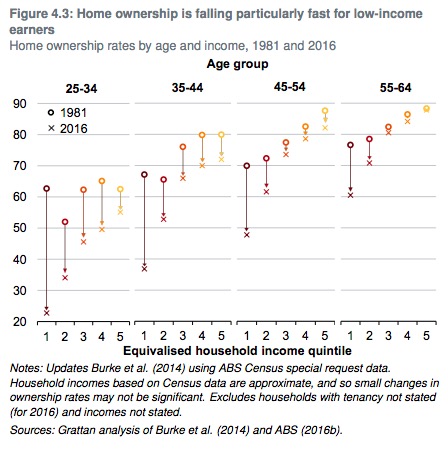 Despite Scott Morrison bizarrely trying to insist the report is some sort of vindication of the government, the very first recommendation from the report is “The Commonwealth Government should limit negative gearing and reduce the capital gains tax discount”. The report finds that not merely did the Howard government’s 1999 capital gains tax changes significantly encourage property investment, but that it has particularly harmed low-income earners because investment has been channelled into low-value homes.

It’s not merely the way our tax system subsidises property investors to compete with low-income and young housing buyers, of course. The report identifies a range of well-known factors. The report praises immigration as economically beneficial overall to Australia, but argues state governments have failed to plan for it effectively, leading to additional pressure on housing. And perversely, we have a tax and welfare system that discourages downsizing and rewards seniors for hanging onto property they no longer need.

But the biggest problem is in housing supply. Across Australia, the supply of new housing fell away in the 2000s, and only recovered in the current housing construction boom — though we’re still not back to where we were in 2003, nationally. In this regard, the New South Wales Labor Party — supposedly a party dedicated to looking after workers’ interests, but more famous for its blatant corruption — should be singled out for stunning negligence. New housing supply fell off a cliff under Bob Carr and only began recovering at the end of the Labor years under Kristina Keneally, likely helped by the Rudd government’s social housing stimulus package. Yet more evidence that NSW Labor shouldn’t be allowed near power in Australia’s largest state for many years to come. 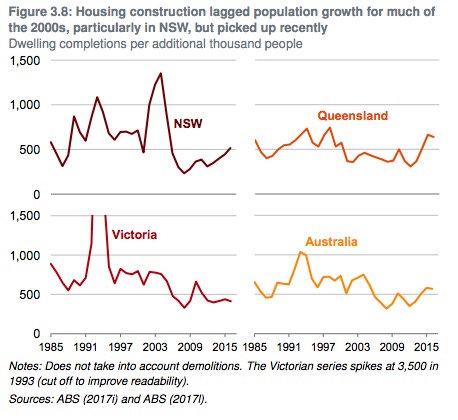 But high- and middle-income earners don’t just have the tax system on their side against low-income earners, they’ve weaponised NIMBYism to prevent greater housing supply being added to the crucial “middle ring” of cities, where there’s already strong infrastructure links and economic activity, locking low-income earners and younger people out. As the report says:

Most people in the established middle suburbs already own their house. Most of them don’t like new developments in their neighbourhoods – the NIMBY syndrome. And so most people in Sydney believe that additional population should be housed primarily outside the existing Sydney boundaries.

NIMBYism — and local councils that pander to it — in turn makes housing in those suburbs even more expensive, another win for middle and high-income earners. This problem is improving a little, the report finds, but “Australian cities still have relatively little medium density development in their extensive middle rings”.

Middle- and high-income earners in established suburbs have a strong ally in their NIMBYism in the media. Fairfax publications in Sydney and Melbourne, in particular, love to exploit all sides of the housing debate: lamenting the state of housing affordability for young people and low-income earners while Domain generates big profits from the metropolitan real estate market. Meantime its journalists relentlessly push an anti-development line that attacks new infrastructure projects and housing development that might offend residents in established suburbs.

This is a class war, in which people on high and middle incomes have used a skewed tax system and NIMBYism to enrich themselves at the expense of low-income earners and young people. The economic dislocation of preventing people in entire job categories from living anywhere near where they work because they can’t afford housing, the congested infrastructure as they travel an hour to get to their jobs, the lack of workers to provide core services where they are needed, is the price we’re all paying for this victory. That low-income earners and young people now face stagnant or falling wages to fund ever more expensive housing merely adds to toxic economic outcome we’ve manufactured for ourselves.