Lindsay Murdoch retires. Fairfax’s long-time South East Asia correspondent Lindsay Murdoch has retired after 40 years with The Age and Fairfax Media. Murdoch worked as a police reporter at The Age when he started his career as a journalist in the 1970s, and worked on the paper’s investigation team before he was first posted as foreign correspondent to Singapore in 1989. The Sydney Morning Herald and The Age on Saturday paid a generous tribute to Murdoch’s career with double-page spreads in their papers. 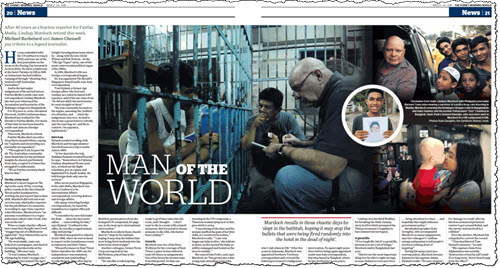 The revolving door. Australian magazine industry veteran Jackie Frank has left Pacific Magazines, where she’s worked for more than 23 years. Frank announced her departure on Instagram on Friday, saying she’d be taking on new challenges: “My passion for creating engaging content and working to build strong brands remains undiminished! It’s time to take on new challenges outside the organisation,” she posted.

Frank was the first editor of Marie Claire Australia, and became Pac Mags’ group publisher of fashion and health titles in 2014.

Front page of the day. Tasmania’s archaic electoral laws, banning newspapers from publishing stories about the poll or candidates on election day was subject of the Hobart Mercury‘s front page on Saturday, as the state went to the polls. 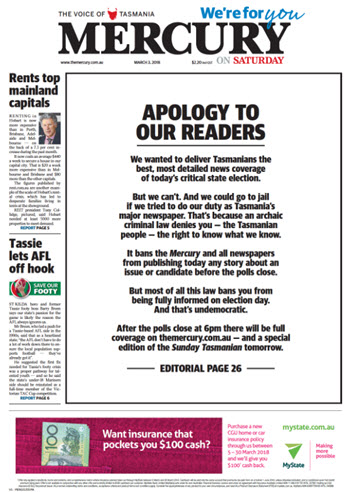 New Statesman puts up paywall. Britain’s New Statesman will start charging readers for online access after launching a metered paywall. The move follows similar strategies pursued by The Daily Telegraph, The Spectator, Financial Times and The Economist in the UK and The New York Times and Washington Post among a host of US papers and magazines. The NYT has cut back the number of free articles and News Corp papers like The Australian have gone for no freebies and a high paywall.

Later this month, readers will be required to register with an email address after reading three articles a week. After five articles, they’ll need to subscribe for an annual fee of £144 (US$200). Digital-only subscriptions will be £120 a year. –– Glenn Dyer

Amazon picks up more sports. Amazon is moving further into sports TV programming. After broadcasting NFL games last year in the US and picking up tennis in the UK, Amazon is now dipping its toe in pay-per-view sports programming and it will not be limited to Amazon Prime members. From tomorrow in the US, Amazon will be offering pay-per-view showings of Ultimate Fighting Championship (UFC) contests.

Potential customers won’t need a cable subscription or even an Amazon Prime membership to pay their US$64.99 to watch the fight by means of a Fire TV or Fire TV Stick. It can be watched via any streaming media player, smart TV, or Blu-Ray player, a game console or Fire Tablet, or any Apple iOS or Android mobile device. US media analysts say Amazon will take between 30% and 40% of the fee.

Amazon’s first try at a pay-per-view offering follows its first-ever NFL broadcasts last year. Amazon is in the running for next season’s Thursday night NFL package as well. US analysts say this move should alarm cable companies (like Comcast).  — Glenn Dyer

Glenn Dyer’s TV Ratings. Nine’s night, Nine’s week, good night, see you all next Sunday. Nine’s main channel audience in the metros had a share of 26.9%, which was more than Seven’s total people share of 25.9%. Australian Spartan flopped — it lost 27% of its opening audience of 1.21 million (nationally) to average 870,000 last night. The cost of the production can’t be supported by rating figures that low.

Married grabbed its biggest audience so far — 2.12 million nationally and 1.53 million in the metros. Its regional audience of 587,000 topped the night as well. That was all Nine needed to win, plus solid support from Nine News (1.34 million including the NBN regional news. It was just 51,000 behind the normally dominant Sunday night editions of Seven News) and 60 Minutes (1.14 million). The elimination segment of  I’m A Celebrity on Ten averaged 905,000 and still beat Australian Spartan, which tells you how far Spartan slumped last night.