The ABC's head of editorial policies Alan Sunderland has tried to calm staff discontent over recent editorial missteps with an internal email and video today assuring them it's business as usual at the national broadcaster.

The ABC’s head of editorial policies Alan Sunderland has tried to calm staff discontent over recent editorial missteps with an internal email and video today assuring them it’s business as usual at the national broadcaster. Staff have been increasingly disgruntled by the way the ABC has handled the debacle over Emma Alberici’s corporate tax piece and the cabinet files. And Sunderland and managing director Michelle Guthrie’s efforts at Senate estimates earlier this week did nothing to settle the feeling that Alberici was hung out to dry by management, or that the ABC had pandered to political pressure when it pulled her work down from the website.

And it’s hard to see how this effort will do much to win over skeptical and frustrated staff.

In the three-minute video, which the ABC has published on its website, Sunderland sits behind a desk and says the ABC has never buckled to pressure, and it wouldn’t now. He says the ABC isn’t pulling its head in and should continue to observe, report, question and analyse, and question and challenge those in power. 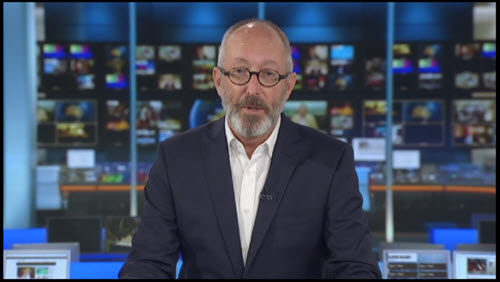 In the email he sent with the video, Sunderland says he decided to create and share the video in response to “comments in some quarters that the ABC was bowing to government pressure”.

“We often find ourselves caught in a difficult balancing act between defending our work and our staff, acknowledging our mistakes when we make them, and fighting off claims that we are either biased in our attacks on the government of kowtowing to that same government. That all goes with the territory when you are the most accountable media organisation in Australia. But sometimes it’s good to remind ourselves of the basics.”

Management are still to publicly back chief economics correspondent Emma Alberici, or to list the errors found in her work (even when asked to at estimates). The debacle comes just weeks after the blundering over the so-called cabinet files, where the ABC pandered to the government in handing back the documents obtained, and then apologising to Kevin Rudd for one of the resulting stories.

Where’s an image meme of the Iraqi information minister when you need it?

The metaphorical Baghdad is burning in the background behind Sunderland and Guthrie, yet they think bare denials anything is wrong will satisfy people.

Tip-off to Alan Sunderland: whether you change the editorial ethos or don’t change it at this ‘sensitive time’, the ABC budget is guaranteed to be shafted by the Turnbull government. What will Aunty risk by being bold?

Beyond parody.
I thought both his & Guthrie’s performance at Senate estimates was appalling.
I obviously underestimated just how bad it could get.

the Rupert Murdoching of the ABC is now complete, the black prince `s hacks are now dismantling the once proudly independent public broadcaster and gagging any criticism of this totally disfunctional shambles of a government, they say Murdoch is now bedridden, lets pray its serious because this world will be a much better place without him.

I was waiting for the trapdoor or hook to end the misery of having to watch this codger.

Let me address the elephant in the room… by stepping over it and telling you right now, that despite all the appearance that the ABC has caved to the government and the consensus of the same in respected journalistic circles, let me assure you, we have not.

{off camera} I think that worked – this journalism is easy. Give it an hour and I call the PM and see whether he liked my statement.

“telling you right now, that despite all the appearance that the ABC has caved to the government and the consensus of the same in respected journalistic circles, let me assure you, we have not.”

That is the point at which John Cleese would walk in and announce “And now for something completely different …” (or a 16-ton weight would squish the pompous speaker thru the floorboards).