Clive Hamilton book cover gets its own mini-controversy

The cover of last week's Saturday Age Insight section took more than a little inspiration from a book designer's work, the paper has admitted.

The Saturday Age has admitted an illustration used for its excerpt of Clive Hamilton’s controversial new book should have acknowledged the artist who designed the book’s cover.

Last weekend The Age‘s Insight section ran an excerpt from Silent Invasion, which was also the subject of the section’s cover image. And that image was remarkably similar to the book’s cover (which was also reproduced inside the section, alongside the excerpt). 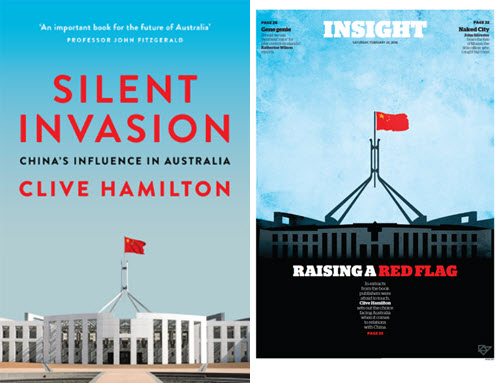 The book’s designer Peter Long told Crikey that while he was glad the book was getting the publicity, he’d been shocked to see the paper use his idea without an acknowledgement.

“I’m pleased the book’s getting some attention, but the idea has been reproduced and signed by an Age artist and that feels wrong,” he said. “I just wanted them to acknowledge and recognise that they shouldn’t adapt people work without acknowledging the original.”

After Crikey contacted Fairfax about the similarity this week, a spokesman for The Saturday Age said the image was, in fact, inspired by the book’s cover.

“On reflection we should have acknowledged his original work. It certainly was never our intention to infringe anyone’s copyright,” he said. “It has been standard practice over many years to use illustrations for Insight’s covers … We wouldn’t run an actual book cover for our section’s cover, but we did include that image alongside the text, so our cover’s inspiration was plain to see.”

The copyright is owned by the publisher, Hardie Grant, who told Crikey they did not believe copyright to have been breached.

Long is a freelance designer who is on the committee of the Australian Book Designers Association, which is currently surveying members about their copyright and work practices.

“Usually I’d just grumble and not say anything and suck it up, but in this instance I felt like because I’m on the committee of ABDA and we’re talking about these things at the moment I thought it was important to raise it,” he said.

Hamilton’s book, about Chinese influence in Australia, was knocked back by several publishers before Hardie Grant picked it up. He made headlines last year after claiming Allen and Unwin had told him the Chinese government had threatened legal action over the book.

What does it take to be a Sydney Institute expert?