News.com.au is claiming that it was censored after a ruling by the Classification Board found that one of its articles "directly or indirectly" advocated terrorist acts. And other media tidbits of the day.

ISIS article ‘censored’. News Corp’s free website news.com.au has criticised a Classification Board ruling that one of its articles “directly or indirectly” advocated terrorist acts, despite the Australian Press Council finding that the article was in the public interest. The article was published in May last year, describing an ISIS “guide” to lure victims. News.com.au’s editor-in-chief Kate de Brito said:

This is a deeply concerning development of media censorship. The Classification Board has silenced the reporting of a legitimate threat to the Australian public. Australians have a right to know if their safety or lives are being placed at risk — there can be few more important matters of public interest. The secretive way the Classifications Board acted in this way is a direct attack on freedom of the press and journalists should condemn it.

In its story about the article, news.com.au reported that the article in question was taken down because the site faced action from the Australian Communications and Media Authority if it did not.

Canadian government’s plan for news sector. The Canadian government has shied away from taxing Google, Facebook and other digital groups that are draining revenue from the country’s fragile media. Instead, the government has proposed a piddly CA$50 million payment over the next five years to support news in under-served areas of the country. More substantive aid ideas have been flicked into the future via the “further study” excuse.

That is a long way short of annual CA$350 million in aid News Media Canada proposed last June. This journalism fund would have allowed the government to partly subsidise newspapers and individual journalists at publications providing civic or local news. The fund was meant to support news coverage in thousands of communities that aren’t reached even by the CBC (Canada’s public broadcaster). It proposed paying for it by either diverting revenue from the auction of the wireless spectrum, and extending the tax deductions for ad spending to online ads purchased from Canadian platforms. — Glenn Dyer 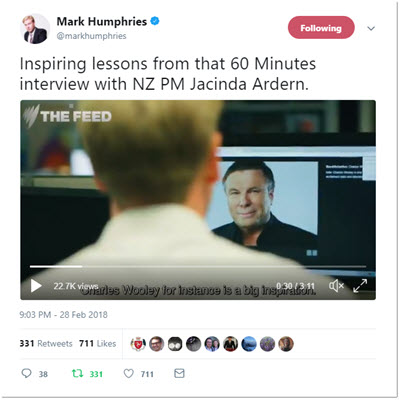 ITV pulls ahead with non-advertising revenue. UK commercial TV operator ITV might be doing it tough (though not as tough as the Seven and Ten networks here), with falling advertising revenue and profits, but it is ahead in the one measure that analysts are starting to appreciate — new sources of revenue. The network reported its 2017 financial results overnight. Non-advertising revenue — which also includes the ITV Studios division — was £2.1 billion, up 11% and now accounts for 56% of ITV’s total group revenues. ITV’s own online, pay and interactive revenues rose 7% last year to £248 million, with double digit growth in online. Total revenues rose 2% to £3.1 billion.

What ITV calls “Family” net advertising revenue fell 5%, the biggest fall in revenues since the 9.4% slide in 2009 as the impact of the GFC hit ad spending by UK businesses. ITV Studios which includes the company’s large US division and its international production and sales operations, posted revenues of £1.6 billion, a 13% uptick on the previous year. Earnings were flat.

Pre-tax profit was down 10% at £500 million. Shares fell 7.6% after the company said that increased programming costs over the next two years (around £150 million in total), would hurt profits and returns to investors. — Glenn Dyer

Glenn Dyer’s TV ratings. Nine’s night easily as Married At First Sight (1.79 million nationally), easily accounted for MKR (1.50 million nationally). At 9pm Seven went to swimming (lead up to the Commonwealth Games coverage in April — 465,000 nationally) and Nine won well thanks to 20 to One (897,000) after Married. Celebrity on Ten averaged 859,000 as the departure lounge fills. Mad as Hell averaged 826,000 viewers for the ABC and that was the night.