Palmer’s online posts aren’t just bizarre for bizarre’s sake. They serve to rebuild his image of a potential populist leader — and they're working.

A glance at the Facebook page of former politician and business mogul Clive Palmer illustrates a world that would seem absurd and unprofessional to most. Low-res images seemingly created on Microsoft Paint. Videos espousing Clive’s love of Shrek 3. Constant references to a “dog on the grog”.

From when this initially started in early 2017 until very recently, it was waved off as the irrational actions of a political figure way past his prime. His Facebook posts have been described in the media as “bizarre“, “insane”, and even “post-modern poetry“. These asides all have a similar underlying critique: Palmer is fighting to retain his relevance in a political sphere that not only cast him out, but did so in no uncertain terms. He spent only a term in parliament, during which almost his entire party left his side.

Or so he’d want you to think. 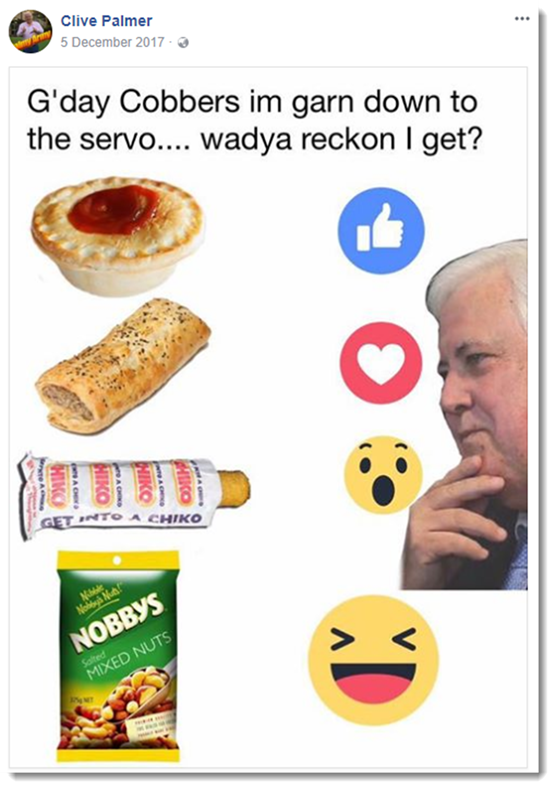 Palmer’s use of “shitposting” (the deliberate posting of low-quality, unfunny images and memes) in 2018 serves a clear purpose. Palmer and his team have been able to communicate directly to a new audience of potential voters, unburdened by his previous political failings. He is mastering the one area of Trump’s campaign few Australian conservative movements have yet to successfully tap into: memes.

There is already a precedent for using memes to assist in conservative movements. In a leaked style guide for white supremacist website Daily Stormer, a specific point was made around the idea of “Lulz” (it even gets its own subheading). They specify that their posts must be covered in irony at all times, making it virtually impossible for the casual observer to tell if they’re joking or sincere. Similarly, Oculus co-founder Palmer Luckey was caught posting on Reddit about funding efforts to win the 2016 election for Donald Trump via memes. While there’s no sign whatsoever of Palmer being affiliated with either of the aforementioned (or even that he posts the memes on his own page), his memes have recently become more political in nature. 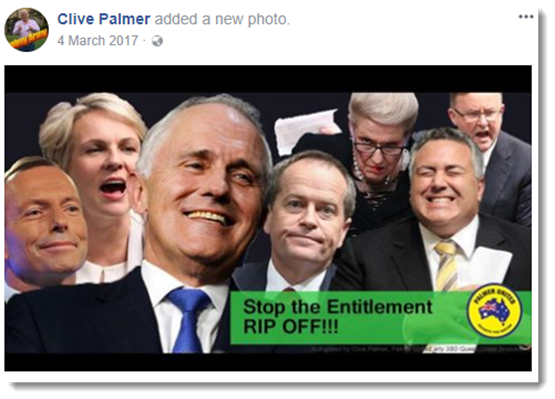 Recent offerings on the page suggest the left wing (including, but not limited to: Opposition Leader Bill Shorten, The Greens, and progressive talking heads such as The Project’s Waleed Aly) are weak, unpatriotic, or trying to turn Australia into a communist state. Left wing media, including the likes of Junkee, BuzzFeed, Vice and Pedestrian, are seen as safe spaces for those who cannot think for themselves. The ABC and SBS are mere government propaganda.

The moderate conservatism of the current government, especially of Prime Minister Malcolm Turnbull, is also a frequent target. Turnbull is characterised as a weak-willed leader who is governed by lobbyists and the mainstream media, in charge of an incompetent and mismanaged government. Or, as one meme puts it, he is the “Virgin Turnbull”, compared to the “Chad Palmer”.

Not all Palmer’s pot-shots are strictly conservative in nature: he also laments on the ongoing car-crash that is the NBN rollout, while criticising the ubiquity of Rupert Murdoch in the Australian media landscape. That said, some of his posts, whether intentionally or not, come off with undertones of something more nefarious. This post, in particular, uses anti-Semitic imagery to argue for lower taxes: 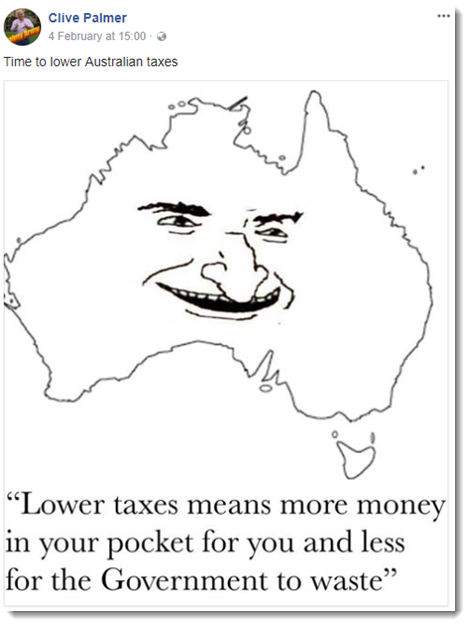 All this goes to show that Palmer’s posts aren’t just bizarre for bizarre’s sake. They serve to rebuild his image of a potential populist leader. Specifically, he is aiming at a younger audience than he was when he ran for the federal seat of Fairfax in 2013. His attention now has turned to a potential electorate of younger millennials, who may not see themselves in the ageing faces of Australia’s political conservatives, yet may also feel ostracised by the politics of progressive movements.

Not only is he speaking the language of millennials and Gen Z, he’s also actively recruiting them. As BuzzFeed reports, a private Facebook group called the “Palmy Army” was recently launched to source memes. While some of the user-generated content is reportedly racist, xenophobic and anti-Semitic, the group’s rapid growth — over 8,000 members joined in less than a week — demonstrates the type of capital Palmer has raised.

As younger generations reach voting age, memes like the ones used by Clive Palmer or Donald Trump will become more vital to political survival. Both major political parties already have dedicated “meme” pages: the Coalition’s “Innovative and Agile Memes” and the “ALP Spicy Meme Stash”. Previous methods of reaching out to the youth vote will no longer cut it; to survive politically, you need to get into meme culture.

Despite his recent announcements to re-enter politics, Palmer continues to face a variety of obstacles to returning to Canberra, including his legal woes with Queensland Nickel and his unsuccessful first run at political office. But, as the success of Trump has highlighted, memes aren’t just there for the lulz; they can very well be a strong foundation for political campaigns. Only time will tell if Palmer’s Facebook page will become the foundation for another. 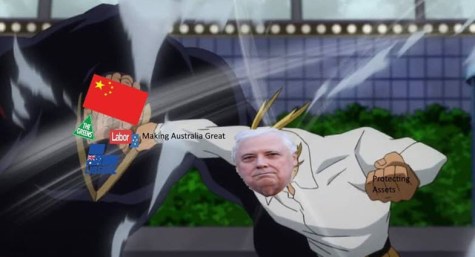 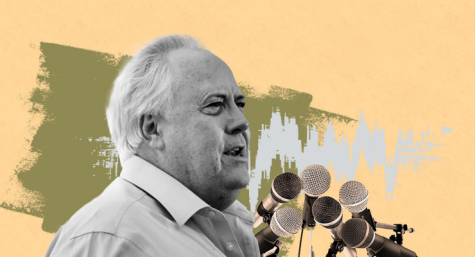 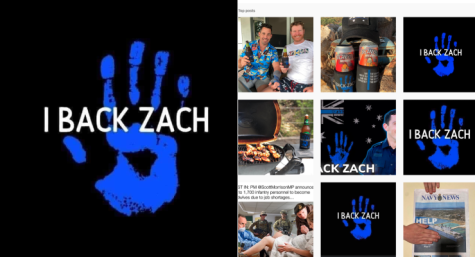 You’re reading way too much into this. He’s clearly giving some petty cash to someone to post this junk on his behalf. Knowing that he only trusts close relatives for these types of jobs you can figure out through a matter of elimination who that’s likely to be. His so-called memes are stale, and mostly originate from /pol/ & /b/ on 4Chan, dating well before the Trump campaign, even predating the inane Kek nonsense that got Hillary all confused.
He started doing it originally for the attention he craves – it slips in and out of third person – but more often lately his petty vendettas and grievances against his enemies (anyone who’s reported on his dodgy dealings, done business with him, worked for him, or been in a political relationship with him).
He’s a bitter man, hamstrung by envy of those more powerful (Murdoch, Turnbull, Newman, etc) and a pathological liar. You need look no further than to read between the lines his Twitter feed while he’s in court of failure to pay his workers to see what a monster we’re failing to bring to justice.

And lest we forget his idiot nephew, who is currently still listed as the CEO of the Palmer United Party, is on the run from the law. Heaven help Clive if he’s ever dragged back to Australia in handcuffs.

All the parties advertising is absolutely mind numbing, if one weirdly takes any notice. I doubt anyone except newbies take any notice of it. This version does initially catch your eye for a nanosecond. Probably considered tax deductible money well spent. And paid for by us.

You can’t gauge much from Clive’s Twitter responses. If you’re anything less than sycophantic towards him, his social media manager blocks you within minutes.

It’s a worrying trajectory. One of his recent memes included an image of blonde kid that was literally taken from a Hitler Youth poster. They got wise and deleted it pretty quickly.

That’s the problem with copying memes you find on 4chan and not understanding the context. They’re meant to inflame, just for the heck of it. Everyone else knew it was a spoof of Nazi propaganda. Except Clive’s Twitter kid, it appears. His only original idea is the Dog on the Grog, which might be amusing to a child if not that alcohol is a deadly poison to dogs.