Camp Cope has become a force to reckon with on issues of gender disparity and harassment, but in the midst of "shitstorms" and abuse, they argue it's time for men to fix their own mess.

Sarah Thompson, drummer of Camp Cope, knows her band is in high demand. Not just because of its well-earned popularity — this week they’re following up a critically beloved debut with an album that’s already earned a spot on triple j’s Hottest 100. But also because of their politics.

“Anything to do with gender… we’re the first call,” she says, slightly dispirited.

That’s a big responsibility to bear in the midst of what’s been described as a society-wide gender reckoning.

Camp Cope’s music has recently been coined “raw, feminist rock for the #MeToo era”, but it’s certainly not a simple response to the hashtag. Thompson, along with bandmates Georgia Maq and Kelly-Dawn Hellmrich, has been busting out electrifying, empathetic and distinctively no-bullshit songs since 2016. Though their lyrics are often rooted in everyday mundanity, they frequently also speak to big (yet similarly common) issues like victim blaming, being gaslit or undermined, and sexual assault.

The band has made headlines for their It Takes One campaign (an initiative to eradicate harassment at gigs), calling out gender disparity at Falls Festival (one of Australia’s biggest music events), and most recently ‘The Opener’. The latter, the opening track from their upcoming album, is a blistering takedown of men in the music industry who have undermined them.

“Everything in that song is a true story,” Thompson says. “The #MeToo stuff started happening around the world in the lead-up to recording, so it really made us feel a little less stressed about it. [The movement] gave us some more confidence to put that song out and think that people weren’t going to absolutely punish us for it.”

They ended up debuting the song at two-sold out shows at Australia’s most prestigious venue. “It’s a very cathartic song to play — it felt good to play it at the Sydney Opera House,” Thompson says, laughing. “It was a bit of a fuck you.”

Though they’ve earned enormous numbers of dedicated fans, the band are familiar with “punishment” too. Thompson says the Falls incident resulted in an “absolute shitstorm”. The band, while on stage, pointed out there were just nine women on the line-up, all playing off the main stage. Falls issued a response which was widely interpreted as dismissive, and online abuse rolled in.

“[We were] literally pointing out women on a timetable that is available to everyone,” Thompson says. “The amount of people who thought that was outrageous… like, there’s so much work to do. That is insane.”

The band receive dozens of critical and outright abusive messages a day, and are a regular target in triple j online comments sections.

“It gets a bit disheartening because you look down the page and it’s like, anyone who’s not a band of white men doing a safe thing is absolutely torn to shreds,” Thompson says. “Why is this happening still? I guess people need to un-learn what’s the norm. Four white men singing about their terrible ex-girlfriends isn’t the norm anymore.”

“People say ‘well, if women want to start bands, why don’t they just start them’, it’s because they start them, and then they literally get torn to shreds and stop. That’s how it works. If we were three 18-year-olds with no experience, or three people who may not be as outspoken, it’d just crush you. I can’t imagine having to deal with that if I were a solo artist. I can imagine it’d make you not want to speak out, I totally get why people don’t. You personally suffer so much for what you’re saying.” 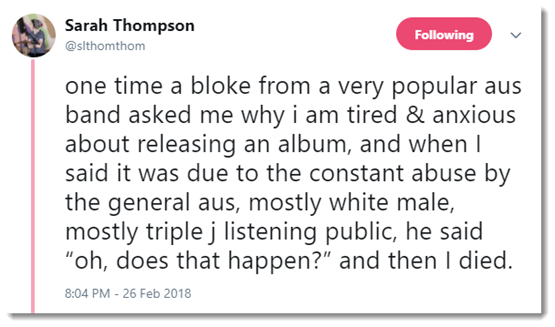 The number of women speaking out about harassment and abuse over the past few months has been a revolutionary force in Australia and beyond, but many are asking where the men are. Women are writing the songs, relaying their accounts, starting initiatives and spearheading investigations. Yesterday the ABC published a report about a secret male-only Facebook group (now defunct) in which high-profile acts in the dance scene posted often explicit image-based abuse. It existed for four years without the contents leaking, without men speaking out.

“[Men] are in the best position!” Thompson says, speaking generally about abuse and harassment in the music industry. “The silence speaks louder than anything really. It almost makes things so much worse, because no one believes people. They’re like, ‘well, they’re not saying anything’…

“Everyone knows someone who’s had something to happen to them, every band has seen something happen in the crowd. If you say you haven’t, then you’re literally walking around with your eyes closed.”

Thompson cites Dave Le’aupepe from Gang of Youths and Briggs from A.B. Original as men who have regularly stepped up, and points out that it’s often people from minority backgrounds — those who are often dealing with similar problems themselves.

“It can’t just be us speaking on our own,”she says. “Why is it up to women to fix this problem? Speak to men. Speak to men with rougher crowds, men with a more mainstream sensibility who play bigger shows. Men listen to men.”

Despite this, Camp Cope don’t resent the position they’ve found themselves in. “It was never our intention to be anything other than a band but… it’s nice to be recognised as people who are quite openly discussing it.”

She also has a bright outlook, as diverse and outspoken bands gain more exposure. A.B. Original are “doing amazing stuff every day”, she says. Melbourne four-piece RVG are “going to be the biggest band on planet Earth one of these days”. Cable Ties are “going to take over the world”. She points out the next crop is booming too with support from initiatives like Girls Rock (a program for girls, trans and non-binary youth): “These kids who are 13 or 14 are writing these songs and being confident.”

“It made me feel like the future’s going to be OK.”

Everyone has their own personal taste. I really want to like Camp Cope, they’re doing so many things right. But their music just absolutely bores me. I’m completely puzzled by how the band got so popular in the last couple of years. Same goes for RVG really. Both bands with great lyrics but the music just does absolutely nothing for me. Normally my taste is fairly closely aligned with critical consensus, but in those two cases, I find them almost painfully boring.

On the other hand, Cable Ties are just flat-out incredible! One of the best bands to come out of Melbourne in years.

I’m sure the women in this band are relieved that they’re ‘doing so many things right’. Geez, thanks, Dad!

Got a feeling they’d give zero fucks about your boredom and puzzlement. You should have left it at ‘everyone has their own taste’.

Disclaimer: This is my meta explanation. Don’t read any personal opinions about #metoo into this

Or, take some time with a woman you know and respect.

Raise a few of the issues that #Metoo is ventilating and ask her what she thinks. Ask her about her experiences when she was young, as she grew up and now.

Suspend your judgement, take your experience and your ego out of it, and listen.

Risk level: low. Value: up to you.

I get a bit sick of hearing successful women complain about how they’ve been held back by men. I am a working class male, I’ve had shit jobs all my life, live in a shit area, don’t own a home, suffer ill health, and don’t have enough super to retire on. I certainly didn’t hold them back.

I think, according to current cis theory, you did, do & will, by being.

Ever thought that the system that they are complaining about, the patriarchy, is fucking you over too?

A patriarchy (ie. the system we have…) is based on male competition. You got the rough end of the stick because other more powerful males competed (mostly with unfair advantage) and took your share. I’m talking about the men that made decisions about whether to fund your school, fund your hospital, casualise your industry. They were looking out for themselves, not you.

Maybe you’ve got more in common with these women than you realise?

The underlying assumption seems to be that all men have a common, shared and committed view about the other half of the population.

I certainly do not subscribe to an anti female view. As a father of daughters and grandfather of a grand daughter I enjoy and celebrate their achievements.

There is a risk of alienating males of good faith by attempting to portray all males as anti female. The scattergun approach, of what is increasingly an anti male campaign, will lose credibility because of its lack of objectivity. Which is a shame.