Ahead of the ABC's appearance at Senate Estimates last night, a staff email announced a reshuffle of editorial positions that head of news Gaven Morris said would clear up any confusion after the chaos around the cabinet files and Emma Alberici decisions.

Another ABC news reshuffle. Ahead of the ABC’s appearance at Senate Estimates last night, a staff email announced a reshuffle of editorial positions that head of news Gaven Morris said would clear up any confusion after the chaos around the cabinet files and Emma Alberici decisions. But Morris didn’t say why he thinks a management structure change and change of title can suddenly help it recover from the damage to the prestige and reputation of its news and current affairs division.

In the email, Morris conceded there had been “number of editorial issues” and indicated a need to improve processes, particularly with regard to the ABC’s online output. The key change is to the ABC’s “news leadership team”, with deputy director of news Craig McMurtrie getting the new role and title of executive editor, ABC News, where managing editors of digital, television, radio news and fact-check will report directly to him. John Lyons will still oversee the investigative and in-depth journalism unit. — Glenn Dyer

Good feud guide. Among The Australian‘s many, many, many pieces criticising the ABC over the Emma Alberici article schemozzle, was Nick Cater yesterday. The op-ed from the Menzies Centre executive director compared the ABC to Netflix in arguing that the broadcaster had lost its authority, including the assertion that “Alberici has ­irrevocably lost the authority that should attach to her position by aligning herself with the economic equivalent of the anti-vaccination movement.”

The ABC didn’t expressly take issue with the anti-vaxxer comparison, but issued a response to challenge the comparison with Netflix: Cater argued that four out of 10 Australian homes have a Netflix subscription, while the ABC only gets 10% of metro TV audience share on any given night. In its statement, the ABC said the comparisons were flawed and if audience reach was used instead, ABC TV on average reached 25% of the metro population each day. “If Mr Cater had asked the ABC for a comment we would have been happy to provide the correct data and help him avoid the errors in his report today,” the statement said.

NY Times v everyone else. And in other media feuds, The New York Times‘ Australian bureau chief Damien Cave is continuing to rile up journalists from local outlets. Yesterday Cave posted on the NY Times‘ local Facebook group for subscribers, comparing local coverage of China to that in his publication. 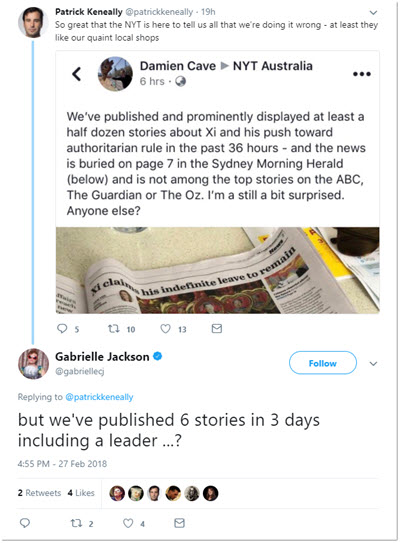 The discussion is a little more nuanced in the Facebook post itself, but it’s not the first time Cave has attracted a bit of a pile-on.

Journo reveals Tim Ferguson bullying campaign. News.com.au journalist Candace Sutton has revealed a bullying campaign against her by TV star Tim Ferguson, after a TV program review she wrote in 1990 mentioned him once. Sutton details a series of abusive and crude letters he wrote to her via fax, which she complained about but continued. Ferguson, with Paul McDermott and Richard Fidler had been part of a comedy group called the Doug Anthony Allstars. Ferguson was responsible for the letters, but all three have apologised.

If the letter was intended to be menacing, it succeeded. I would come to view faxes in my pigeon hole as unexploded hand grenades …  I felt angry, sad, dirty, humiliated, ugly and for some strange reason, guilty and ashamed. I put the letters and drawings in an envelope, a bag of little explosives should the time ever come. They faded a bit over the 28 years I have spent being reminded of Ferguson’s clever nastiness every time he made news.

Glenn Dyer’s TV Ratings.  The Good Doctor (1.44 million nationally) at 9pm lifted channel Seven to a win last night. That was after Married At First Sight averaged 1.72 million — its highest Tuesday audience of this series so far, and MKR managed 1.65 million. Both programs were the only ones to grab more a million or more metro viewers as well.

Nine would have won if it had better post-Married programs. Instead it has the appalling Date Night (650,000 nationally) and rom-com Friends With Benefits dropped into the 9.35pm slot where it averaged 330,000 viewers over the next two hours. Seven ran two eps of Grey’s Anatomy and the first averaged 429,000 national viewers and flogged what was on Nine. And that’s why Seven ended up winning the night, though Nine claimed the demos. Ten’s I’m A Celebrity (More of I’m an Afterthought so far as viewers are concerned) averaged 756,000.

Yes it is a bit surprising. So much of the SMH overseas content these days is cut and paste of the NYT and WPost same old views – Bernie, Asange, Iran, China, Russia bad Hilary, SArabia good.

From where does Cater get his facts? ….. Off a toad or out of a mushroom?

Re the ABC’s ‘editorial issues’: one editorial glitch which needs to be redressed is proof-reading of copy. Only occasionally does a story appear on the news website which doesn’t have a typo or is missing a word. The poor grammar in some reports is a far cry from the standard a couple decades ago.

This morning on ABC News Breakfast there was a report on the Emma Alberici matter before Senate Estimates. The subtitle referred to Emma Albercie – incapable of even getting a senior colleague’s name right, the colleague who was the focus of the story going to air. Later it was corrected.

If Gavin Morris is so concerned about editorial issues & content he should begin with scrutiny of the detail.

That ABC response is odd – rather than engage the fact-free slur of Alberici it nitpicked a comparison with Netflix stats.
The typical corporate response to a real problem is a reorganisation, hide the facts beneath flummery.
Pathetic – surely the coffin lid on the ABC is now mostly nails?