The many forces trying to ‘tear up’ our workplace laws

To read the news today, you'd think one organisation was gunning for IR change. The truth is more complicated.

In a big-news-story shaped hole on its front page today, The Australian has exposed the shocking truth: Bill Shorten told potty-mouthed construction industry workers in Queensland late last year that Labor planned to reform Industrial Relations laws! Or, as Simon Benson puts it:

“Bill Shorten vowed to tear up the nation’s industrial laws, which he described as a “cancer”, during a rallying speech late last year to workers at a Queensland coalmine where CFMEU protesters were revealed to have allegedly threatened to rape the children of non-striking workers.” 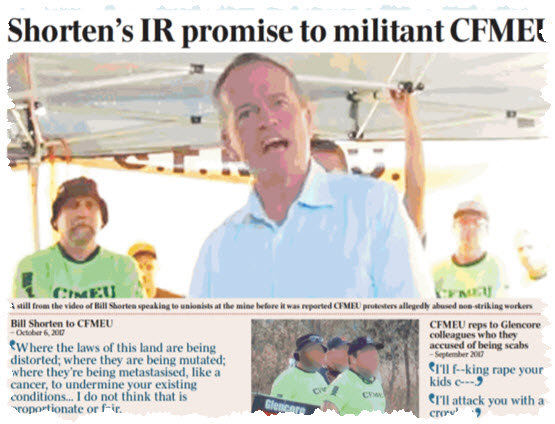 After reproducing the fairly vague quotes — “Where the laws of the land are being distorted; where they are being mutated; where they’re being metastasised, like a cancer, to undermine your existing conditions … I do not think that is proportionate or fair” — the story reminds us that individual picketers at that work site were recorded a month earlier screaming vile abuse at alleged scabs, something not publicly reported until after Shorten’s visit.

Firstly, it is remarkable that a story on the national broadsheet’s front page could contain literally no new information; Labor’s intention to reform industrial relations legislation  — particularly around the negotiating agreements, and protection of penalty rates — has been publicly on record and widely reported for many months. The fact that Shorten spoke to the Glencore workers was publicly reported when it happened, particularly after the abuse became public.

On the Oz‘s page six, there’s a similarly graceful linking — a federal court judge’s assessment of “deplorable behaviour” of the CFMEU and an attendant fine of $105,000 is jammed, sans link, onto the end of a completely unrelated story regarding a CFMEU delegate’s unfair dismissal claim.

What might have been mentioned, but wasn’t (and rarely is), is that employer groups are equally committed to “tearing up” Australia’s IR system.

Just yesterday the Australia Resources & Energy Group made a submission to the Senate Select committee on the future of work and workers committee they argue for changes far more radical and wide reaching than anything Labor have aligned themselves with: abolishing the award system and the attendant minimum wages for industries, reintroducing individual agreements and allowing employers and employees more “flexibility”. 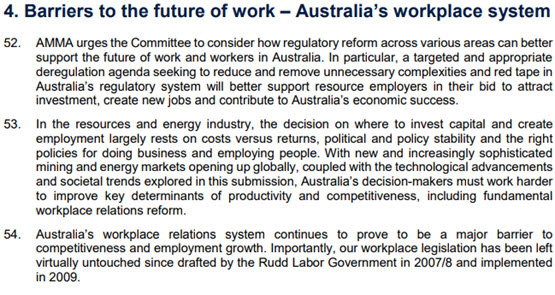 “remarkable that a story on the national broadsheet’s front page could contain literally no new information”? Seriously?

Lastly, puzzle why wages have stagnated and ponder on the casualisation of the remaining workforce.

None of these things are accidental, people.

Boy! Am I glad that I am retired.
But I have to say that a lot of the problem stems from us peasants ourselves.
In my own field it was very hard to get the members (Union membership was supposed to be compulsory) to take any interest in Union matters. Most of us were too “gentlemanly”to ask one another if we were Union members. It was almost impossible to get Members to act in their own interest at the behest of the Union. Most communication from the Union to members was passed by some crawler to the Co. almost at light speed.
90% of the members begrudged paying their union dues. The young fellows thought that things had always been this good and could only get better.
Now the realities of the system are biting.

WORKCHOICES 2.0!
Are we all just going to lay down and let this happen? For heavens sake: join your appropriate union…NOW!!

I note Murdoch’s minions called the CFMEU “militant”…… but, did they go the whole hog and add the usual “union Bosses’ and ‘thugs’?
I ask cos I didn’t and won’t get down in the muck by visiting their sites.

Economists like Ross Gittins, cautiously in recent years, acknowledge that household spending is the heart of the economy. Employers and the LNP have always argued to suppress wage growth.

Consistently denying unions any positive media coverage on their victories, arguing against wage increases, implying productivity rates reflected lazy workers rather than companies failing to invest in capital equipment, stacking industrial commissio0ns with their cronies, are the tactics of media owners, employer groups and the LNP.

IR Change? You will need a combination of a change of Govt, a lessening of greed, and culture change in LNP class based warfare. Good luck with that.