The mystery of Malcolm’s midnight missive

Malcolm Turnbull waited two weeks to check if Barnaby Joyce had broken any ministerial standards. Is anyone in his office capable of doing the basics of political management?

There’s something genuinely odd about Malcolm Turnbull’s request for Martin Parkinson to undertake an investigation of whether Barnaby Joyce breached ministerial standards. 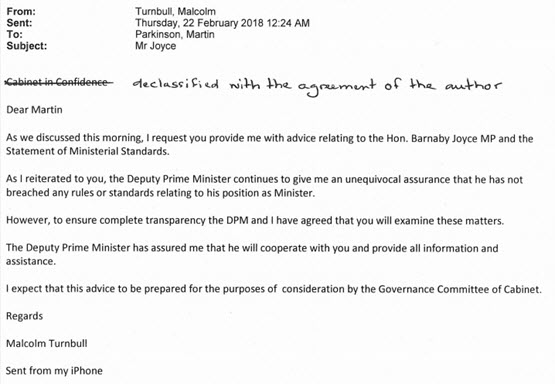 Not that it was sent last Wednesday at 24 minutes past midnight from Turnbull’s iPhone: Turnbull was on his way to the US at that point, and it’s not even clear if that’s AEDT. It’s that Turnbull, after assuring parliament, the media and all and sundry that Joyce had not breached ministerial standards, only decided to ask his department to check that that was actually true two weeks into the saga.

The “official” reason — which you have to work out by combining Malcolm Turnbull’s statements in question time and selected highlights of Mathias Cormann’s afternoon spend fending off the opposition at Senate estimates (only occasionally, pro that he is, flashing his annoyance about the endless questions) — is that there were “constant claims” that Joyce had breached the standards, but Turnbull couldn’t work out how, so he got Parkinson to have a look, after consulting with Barnaby. All fair and above board, nothing to see here — it’s surprising that phrases like “from an abundance of caution” weren’t employed.

The said inquiry was terminated by Parkinson after Joyce’s resignation.

Perhaps Turnbull was annoyed by Joyce’s fightin’ words to Fairfax from his “bachelor pad” and his willingness to keep the story going day after day last week. Perhaps the vaunted reconciliation meeting last Saturday between Turnbull and Joyce — which must’ve been the least comfortable political moment since that Gillard-Rudd anti-love-in during the 2010 election campaign — left Turnbull publicly talking about working with Joyce but privately determined to find a way to off him. But the biggest question is why on earth Turnbull didn’t ask for such an inquiry two weeks before. In particular, why his office, rather than concocting that astonishing blunder of “not his partner”, didn’t think through how the circus around Joyce was going to play out in the days and weeks after the revelation of the affair, and plot how best to head it all off.

If they had, they would have realised being able to say that an internal inquiry was underway to determine if there had been any breaches was the best solution to what might have, and in actual fact did, become a series of drips about possible breaches of standards or allegations of questionable conduct.

If anyone did this, a basic task of political management, then Turnbull rejected the advice. If they didn’t, it confirms yet again that Turnbull’s PMO can’t do the most simple political management tasks. No wonder this whole thing has been an utter shambles.

It beats me how these people can continue to refer to each other as ‘The Honourable”. I’ve never come across such a self serving, inept bunch of expensive time wasters. They are often corrupt, certainly unable to tell the truth, many of them are totally unsuited for the jobs that we pay them to do, and have less honour than my 11 month, sex starved puppy.

I find it constantly astonishing and yet strangely amusing that no-one in this government has the slightest idea that the greater unrepresented unwashed actually know what ‘conflict of interest’ is when they smell it!