A Sydney magistrate has criticised journalist Laura Banks who was assaulted by Salim Mehajer.

Magistrate: “journalist assaulted Mehajer with questions”. A Sydney magistrate has criticised a journalist who was assaulted by colourful former Auburn deputy mayor Salim Mehajer while covering a court case involving him. Magistrate Joanne Keogh found Mehajer guilty on Friday of assaulting Seven’s Laura Banks when he closed a car door on her in April last year, but convicted him without further penalty, saying Banks had led a “predatory” “pack” of journalists in questioning Mehajer.

News.com.au reported that Keogh said Mehajer was himself a victim: “Ironically, the impression created [by footage of the incident] was of Mr Mehajer who was the victim and Ms Banks and her cohorts in the media who were [subjecting him] to the most appalling and predatory behaviour.”

Banks told the court previously she still had pain in her back due to the assault. The MEAA, the union representing journalists, tweeted it was “outraged” at the lack of punishment for assaulting a journalist “in the course of her work”.

Seven Sydney news director Jason Morrison said in a statement: “There were a lot of things said on that day [of the assault], but what is undeniable was that Salim slammed the reporter in the door with such extreme force that she’s left with injuries today, many months on. And, he can now add a criminal conviction for assaulting a woman to his notorious repertoire.”

Isentia boss quits. The boss of Australia’s biggest media monitoring and data insights company Isentia has quit. The company announced yesterday that John Croll was resigning after eight years as CEO. Croll oversaw the disastrous acquisition of King Content and was the last executive remaining at the company who’d been involved in that deal. In an announcement to the ASX, Croll said it was time for a change, and he’d remain in the role for another six months while a replacement is found.

Correction of the day. 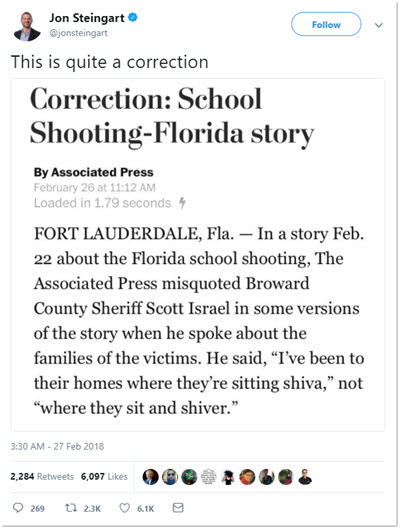 Newsweek’s downfall. The extraordinary implosion of the once-great Newsweek magazine in the US makes a fascinating story. Slate has spoken to more than a dozen insiders across two offices about what’s happened:

Newsweek is coming apart at the seams. On Feb 5, the magazine fired three of its top journalists, including the editor in chief, who had been investigating the financial dealings of its parent company, Newsweek Media Group, in the wake of a surprise raid of its offices by investigators for the Manhattan district attorney. Those firings touched off a cascade of public resignations and recriminations at the once-proud publication, leaving its management jumbled and its newsroom gutted.

Amid the turmoil, the magazine on Feb. 9 announced after an outside investigation that it was reinstating a top editor it had suspended just weeks earlier over sexual harassment allegations at his previous employer. That prompted a fresh exodus of female staffers.

Glenn Dyer’s TV Ratings. Married At First Sight (1.81 million nationally) outdid My Kitchen Rules on Seven (with 1.51 million), giving Nine the night. Seven’s new hospital doctor drama, Resident, is no Good Doctor and the viewers agreed — 874,000 national viewers is just enough, but if they desert next week, it’s a flop. I’m A Celebrity on Ten averaged 803,000. It’s a bit of an afterthought so far as viewers are concerned.

And that was the night. The ABC beat Ten into third with its usual Monday night line-up of news and current affairs programs. While it was close in total people — Nine won with a share of 29.9% to 29.7% for Seven — the real game is in the main channels where Nine was an easy winner — 24.7% to 21.1%.

A sort of media story. On my daily walks in the leafy electorate of Higgins, my route sometimes takes me past the home of one Andrew Bolt. This morning, there was a large truck outside his place, undertaking what looked like major sewerage works. Could be a long job.