Helen Razer shares a long car ride with an Australian journalist who's not afraid to step on the toes of more than a few in the American media.

“Also, we can get more chit-chat in on the road, Razer. Tell me more about your divorce.”

Caitlin Johnstone and the rhythms of her life in this outer Melbourne suburb feel to me so immediately familiar, it’s a snip to forget why I asked for a seat on her sofa. This was not to drink tea and compare a very comparable adolescence with mine. It was to learn how someone with two kids, an irregular CV and a tuxedo cat named Tangles came so quickly to be revered, and reviled, very widely by US readers.

The simple answer is: she’s good. Her self-published writing, which is generally focused on US foreign and domestic policy, can be funded by independent donation because it’s good.

“Questions of injustice, particularly economic and racist injustice, have gnawed at me for as long as I can remember. The question of power — who has it, who doesn’t — is a natural one for me to ask. Now, I’m able to ask it, to reveal its layers, and provide readers with something of an answer.”

Johnstone makes bold but substantiated claims in plain language. She’s a fourth-generation journalist (her dad is Graeme Johnstone, known for years in Melbourne by Herald Sun column “A Place in the Sun”) and a journalism grad who knows the trade’s two big rules by heart: tell the truth and don’t be boring. 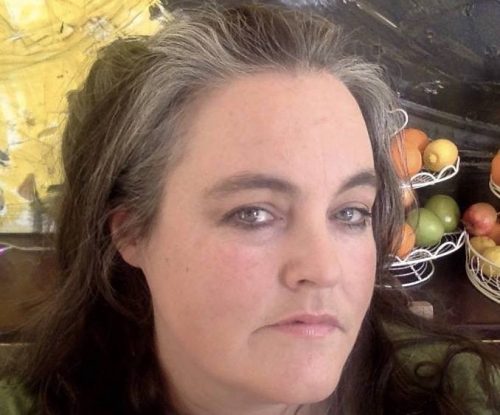 It is true that this Australian provides many US readers with work that may confirm their suspicions of the present. Namely, that the nation and all its institutions are beginning to crack. But it is also true that she approaches her material — this includes the DoJ investigation of Assange, US involvement in Syria, the failure of US press to acknowledge that Trump’s victory is due in part to their ongoing failure to report on economic policy settings that now fail the people — as an old-school journalist.

There’s a less-than-simple answer to the matter of Johnstone’s self-publishing success, one highlighted by the musician Roger Waters who told Pink Floyd faithful to read her blog “because it’s probably the only sensible news you’ll read”. And that is: she’s a cynical naïf. Or, a naïve cynic. Whichever you prefer.

This journalism, like all journalism worth reading, is informed by doubt. The question for the journalist must not be, as it so often is, “How do I restate the version of the truth advanced by the powerful?” but, “How do I advance the truth?” In our era beset by a mania for the truth so hasty and extreme, many would prefer to choose from just two truths — Trump or Clinton; feminist or misogynist; courageous whistle-blower or craven sneaky leaker — Johnstone is a deviant.

She’s a deviant with an audience who are willing to pay for this aberrant truth. Together with research partner Tim Foley, she brings optimism to her pessimistic accounts of the end of empire every day. That’s the reason her value is declared alongside big-name figures of “alternative” US journalism including Amy Goodman and Glenn Greenwald. She’s idealistic about a journalism that no longer exists, and a journalism that demanded pessimism from its most serious practitioners.

On the first day of journalism class in Melbourne years ago, Johnstone had morning sickness. “Got myself knocked up, didn’t I?” she says, and then says how glad she is to have been knocked up, because those kids are “the lights of my life.” Even when they need lifts to Southland.

Johnstone finished the degree, but came to know that working for a mainstream outlet would be a matter of “regurgitating tedious press releases” and not really worth leaving the kids for. She was a sort of proto-mummy blogger for a spell, but lost interest in providing popular posts on environmentally responsible cleaning when large companies offered her large cheques to spruik their products.

“I’d always expected to become a journalist. It was a good trade, a family trade. When I was small, I made myself a ‘press’ card for my hat. Later, I imagined squatting to do my pieces to camera, George Negus-style, with mortar fire and devastation in the background. I’d be a foreign war correspondent.”

Johnstone, I reckon, is now able to believe in and enact the best principles of journalism because she didn’t practice it in its recent and compromised past. In 2016, she returned to the thing she’d always idealised as a pessimistic craft through writing about Bernie Sanders for publication The Inquisitr.

From a rental in the burbs when the kids are at their Australian state school, a former tap-dance teacher enrages and enchants US readers. And then, she drives you home.

Hustling for your journalism: <em>Beacon</em> offers hope — and challenges

Excellent, H, the Caitlin lass is truly worthy. A recent standout, which I read just prior to Mal Formed’s trip to Donnieville, was CJ’s description of Oz as Amerika’s ‘gimp in the basement’. More than just good smithery, that.
A note on your reference to Amy Goodman/Democracy Now. Storms have been brewing for some time, with a cloud burst a day or so back, when they had a very comfy interview with a Syria regime change fan, Wendy Pearlman (she’s found many a regime she fancies seeing changed, over many a year).
A good place to start your ‘research’ is at Max Blumenthal’s twitter (or go to RT, where they quote Max on Twitter) – https://twitter.com/MaxBlumenthal?ref_src=twsrc%5Etfw&ref_url=https%3A%2F%2Fwww.rt.com%2Fnews%2F419853-blumenthal-pearlman-syria-twitter%2F
I was reminded of the Goodman/DemocracyNow storm not just by your mention, but because Blumenthal is one of those who gave Bauer, the ‘senior US reporter’ who called for Caitlin to be thrown off the web, a damn solid thrashing for being a tosser.
He’s a good un’, Blumenthal. If you haven’t read “Goliath: Life and Loathing in Greater Israel”, I thoroughly recommend doing so. A epic work of contemporary investigative and dissident journalism, by a damn fine journo – and fan of Caitlin’s

I know Blumenthal. Yes, he’s great.
As for Democracy Now. Sure, their broadcasts don’t always please me. Thank goodness for them, nonetheless.

More like thank George Soros and the Ford Foundation for them, H.
http://www.discoverthenetworks.org/printgroupProfile.asp?grpid=6891
I came to realise years ago the funding tells most of the story.

Well Helen she sounds so interesting that I tried to sign up to a site she writes for. Sadly, I can only join via Google or Facebook. I don’t do Facebook and Google won’t let me sign up and give the site money unless I agree to them sending me ads and using my internet activity for their own evil purposes. It was AGREE or CANCEL. I cancelled.

You can just check in regularly here, R https://medium.com/@caityjohnstone
I’m not a fan of signing up, either.

Ditto for the link, Helen.

I regularly hit a brick wall with Google or Facebook insisting on joining their insidious cults. Never, not ever.

Oops. I guess I am signed in without my knowledge!

Thank you very much for the link, Helen Razer, I do not know how I ever missed this woman, on the net, I have become a Patreon, and its easy to donate other small amounts to these wonderful minds, occasionally, as the pocket allows.

Likewise – I can’t believe that my voracious reading has not yet brought me to Caitlin’s work. I will also be contributing as and when funds allow. Thanks for the introduction, Helen!

M and D. Hey. I came late to Caitlin, too. A mate demanded to know what I thought of her work just about a month ago, and I had no opinion. Which, as you might imagine, is a terrible state for a person like me.
Anyhow. We’ve fixed it.

I do the odd bit of Patreon too, D. I wish it were a cost-free thing for creators with no financial benefit to the company, all monies straight to the journalist or economist or whoever. Still. It’s what we’ve got and I am happy to be able to fund people I admire or wish to incite directly.

Thanks for this introduction to a worthwhile writer.
I also tried to follow the links to see how I could fund her but kept ending up at an amerikan site which was not very reassuring. (Apart from that loathsome FarceBuch requirement)
If possible to fund her directly I’d like to know how.

You can do it here https://www.patreon.com/caitlinjohnstone
Or PayPal https://www.paypal.me/CaitlinJohnstone
There’s Bitcoin too, but I am afraid I don’t understand/care to understand that pyramid scheme. Good on you for this commitment.

I’m glad you two finally got together. I’ve been reading Caitlin on Medium for a while, and while not always gratified or convinced (she has a tendency to go “I already explained that” and do big pronouncements using sharp language) over time she has made an impression. The feeling that you would find a sisterly soul there was strong.

I must admit, we seem to be from the same foundry!