Australia's biggest rival media companies have joined forces against Rebel Wilson's massive payout. Plus other media tidbits of the day.

Rivals unite against Rebel defo payout. Australia’s biggest rival media companies have joined together to fight the record defamation payout won by actor Rebel Wilson against magazine publisher Bauer Media last year. The Australian reports today that Nine, Seven, Fairfax, News Corp, Macquarie Media and the ABC will file an application today to be heard in Bauer’s appeal against the amount of damages. An affidavit from Macpherson Kelley principal lawyer Justin Quill will be filed, which the Oz says will note a trend of plaintiffs using the Wilson decision, which exceeded the statutory defamation payout cap, as a bargaining chip while negotiating settlements.

Nine turns off NT’s local newsreader. Six months ago, the Nine Network cut local production of its Darwin news bulletin and moved long-time newsreader Jonathon Uptin to present the bulletin from Brisbane with Samantha Heathwood. He told the NT News at the time it would mean the news would still have a Territory face to it: “Even though we’ve still got local journos, local cameramen and there will still be local news stories, it’s nice, in my opinion, to have a familiar face there who gets the local stories, who knows the pronunciation of your local suburbs. I know the stories here, I know the people here.”

But Uptin will no longer grace the TV screens on week nights in the Top End — he’s been promoted to weekend newsreader and sport editor. Nine wouldn’t comment on whether he’d be replaced, or whether the bulletin would be presented alone by his co-host Heathwood.

Good feud guide. Poor Chris Mitchell. The erstwhile editor of the Oz — best known for driving the “national broadsheet” to an eight-figure loss — obviously feels his successor has been less than diligent in pursuing a vendetta against the ABC’s Emma Alberici in the way that Mitchell’s former employee Michael Stutchbury has at the AFR. In the course of bagging Alberici, Mitchell lauded the Oz‘s own economics team. We’re happy to agree that David Uren is outstanding — in fact, since David Crowe’s departure, he’s the only thing worth reading there. Judith Sloan isn’t too bad either, once in a blue moon.

But Henry Ergas? You’re not talking about Henry “partiality and an inability to express an objective expert opinion upon which reliance can be placed” Ergas, are you, Chris? And, of course, Mitchell didn’t contest one fact in Alberici’s article. Then again, nor had the AFR‘s vendetta leader, Aaron Patrick. Actually, we tell a lie — Patrick noted a typo in Alberici’s piece — she had misspelt John Quiggin’s name. It thus amused us today that an AFR article on infrastructure rates of return referred to the “Gratten Institute”. 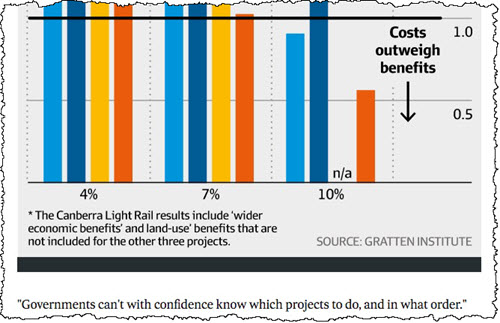 As Crikey has learnt through bitter experience, bagging someone else’s typo is an invitation for Nemesis to come and sprinkle a little bit of magic Typo Dust on one’s own keyboard. — Bernard Keane

The revolving door. Grant “Grunter” Williams, former A Current Affair executive producer, has quietly left the Nine Network, months after he was stood down and then moved into a new role as his program dealt with former reporter Ben McCormack’s child pornography court case. The Daily Telegraph reported over the weekend that staff had complained about Williams’ behaviour after McCormack’s arrest, and that he saw out the end of a contract that was not renewed.

Sky News on free-to-air? News Corp-owned Sky News Australia could be shown on free-to-air television for the first time, if talks with Seven West Media and Nine Entertainment Co about a broadcast deal pan out.  Fairfax reported that the Australian News Channel, which owns Sky News and Sky News Business, approached the two networks about carrying some of their content.

But the key question is who would pay? Would Sky News (i.e. News Corp) pay the revenue-challenged Seven West Media or the not-so-challenged Nine to carry the Sky News broadcasts, or would the Murdoch-owned company try to get revenue from the free-to-air broadcasters. Foxtel refuses to pay the free-to-air networks carriage fees for broadcasting their signal on the pay TV system. In the US, 21st Century Fox insists that cable systems pay it carriage fees for its various channels. And what would be shown? General news? Or, as some in the media think, the post-7pm line up of right-wing ratbags starting with Andrew Bolt and including Peta Credlin, Paul Murray and Alan Jones? — Glenn Dyer

Whatever the weather. Sydney viewers of the ABC’s 7pm news last night were probably trying to stay inside and dry, away from the wettest day in a year. But the ABC’s windowless studio might have been to blame for presenter Juanita Phillips declaring that, in fact, “right now in Sydney the sun is out”. Phillips later tweeted that the graphic and script was based on information from the weather bureau. 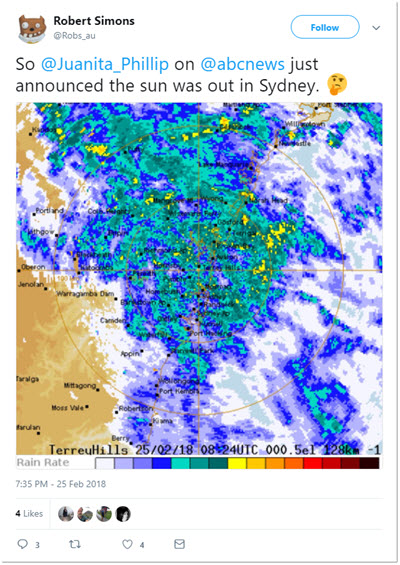 Glenn Dyer’s TV Ratings. After winning  for two straight weeks, Seven went backwards last night as the Winter Games faded, My Kitchen Rules was rested and Australian Spartan started. Spartan averaged 1.21 million nationally, which is just OK for such an expensive program. Nine won with Married at First Sight — 900,000 ahead with its highest ever audience of 2.14 million viewers across the country. These are now dangerous waters for Seven.

Tonight MKR is back in the schedule and there’s the debut of the new US Fox series, The Resident — a medical drama featuring a rebellious resident at a big hospital, a sort of millennial House. That’s three US doctors a week for Seven with The Good Doctor and that stalwart Grey’s Anatomy. Celebrity had an elimination on Ten last night — 995,000 for that and 848,000 for the lead up, which was beaten by the return of Grand Designs to the ABC with 903,000.

Peter van Onslen was Insiders’ gain, and Sky News’ loss. A total 588,000 people watched the Insiders on the main channel of the ABC and ABC News. Riot on the ABC at 8.40 pm — a doco about the inception of the Mardi Gras in Sydney got 296,000. Will more people watch next Sunday’s SBS’s broadcast of Saturday night’s Mardi Gras parade at 8.30 pm?

Missing from the ABC and Fairfax at the time of this writing (unless it’s very well hidden) is any mention of the death of Ainsley Gotto. Is it possible that no-one in what’s left of these organisations has ever heard of her? Sad to relate, Murdoch press all over it.

Thanks Curmudgeon, probably can’t recall the Prime Minister she was associated with either.
On ABC Weather last night.
Not only did Juanita make the sun shine in Sydney she made it rain in Coffs Harbour.
.

And in other amnesiac Millennial news, the frequent mention of Juni Morosi during Barnyard’s troubles had many of my friends under 50 asking “…Who?”.
And what do I find in my local op-shop today but two of her books!

channel seven is like a rudderless ship not knowing which course to set, a new captain and crew is needed desperately before the ship sinks.