Today, the headlines and news bulletins should be saying “Acting Prime Minister Barnaby Joyce”. Of course, they’re not because the Deputy Prime Minister is on a week’s leave. And the Coalition is still in disarray. Prime Minister Malcolm Turnbull decided he could not entrust his terminally tainted deputy with the job and sent him on forced leave to “consider his position”.

The Nationals’ embattled leader returned fire by publicly accusing the PM of being “inept”. He also used his career contemplation break to give a damning interview to The Sydney Morning Herald in which he painted himself as the victim, depicted his plight as a “witch hunt”, and boasted he wasn’t going anywhere. Personally, I still believe in Hinch’s Law: “Any man who says three times ‘I will not resign’ — will.”

Meanwhile out west, the renegade state Nationals were doing their own 2018 version of “we warn the Tsar”. And in New England, Barnaby’s betrayed wife was saying she didn’t want the beetrooter to lose the Deputy PM slot. It’s all got so tawdry that cynics were seeing that plea as an alimony protection ploy for the ex-wife and kids.

As the saga drags on, I’m bracing for news reports like “In other news — at the White House, Prime Minister Turnbull …”. Just what a beleaguered government needs to start the year.

The sad thing is, Malcolm Turnbull ended last year, and started this one, on a comparative high. The first Newspoll shaved a point off Labor’s lead and the PM widened his lead over Bill Shorten as preferred prime minister. That was all BBB (Before Barnaby’s Bullshit). The pragmatism of the Four Horsemen (Turnbull, Morrison, Cormann, Birmingham) had started to work with the crossbench last year and could kick some goals this year. Especially on company tax.

Last year, with crossbench support, they upped Labor’s $2 million cut-off for a 25% levy to $10 million and finally $50 million. They’re going to be pushing it uphill to get multibillion-dollar companies the same blanket reduction unless there are some insurances that all the saved taxes won’t go to share buy-backs and dividends. That there will be, finally, decent wage rises. I’m no expert (as Twitter keeps pointing out) but what if companies had to provide a contract to the ATO showing a built-in wage increase of X dollars over Y years?

I say that because Walmart made headlines, after the Trump tax cuts, with a $1000 bonus for all workers. I think the fine print said something like “only for full-time employees who have been here for 20 years”.

That NN (national nincompoop) George Christensen would post a picture of himself on Facebook brandishing a pistol, at a time when 17 schoolkids and teachers were being buried after another school massacre in the US, is unfathomable. That he would also use the occasion to seemingly threaten Green MPs is mind-boggling. In his “joke” post he said: “You gotta ask yourself, do you feel lucky, Greenie punks?” That’s why I said on Sunrise: “I think the man should apologise on his knees. This is the most disgusting thing I have seen since I’ve been in Canberra.”

On umpteen recent plane trips, I’ve been reading a great book I got for my birthday earlier this month. It’s called There Being No Objection — an Australian Senate Miscellany and was edited by Tim Bryant and Brien Hallett and published by the Department of the Senate in 2013.

A couple of things grabbed me early. I realise that I should have read Odgers’ Australian Senate Practice before I got understandably pilloried for being photographed nodding off during the Governor-General’s speech during the opening ceremony. According to Odgers: “The opening ceremony is not constitutionally required, and is otherwise objectionable in principle, for example … by involving the Governor-General in contentious and partisan statements composed by the prime minister in the opening speech.” Exactly.

But the book lets us down badly when talking about the Whitlam government Dismissal. It says: “Many can remember where they were on December 11 1975 and would be able to identify David Smith, the Official Secretary to the Governor-General, as he read the proclamation dissolving the Senate and the House or Representatives.”

Actually, I have no idea where I was on December 11, 1975. But I do know where I was on November 11, 1975 — when The Dismissal actually happened. How could such an error survive a reprint? It answers one question for me though. It dawned on me why I read far fewer books than I should and would like to. Even with fiction, I read like a subeditor. 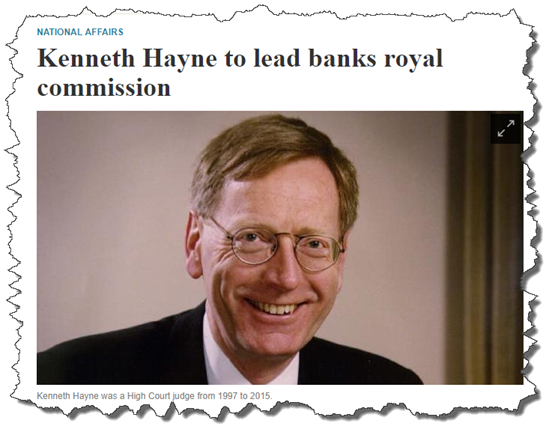 George Christiansen – the chief spokesperson for the Wayne Kerr Institoot – the gNats very own Tink Tank (yes know I left the h out), where a not a lot of tinking has been done over a long period of time. Dunno about the Glokhead picture, the blue singlet, tatt that looked like a stained glass window and stockwhip was pretty disugusting pretty ordinary.
Perhaps you can ask Barnaby when parliament sit whether it is true that Golden Cirlce have offered him a contract to be the face of their canned beetroot line.

Yes Derryn the Walmart ‘fine print did… And the average length of tenure for Walmart employees – 4.5 years.

At the same time Walmart retrenched a few thousand workers from a subsidiary.

I pray never to be in a police lineup when Hinch is identifying a miscreant – Hayne has little resemblance to Gates.

“And the average length of tenure for Walmart employees – 4.5 years.”

Yes, I’ve read Barbara Ehenreich (Nickle and Dimed) too. What you omit is that Walmart’s work conditions are carefully arranged so that no sane person can tolerate working for longer–and thus the short tenure and the “self-sacrifice” of benefits tied to tenure (longer than the average before they kick in). Further, that a vast majority of those who quit working for Walmart, eventually come back and do another stint. In fact it is a regular thing and expected of their employees. Capitalism has become so damned crafty. Let’s not forget the astounding fact that the Walmart family (5 offspring of Sam’s none of whom have worked for a dime their entire lives but each now rich beyond imagining) have total wealth more than the entire bottom 40% of Americans.
And of course the earnings of most workers at Walmart is part of America’s “working poor”, ie. not enough to live on. Further, under pressure from the Obama administration Walmart actually began increasing their miserable wage rates in 2015 when it went up to $9/h with further increases on the books. In December last year they began giving its employees early access to part of their paychecks, but what more incriminating evidence does one need that the pay isn’t enough? It’s a wonder Walmart don’t start up their own inhouse Payday Loans outfit to profit even more off their own employees (maybe they will, now that Trump has rolled back Obama’s reforms on the worst practices of that predatory industry).

Interestingly there isn’t a single Walmart inside the 5 boroughs of New York City despite them trying for decades and decades.

“Disgusting”… says the has-been who spent his life doing similar (and more loathsome) stunts.
He’s you – before you died.

The gun stunt was classic throwing a dead cat on the table.
The dead and damaged in Florida were collateral damage for our Georgie, he needed to divert us from the Joyce obsession for a while.
Not sure what was more disgusting, the gun or him in his sweat stained shirt.

Does anyone actually know if the Joyces are yet actually divorced?
Some say ex-wife, some still say wife.
That the marriage has broken down irretrievably is certain. But I imagine the divorce settlement will take yonks.
And will the Beetrooter seek an annulment so that he can re-marry within the church?

He’s not Henry VIII! As much as he reckons he is a true blue, my bloody oath catholic, my money would be on a divorce. He believes in nothing but his own skin.

Derryn…if you, and that motley crew you call the cross-bench, pass the $65 billion tax cuts for business legislation…then you will have fulfilled the moniker given to you by the great PJ Keating……..’unrepresentative swill’!!